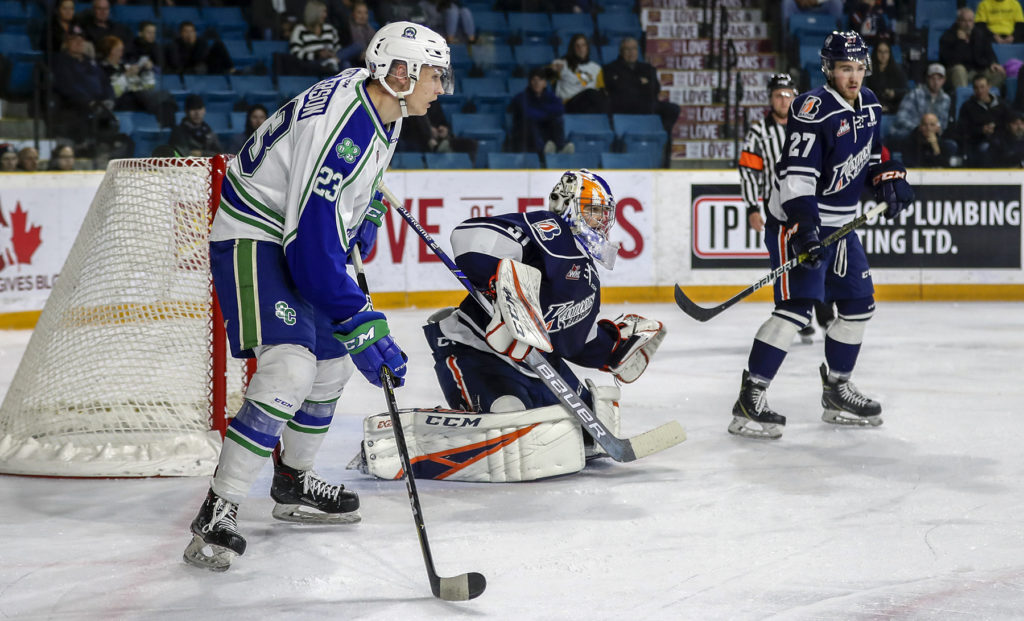 The Swift Current Broncos and Kamloops Blazers met for their lone meeting of the season on Friday night at the Sandman Centre and Swift Current came out to play in what was a competitive affair.

Broncos forward Alec Zawatsky buried his team-high fifth goal of the season when he made a slick play to deke around the Blazers defenceman before beating goaltender Dylan Ferguson to give the Broncos an early 1-0 lead.

Kamloops got on the board at the 10:48 mark of the second period on a power play chance. Connor Zary walked in from the left point towards the left faceoff dot and released a wrist shot that beat Broncos goaltender Joel Hofer.

The Broncos got their one-goal lead back minutes later as Joona Kiviniemi netted his second goal in as many nights. Forward Matthew Culling entered the zone down the right wing, cut towards the goal and let go a shot that hit the far post but Kiviniemi crashed the net to bang home the bouncing puck.

Swift Current suffered some bad luck before the middle period was up when Luc Smith scored Kamloops second power play marker. Smith was stationed behind the Broncos goal and his centering pass deflected off a skate in front and by Hofer. It was a 2-2 score entering the final frame with shots on goal favouring Kamloops 26-13.

It took only 15 seconds of third period play for Kamloops to get their first lead of the night when forward Zane Franklin scored.

The Broncos continued to battle hard as they earned a power play opportunity due to Brodi Stuart getting a delay of game penalty. It was a special moment for Broncos forward Max Patterson who’s hometown is Kamloops, BC powered for position in the Blazer crease, gobbled up a rebound and notched his second goal of the year to knot the game up 3-3. Culling registered an assist for his second point on the night.

Effort was made all night long by the Broncos but the tie was broken by Blazers forward Josh Pillar with a little over three minutes to go in regulation.

Swift Current pulled Hofer for the extra attacker with 2:32 to go in regulation but the Blazers’ Smith added an empty netter to seal a 5-3 victory.

Shots on goal were 40-24 in favour of Kamloops. Swift Current went 1/4 on the power play while Kamloops scored a pair on the man advantage in five opportunities.

Swift Current will be heading north bound for a Sunday afternoon matinee against the Prince George Cougars. Puck drop is scheduled for 3:00pm MT.