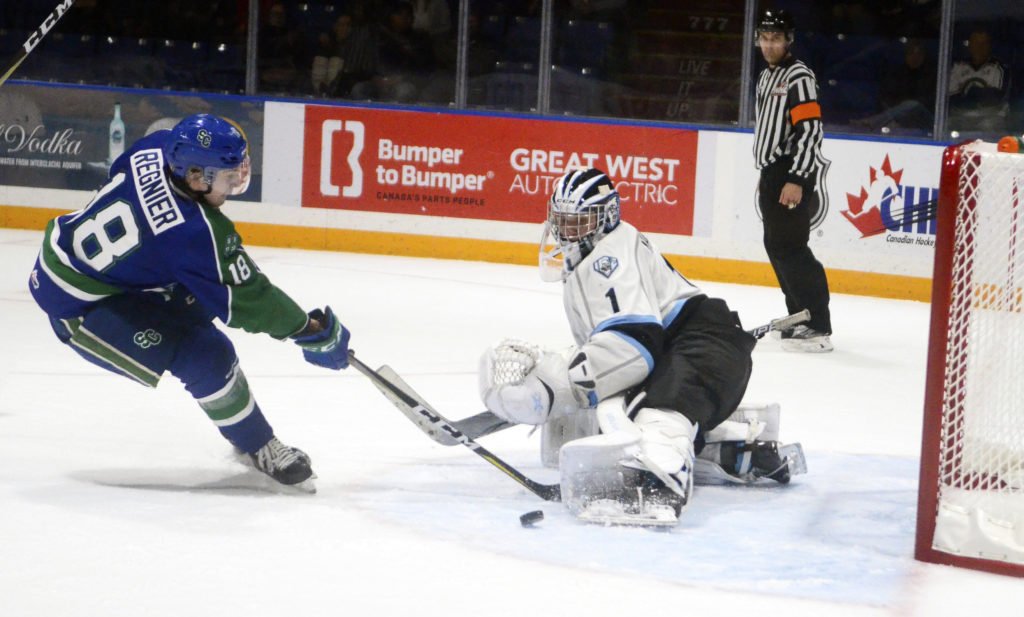 Joel Hofer and the Swift Current Broncos played very well in a closely contested battle against the Kootenay ICE on Tuesday night at the Innovation Credit Union i-Plex. It took a shootout to settle this tilt and unfortunately for the Broncos, it was Kootenay that escaped with a 2-1 victory.

Swift Current came out with energy and crisp play making in the first period, slamming 20 shots on goal in the frame and getting a goal out of forward Ethan Regnier. The Prince Albert, SK was set up for a partial breakaway thanks to a good pass from Andrew Fyten and Regnier went five-hole on ICE netminder Jesse Makaj to make it 1-0.

13 shots were recorded for both Swift Current and Kootenay in the second period but the Broncos’ Hofer and ICE’s Makaj were up to the challenge, denying every puck sent their way to keep it a one-goal game.

Broncos forward Ethan O’Rourke took a two minute boarding penalty with 4:46 left in regulation play and the ICE drew even when Brett Davis recorded his sixth of the season.

ICE forward Jaeger White went to the sin bin for four minutes at the end of regulation for slew-footing, giving the Broncos a four minute power play to start overtime. Swift Current had chance after chance to end it including a post that required video review to see if the puck crossed the line but to no prevail.

A shootout was necessary and Kootenay took advantage as both Davis and Peyton Krebs scored to help Kootenay escape with the 2-1 nod.

Shots on goal were 42-29 in favour of Swift Current. The Broncos power play went 0/4 while the Kootenay ICE finished the evening 1/2.

Next up for the Broncos is a clash against the Lethbridge Hurricanes on Friday, November 2nd for Broncos Strong night. Swift Current will be wearing Humboldt themed jerseys as a tribute to all those affected by the 1986 Swift Current bus accident and 2018 Humboldt Broncos bus accident. Puck drop is set for 7:00pm MT.