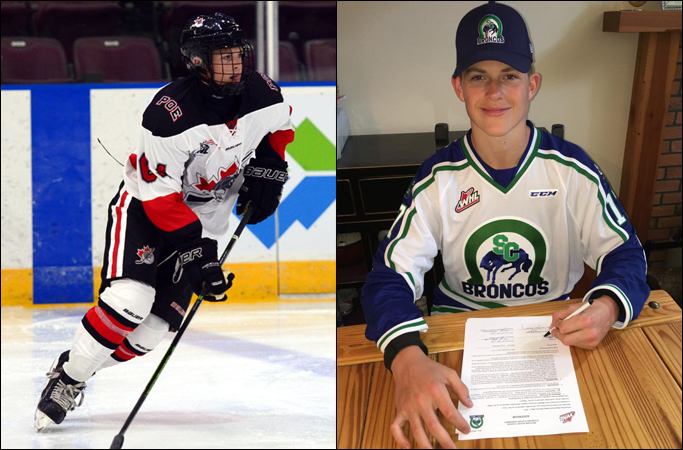 Swift Current, SK – The Swift Current Broncos put pen to paper as forward Ben King who was the 13th overall selection at the 2017 WHL Bantam Draft, signed a WHL Standard Player Agreement with the club a couple weeks after having his name called.

“We’re really excited to have King join this group,” said Director of Hockey Operations Jamie Porter. “He’s demonstrated his commitment to our program and we vision him being a solid two-way player for us in the future.”

A product of Vernon, BC, the 6′, 159lb King spent his 2016-17 season with the Pursuit of Excellence Bantam Prep squad of the Canadian Sport School Hockey League where he racked up 46 points (16g-30a) in 22 regular season games. Furthermore, King suited up for the Pursuit of Excellence at the John Reid Memorial AAA Hockey tournament and contributed on the score sheet with 10 points (2g-8a) in six games.

Season tickets for the 2017-18 campaign are on sale now with the Early Bird Deadline set at May 31st. Purchase your seats by calling 306-773-1509 ext. 1 or visit the Stable during summer box office hours.