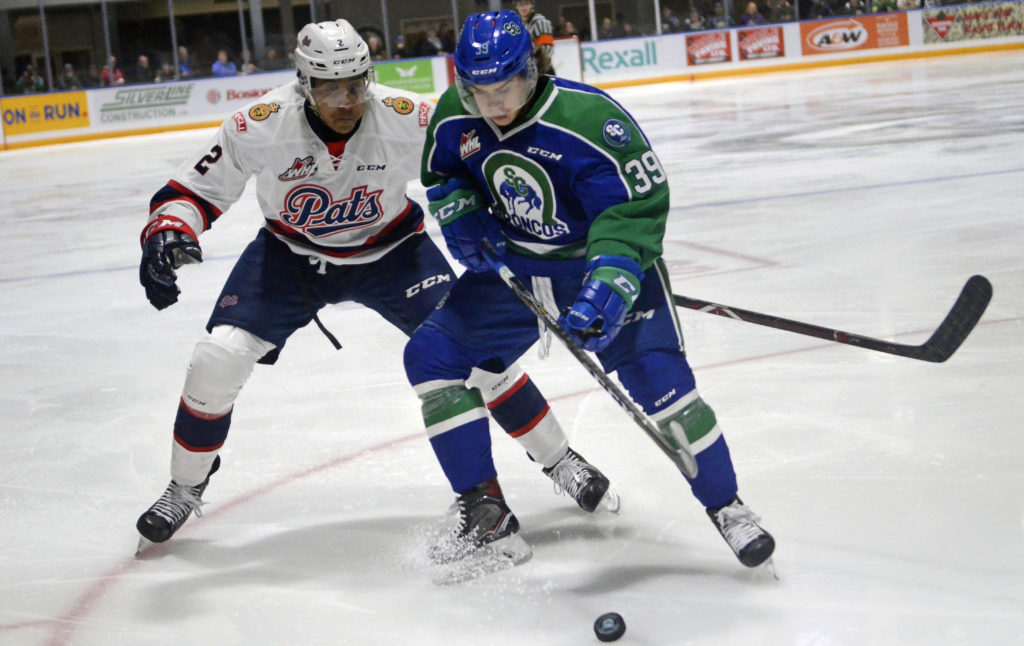 The Swift Current Broncos and Regina Pats tangled for the first time since the Broncos eliminated their rival in seven games in Round One of the 2018 WHL Playoffs last season. In a game that saw five power play goals between the two clubs, Swift Current dropped a 6-5 margin in a heated tilt.

Alec Zawatsky turned on the jets and put himself in a position in which he was on a partial breakaway and got slashed by Pats blue liner Nikita Sedov. Zawatsky then buried his first goal as a Bronco on that same power play chance to give Swift Current a 1-0 lead.

The Pats tied it up at the 13:10 mark of the first period as Duncan Pierce gathered his second goal of the season.

Then 10 seconds after the Broncos Ethan O’Rourke went to the penalty box for a tripping minor, Pats forward Jake Leschyshyn capped off a tic-tac-toe play from the left faceoff dot and beat Broncos goaltender Joel Hofer low to spring the Pats ahead 2-1.

Shots on goal were 21-9 in favour of Regina heading into the second period.

Forward Eric Houk recorded his first goal as a Bronco as the 18-year-old took a smooth cross ice pass from linemate Owen Blocker and one-timed it by Pats netminder Dean McNabb to tie it 2-2.

The Pats got their one-goal lead back seconds before the intermission goal horn as Austin Pratt scored for Regina. The third period was wild with end-to-end action that included plenty of scoring opportunities and physical play.

Prince Albert, SK product Ethan Regnier jumped on a rebound off an initial shot from Noah King and buried the puck by McNabb to quickly tie the game at three goals apiece just 47 seconds into the third.

The Regina Pats haulted the Broncos momentum as Robbie Holmes scored the go ahead goal, followed by Pratt’s second tally of the night. Penalty trouble resulted in a five-on-three man advantage for Regina which led to Jake Leschyshyn scoring the sixth goal of the night for the visiting team.

Swift Current wasn’t finished yet though as Zawatsky got possession of the puck, found some open ice down the left wing and released a knuckler that seemed to fool McNabb, making it a 6-4 hockey game.

Then 20-year-old forward Andrew Fyten capitalized on a rebound and banged in his first of the season on a Bronco power play to close the gap to a single goal. For Fyten, that was his second point to go along with an assist he recorded earlier on Zawatsky’s first goal.

Swift Current pulled Hofer for the extra attacker and generated a solid scoring chance but they fell short 6-5 to the Pats.

Shots on goal were 46-29 in favour of Regina. The Pats power play went 2/6 while the Broncos clicked for three goals on their man advantages.

Swift Current is right back in the fold on Saturday, October 6th when they meet another East Division rival in the Moose Jaw Warriors at Mosaic Place. Puck drop is set for 7:00pm.