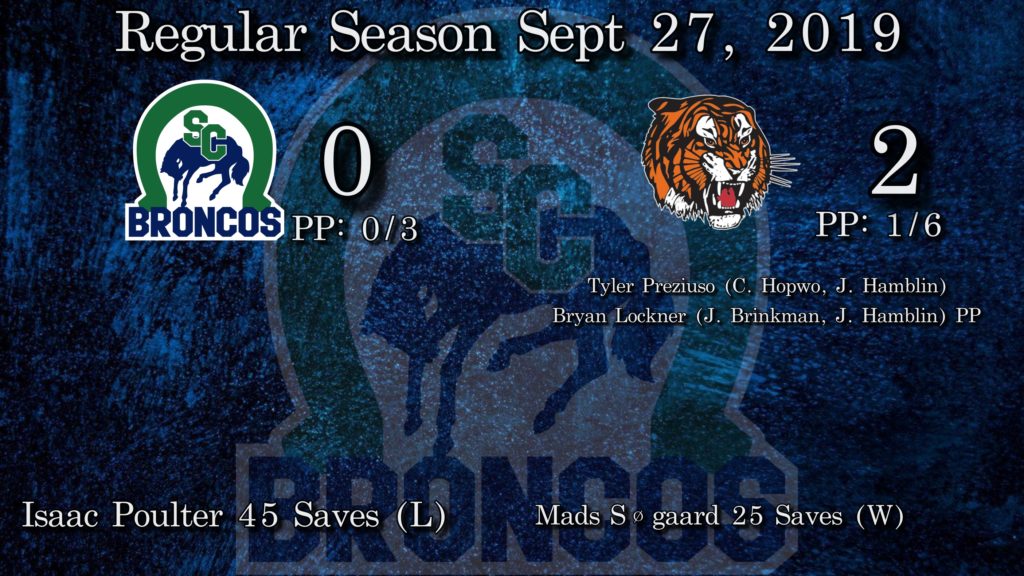 A scoreless first period saw solid scoring chances for each team, including Ethan O’Rourke just missing the net high on a 2-on-1 rush, and Ben King redirecting a puck just over the net off a long centring pass. The shots read 15-7 in favour of the Tigers through 20.

The Broncos found a step in the second, out shooting the Tigers 13-7 but unable to solve Søgaard in the Tigers crease.

Medicine Hat rebounded in the third as they came out with some jump in the third. After Isaac Poulter made a marvelous save off a turnover behind the net, the Tigers would score on the next shift.

After the puck was sent to the front of the net, Poulter was laying on his stomach looking for it when Tyler Preziuso poked it over him and into the net to give the Tigers a 1-0 lead 2:34 into the third.

Swift Current had a power play a few minutes later, but couldn’t gain the Tigers zone to create any offence.\

Medicine Hat would seal the victory with a power-play goal of their own, as Bryan Lockner beat Poulter under the blocker while streaking down the wing. The goal came with just five minutes left in regulation.

The final shots would read 47-25 in favour of Medicine Hat, and 25-5 in the third period as Søgaard picked up the shutout.

The two teams will match up again tomorrow night in Medicine Hat as the Broncos look to split the weekend series.