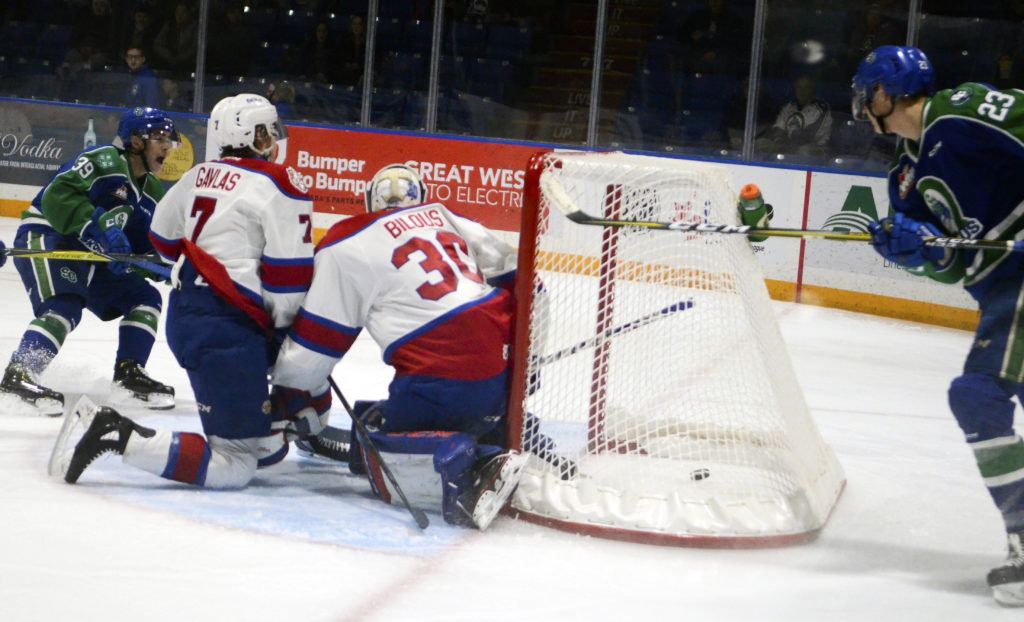 The red light was lit and the goal horns sounded on multiple occasions on Saturday night as the Swift Current Broncos ended a five-game losing streak in defeating the visiting Edmonton Oil Kings by a score of 3-2.

The Broncos long scoring drought came to a hault with 14 seconds left in the first period as 20-year-old forward Andrew Fyten made a terrific individual play. Fyten skated out of the corner in Oil Kings territory and quickly snuck a backhander from in close by Oil Kings netminder Boston Bilous, rewarding Swift Current a 1-0 lead that they carried into the second period.

Rookie forward Ben King doubled the Swift Current lead to 2-0 when his team was on an early power play. For King, the goal marked his fifth on the season while Max Patterson and Connor Horning recorded assists.

The Oil Kings made things interesting midway through the second period, scoring twice in a 2:01 span. Forward Brett Kemp banked one in off the back pad of Broncos goaltender Isaac Poulter and that was followed by Ethan Cap one-timing home his third of the year on an Oil Kings power play.

The tie score only lasted 15 seconds as the home team quickly fought back to earn their one goal lead. Patterson collected his seventh with King and Horning earning assists, giving all three players two points.

Broncos goaltender Isaac Poulter did the rest as the 16-year-old Winnipeg, MB native blocked 12 Oil Kings shots in the third period to secure the 3-2 win for Swift Current.

Shots on goal were 31-22 in favour of Edmonton. The Broncos power play went 1/5 while the Oil Kings finished 1/4.

Swift Current wraps up its five-game home stand on Wednesday, November 28th when they welcome the Brandon Wheat Kings to the i-Plex. Puck drop is slated for 7:00pm CT.