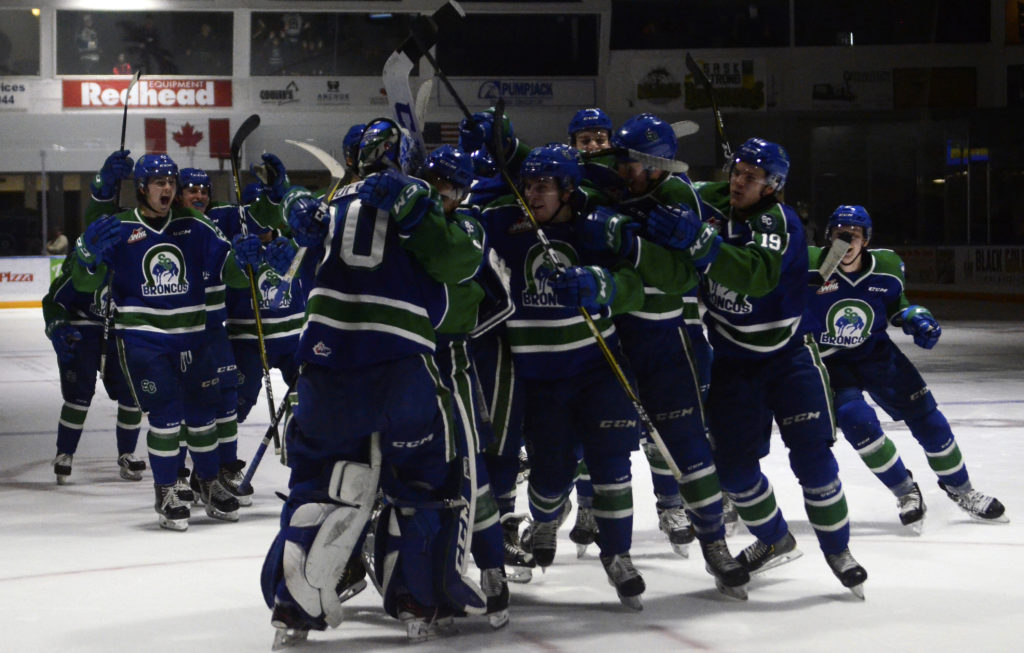 The Swift Current Broncos stunned the Prince Albert Raiders on Tuesday night as they picked up their fifth win of the season and also snapped the Raiders 19-game win streak while at it with a 3-2 shootout win.

Tanner Nagel got things started for the Broncos on a man advantage chance as the Mossbank, SK product redirected an Andrew Fyten pass through the legs of Raiders netminder Ian Scott to give Swift Current a 1-0 lead.

The Raiders tied it up at the 9:59 mark of the first period when Brett Leason and Parker Kelly put together a well executed give-and-go play with Leason finishing it off to knot the game 1-1.

Prince Albert was piling on the shots in the second period, 17 to be exact but the score remained deadlocked at 1-1 through two periods of action.

Swift Current skaters Alec Zawatsky and Billy Sowa received minor penalties back to back in the third period but Hofer and the penalty kill units survived the Raiders daunting power play.

The Raiders did crack Hofer though as team captain Brayden Pachal scored with 8:55 remaining in regulation to temporarily give Prince Albert a 2-1 advantage.

Late in the contest, Prince Albert, SK product Ethan Regnier scored an unassisted marker to send this crowd into a frenzy. The goal marked Regnier’s fifth of the season.

Overtime was necessary and the Raiders held possession of the puck for the majority of extra time but Hofer stopped the four shots sent his way to get this contest into a shootout.

Regnier scored the lone goal in the shootout while Hofer rounded up 52 saves to help Swift Current secure an incredible 3-2 victory.

Shots on goal favoured the Raiders by a 54-23 margin. Prince Albert went 0/4 on the power play while Swift Current finished 1/5 on the man advantage.

Swift Current hits the road for a mini two-game swing beginning with a date vs. the Central Division’s Calgary Hitmen on Friday, December 7th at the Scotiabank Saddledome. Puck drop is set for 8:00pm CT.