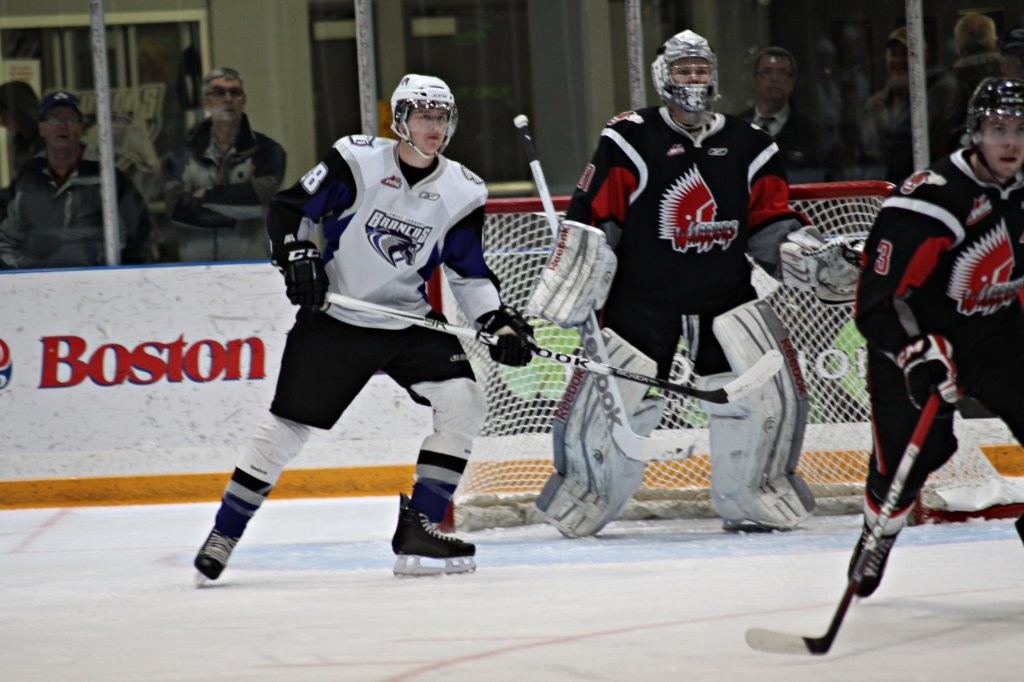 The Swift Current Broncos fell 5-2 to the visiting Moose Jaw Warriors Saturday night in front of a crowd of 2,435.

Ryon Moser would open the scoring just over a minute into play on his 14th of the year to give the Broncos an early lead.  But, 16-year-old Brayden Point would capitalize on the Warriors second power play opportunity of the evening in the dying minutes of the first period to tie the contest up at one.

Play would remain 1-1 until roughly 16 minutes into the second frame when Bryson Gore would tally his fifth of the year to give the Warriors their first lead of the evening.

A penalty shot would be awarded to Warriors’ Tanner Eberle minutes into the third period where he would capitalize shooting one past netminder Landon Bow to extend Moose Jaw’s lead to two.  But, the lead would soon be cut back down to one as defenceman Reece Scarlett would follow through off of a feed from Adam Lowry under two minutes later.  Justin Kirsch would restore Moose Jaw’s two goal lead in the dying minutes of play on his 16th of the year.  Then a late power play for the Warriors would allow Sam Fioretti to capitalize as he notched his 25th of the season  resulting in a 5-2 final.

The Broncos outshot the Warriors 34-24, but went 0 for 3 on the man advantage.

UP NEXT:  The Broncos host the Calgary Hitmen on Wednesday, January 30th.  Then, the Broncos visit the Edmonton Oil Kings on Friday, February 1st.

Reece Scarlett (1G,1A) and Adam Lowry (2A) had multi-point games.

With the loss, the Broncos snapped their seven game win streak.