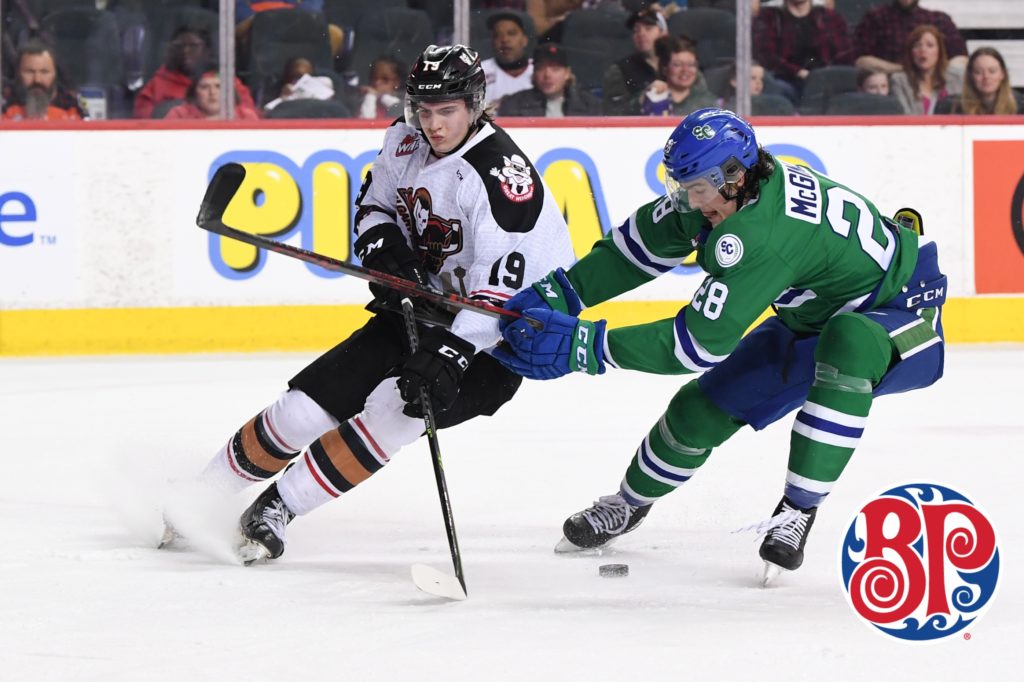 Calgary, Alta. – The Swift Current Broncos (26-33-5-2) fell behind early and ran into penalty trouble against the Calgary Hitmen (25-31-6-2) Sunday afternoon, dropping a 5-2 game at the Scotiabank Saddledome.

The game didn’t get off to a great start for the Broncos as the Hitmen jumped out to a 1-0 lead just under five minutes after puck drop. David Adaszynski dumped the puck in from centre ice and chased after it on the forecheck.

Adaszynki was able to recover the puck and threw it out to the slot where it deflected to Steel Quiring, and his shot went off the post and in to put Calgary ahead early.

The Hitmen were clearly the better team in the early going of Sunday’s game, not only leading 1-0 but at one point outshooting the Broncos 8-0. Swift Current began to get their legs under them as the period went on, but not before Calgary added to their lead.

Off a similar-looking play to their first goal, Calgary sent the puck behind the Bronco net before recovering it and working it to the slot. Tyson Galloway then fired through traffic, putting the Hitmen up 2-0 with 6:24 remaining in the first period.

Swift Current responded perfectly to the goal, cutting into Calgary’s lead just over a minute later. Mathew Ward gained the Calgary blue line and slid the puck to Eric Van Impe on right wing, before he spotted Josh Filmon heading toward the back post.

Van Impe fired a perfect pass to the tape of Filmon, and he took the pass on his forehand before pulling it to his backhand and sliding it past Brayden Peters for his 23rd of the year, cutting Calgary’s lead down to 2-1.

The Broncos went to the penalty kill shortly after the goal, but created dangerous offensive chances while down a man. Ward and Raphael Pelletier wreaked havoc in Calgary’s zone while shorthanded, including a partial breakaway for Pelletier who was denied by the glove of Peters.

The first period came to an end with the Broncos trailing 2-1 and the shots 15-9 Hitmen.

After killing off 19 seconds of Calgary’s carry over power play to start the second period, Ward was robbed by the left pad of Peters off the rush. Filmon backhanded the puck down low for Ward but Peters stretched out with the left pad and took away the tying goal just 45 seconds into the period.

The Broncos ran into penalty trouble throughout the opening 40 minutes, taking six straight minor penalties. Calgary entered play Sunday with the lowest-ranked power play in the WHL, but capitalized on their fourth chance of the game.

Zac Funk skated over the Bronco blue line and was able to slip through the defence before lifting a shot over the glove of Poulter and in, pushing Calgary’s lead to 3-1 just under nine minutes into the second period.

The penalty trouble continued in the second half of the period as the Broncos got hit with two more minor penalties before the second period came to an end.

The Hitmen then added to their lead early in the third period as Grayden Siepmann swept in a loose puck in the crease off the rush, putting the Broncos in a 4-1 hole 5:30 into the final frame.

After killing off another Calgary power play, the Broncos went to a man advantage of their own and cut into the lead. After a brief 14-second five-on-three power play expired, Karson King banged in a rebound at the top of the crease to cut Calgary’s lead to 4-2 with 6:29 to play. The goal extended King’s point streak to nine games.

The Broncos pulled Poulter in the final minutes, but Trey Patterson hit the empty net on a clearing attempt from behind his own goal, sealing the 5-2 Calgary win.

The Broncos are now off until Friday when they welcome the Regina Pats (24-33-3-2) to the Innovation Credit Union iPlex.