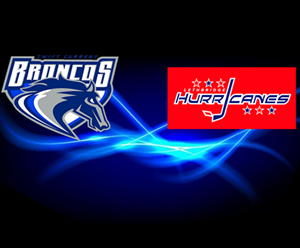 A two goal effort from Broncos captain Adam Lowry led the Swift Current Broncos to a thrilling 3-2 shootout victory over the Lethbridge Hurricanes at the ENMAX Centre Saturday night.

Daniel Johnston would open the scoring under five minutes into play on the man advantage to give the Hurricanes an early 1-0 lead.

Lethbridge would carry their one goal lead up until exactly four minutes into the third period when Lenny Hackman would get two minutes for hooking allowing Lowry to capitalize on the man advantage and tie the game up at two.  In the dying minutes of regulation, Lowry would come back for more, tallying his 27th of the season (and second of the evening) to give Swift Current their first lead of the night.  But, Sam Mckechnie would respond for the Hurricanes seconds later with the equalizer to send the contest to overtime.

The extra frame would solve nothing as the game would remain tied at two, resulting in a shootout.  The Hurricanes would send out Mckechnie and Russell Maxwell with neither getting past netminder Landon Bow, while Lowry and Graham Black would each stun Ty Rimmer resulting in a 3-2 final.

The Broncos outshot the Hurricanes 42-36 and went 1 for 4 on the man advantage.

UP NEXT: The Broncos host the Red Deer Rebels on Wednesday, January 9th.  Then, the Broncos welcome the Prince Albert Raiders on Friday, January 11th.

Landon Bow made his 12th appearance between the posts for the Broncos this season, stopping 34 of 36 shots he faced and improving his record to 4-3-1.