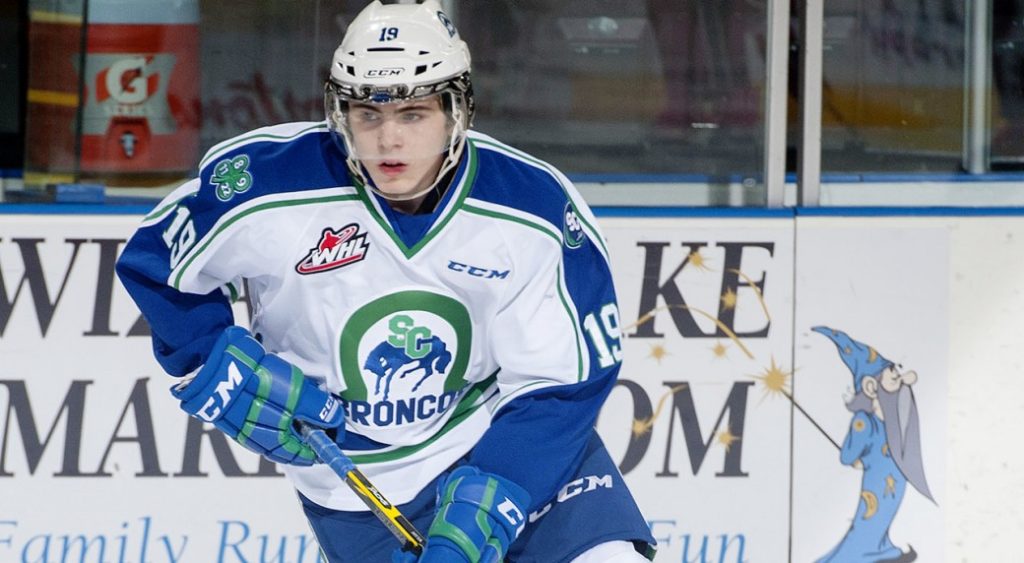 With the 2020 WHL Bantam Draft approaching fast, we’re looking back to previous drafts in Swift Current Broncos history and how they played a role in the organizations history. Next up, 2011.

The Swift Current Broncos held a bevy of draft picks entering the 2011 WHL Bantam Draft, including the second overall pick following a tough regular season which saw them go 26-44-0-2. In all, Swift Current added 12 prospects to their organization during the 2011 draft.

Swift Current had previously moved their 2011 fourth-round pick to Edmonton, which was used to draft goalie Derek Mazil, who never played in the WHL.

The Broncos 5th-round pick in 2011 was traded to the Kelowna Rockets at the 2010 trade deadline in exchange for Kyle Verdino. Verdino played 95 games with the Broncos recording 26 points before being traded to Seattle before his 20-year-old season for a conditional 5th in 2013. Kelowna selected goalie Thomas Spence with the Broncos pick, who never played in the WHL.

The Broncos 6th-round pick in 2011 was traded to the Vancouver Giants for goaltender Derek Tendler in October of 2010. Tendler played just nine games with the Broncos before finishing his junior eligibility in Junior ‘A’. With the pick, Vancouver drafted Taylor Vickerman who went on to play 157 WHL games with Vancouver and Tri-City.

Another deadline deal, though in 2010, saw the Broncos acquire a 2011 fifth rounder from Ti-City for forward Mike Brown.

The Broncos picked up a 7th-round pick from Seattle before the draft, which proved to be the key aspect of the 2011 Bantam Draft for the Broncos, as that pick was used to select Jake Debrusk.

Lastly, Swift Current had Kelowna’s pick in the 10th round.

With the second overall pick the Broncos selected defenceman Brycen Martin out of Calgary. Martin would play two and a half seasons with the Broncos scoring 10 goals and 62 assists. He was also drafted in the third round, 74th overall by the Buffalo Sabres in 2014. Martin was eventually dealt to Saskatoon for Jordan Thomson and a 2016 first-round pick.

With the 13th overall pick Swift Current stayed in Alberta, selecting forward Zack Gonek of St. Albert. Gonek never played for the Broncos as he was traded to Prince George before reaching the WHL in exchange for Jordan Harris.

With their own second-round pick, the Broncos drafted Dakota Odgers out of the Melville Millionaires program 24th overall. Odgers would play 74 regular seaosn games in a Broncos jersey before a trade to the Vancouver Giants for a 2015 5th.

At 39th overall, Swift Current drafted Cavin Leth from Taber, Alberta. After one season of Midget and one season of Junior ‘A’, Leth joined the Broncos in 2013-14 and suited up for 159 games as a Bronco before being traded to Seattle for Sahvan Khaira.

In the third round the Broncos stayed local and selected Stewart Valley’s Jordan Wittman 46th overall. Wittman played for the Swift Current Legionnaires for two seasons following the draft, but just three games with the Broncos.

The Broncos next pick came at 104th overall as they picked goaltender Alec Dillon in the fifth round. Dillon never played for the Broncos and was traded to Edmonton along with a conditional 2015 4th for defenceman Stephen Shmoorkoff.

With their first of two picks in the seventh round, Swift Current went to the West Coast and drafted Christos Koukis from California. He never came to the WHL, instead playing Junior ‘A’ in Wenatchee, Washington before attending the University of Denver.

The Broncos second seventh-round pick was about as big a home run as you could hit. Taken 137th overall was forward Jake Debrusk from Edmonton. Two seasons of midget hockey later, Debrusk burst onto the scene with a 39-point rookie season, followed by an 81-point draft year. Being a late birthday, Debrusk was eligible for the 2015 NHL Draft and was selected 14th overall by the Boston Bruins. Debrusk put up 146 points as a Bronco before being traded to Red Deer to help with their Memorial Cup run in 2016. In return, the Broncos received Lane Pederson, a third in 2016 and a first in 2017. The third rounder turned into Connor Horning while the first rounder turned out to be Joel Sexsmith who, ironically, is now a member of the Rebels.

The Broncos eighth-round selection, Viktor Dombrovskiy, never played for the Broncos or in the WHL. He spent three seasons in the BCHL before attending Harvard, finishing his NCAA eligibility in 2018-19.

The Broncos ninth-round pick, Cameron Hughes, also didn’t play in the WHL. After two years in the AJHL, Hughes attended the University of Wisconsin for four years. He was a fifth-round pick of the Boston Bruins in 2015 and made his NHL debut this past season.

Swift Current rounded out the 2011 WHL Bantam Draft with two picks in the 10th round, first selecting Riley Welsh from Oakbank 200th overall and Cole Bevan of Surrey 213th overall. Welsh didn’t play in the WHL while Bevan had a brief 18-game stint with the Broncos. Bevan was traded, along with a 2015 7th, to Saskatoon for defenceman Ayrton Nikkel.