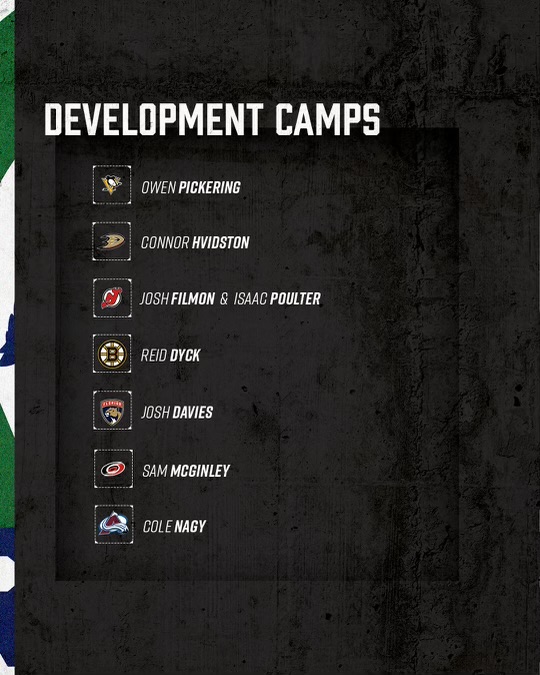 Swift Current, Sask. – The Swift Current Broncos are proud to announce that eight members of their 2021-22 roster are attending NHL development camps over the coming weeks. That includes the five players drafted in the 2022 NHL Draft, and three members who are being invited by teams.

Hvidston, from Tisdale, Sask., was the first Bronco to be drafted during day two of the 2022 NHL Draft when the Anaheim Ducks selected him with the 139th overall pick. One of the youngest players eligible for the draft, Hvidston had an impressive rookie campaign in the WHL, registering 32 points (13-19-32) in 58 games.

Dyck, from Winkler, Man., was selected by the Bruins with the 183rd overall pick in the 2022 NHL Draft, and appeared in 23 games for Swift Current in 2021-22, posting a 6-12-1-0 record. Invited to the CHL/NHL Top Prospects Game in March, Dyck stole the spotlight after entering the game in the second period, eventually turning aside all 23 shots sent his way. He was also named one of Team Canada’s top three players during the 2022 World U18 Hockey Championship in Germany.

Davies, from Airdrie, Alta., was chosen by the Panthers with the 186th overall pick in the 2022 NHL Draft, and provided strong secondary scoring for the Broncos while also bringing intense physicality to the ice during the 2021-22 season. Recording 36 points (16-20-36) in 64 games, Davies also led the Broncos in penalty minutes with 119. That also placed him third in the entire WHL.

Poulter, from Winnipeg, Man., graduates from the WHL after a sterling season in 2021-22. For the third straight season, Poulter was named the Broncos Team MVP after shattering career highs across the board. Poulter went 20-23-4-2 with a 3.00 goals against average and a .911 save percentage. He also posted five shutouts. He signed a one year, two-way contract with the Utica Comets in June.

McGinley, from Calgary, Alta., provided a steady two-way prescence for Swift Current in 2021-22, regularly matching up against other team’s top players while also providing 21 points (7-14-21) on offence. He set career highs across the board offensively in his third full season in the WHL.

Nagy, from Saskatoon, Sask., also graduates from the WHL after a strong final season in Swift Current. Appearing in 48 games, the 6’6’’ centreman recorded 34 points (14-20-34), more than doubling his previous career high. He also led the Broncos with a 54.6 per cent face off win percentage. Nagy is slated to attend Acadia University in Wolfville, Nova Scotia in the fall of 2022.

The Broncos would like to congratulate their eight players and wish them best of luck during their respective development camps.