Estephan does it again, scores twice as Broncos edge Canes 4-3 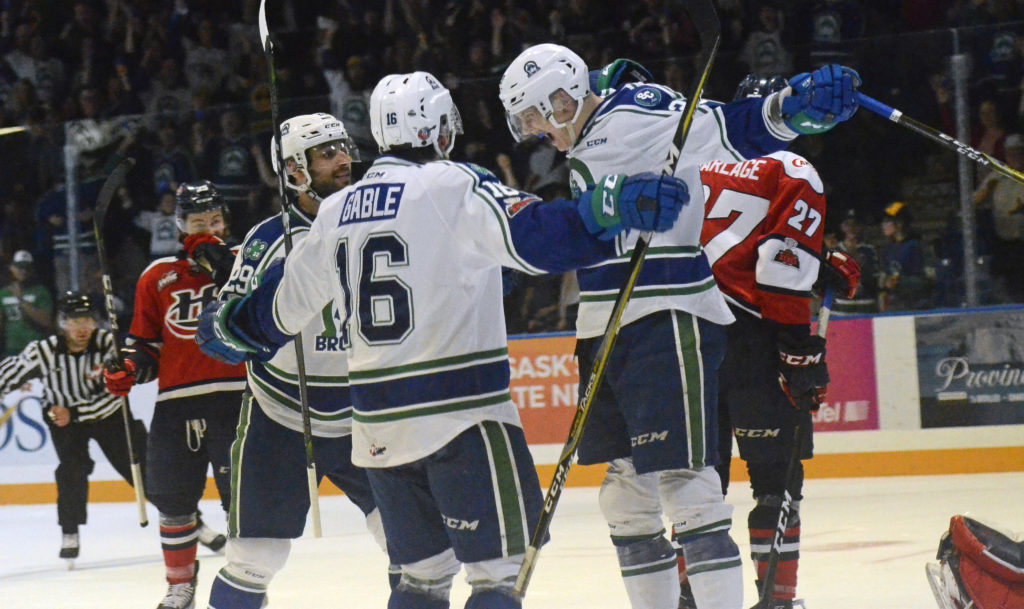 Defensive dominance was the first period story as both clubs were not willing to give up any scoring chances as the play was tight checking and physical. The Broncos killed off a pair of penalties in the opening frame while Broncos forward Tanner Nagel had the best scoring chance late as he accelerated towards the Lethbridge cage on a rush play but Canes goaltender Logan Flodell made a great save to keep it scoreless after one.

The first goal of the game did not come until the 13:12 mark of the second period when forward Max Patterson gobbled up a rebound chance and smacked it home. It was 1-0 Broncos but the lead was short-lived as Zane Franklin knotted it up 1-1 on an exceptional passing play from the Hurricanes.

Directly after the goal, Canes’ defenceman Tate Olson received a roughing penalty and Swift Current made them pay as Estephan pocketed his ninth goal of the postseason to give the Broncos a 2-1 cushion just 27 seconds later and into the break.

New Jersey Devils prospect Colby Sissons has quietly put together a solid postseason and he continued to add stats as his slap shot from the left point beat Flodell short side to give Swift Current a 3-1 lead minutes into the third.

WHL playoff scoring leader Brad Morrison responded as he gathered a bouncing puck off an offensive zone faceoff in the Broncos end and quickly roofed one up and over Stuart Skinner to cut it 3-2.

At the 6:41 mark, Tyler Steenbergen forced a turnover in Canes territory, gathered the puck and zipped a low pass to Estephan who tucked it by the lower left pad of Flodell to restore Swift Current’s two goal margin at 4-2.

Lethbridge pulled Flodell during the final three minutes of regulation and got a goal from Egor Zudilov with 1:01 remaining on the clock. The goal from Zudilov came on a man advantage and was as close as the Hurricanes got. The final horn went and it was Swift Current that pulled away with a 4-3 victory to grab a 3-2 series lead in the WHL Eastern Conference Championship.

Shots on goal were 32-30 in favour of Swift Current. Both clubs netted one power play marker with Lethbridge going 1/3 and Swift Current finishing 1/4.

The Broncos have a chance to clinch the series and punch their ticket to the WHL Championship with a win in Lethbridge on Monday, April 30th. Game Six is slated for a 7:00pm start at the Enmax Centre.