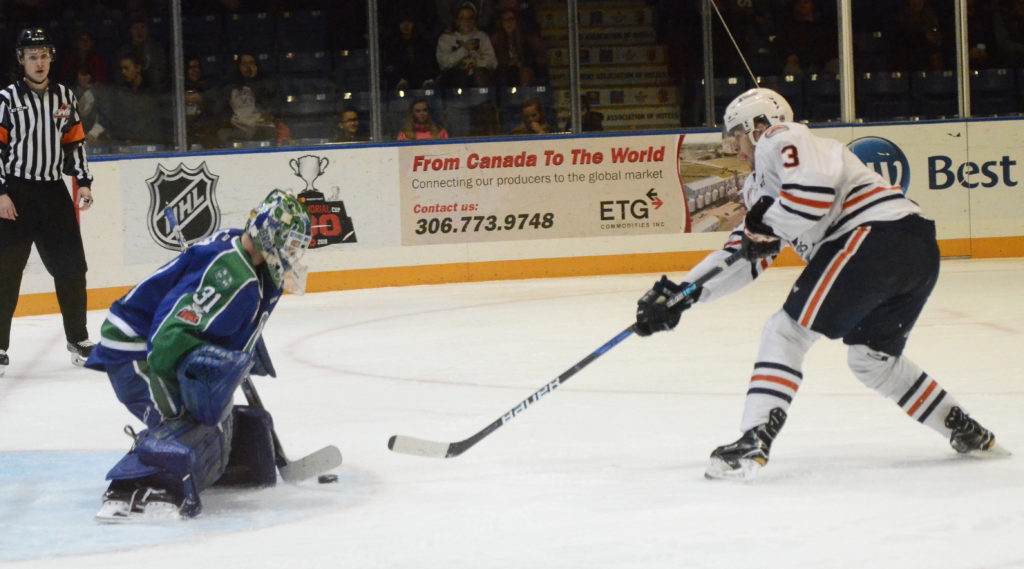 The Swift Current Broncos went into the Christmas break on a high note, edging the Kamloops Blazers by a score of 3-1 on home ice to earn their fifth consecutive victory.

The Broncos wasted no time in getting an early lead nice and fast. Forward Max Patterson dug the puck out of the corner in Blazers territory and zipped a pass to Artyom Minulin who then whipped one over to Glenn Gawdin to set up the captains 31st of the season 25 seconds into the frame.

Owen Blocker netted his first career WHL goal at the 11:01 mark of the first period to extend the Swift Current lead to 2-0. Linemate Logan Foster made a perfect little drop pass at the left faceoff mark and Blocker fired a perfect wrist shot by Blazers goaltender Dylan Ferguson.

Minulin displayed his physical edge, laying out Blazers Quinn Benjafield with a big open ice hit as the Broncos were showing their opposition that they are intent on winning their last home game before the mid-season break.

The Blazers did make it interesting as Brady Reagan’s point shot found its way through traffic to cut the Broncos lead to 2-1.

In the second period, Blazers’ blue liner Tylor Ludwar was awarded a penalty shot and he tried going five-hole on Broncos goaltender Logan Flodell but the 20-year-old goaltender read it perfectly and made the save.

Kamloops kept directing pucks to the net but Flodell came up with a couple big saves and it proved to be the difference in the third period. Matteo Gennaro would calmly send the puck down the ice from his own net into an empty Blazers cage with Ferguson pulled for the extra attacker.

Flodell maintained a high level of consistent play once again, topping out with 40 saves to earn his 21st victory of the season.

Shots on goal were 41-28 in favour of Kamloops. Both clubs combined to go 0/6 on the power play with the Blazers finishing 0/4.

Swift Current enters the break posting an impressive 25-7-2-0 record and will return to action on December 27th against the Moose Jaw Warriors for Crescent Point Minor Hockey Night at the Innovation Credit Union i-Plex.