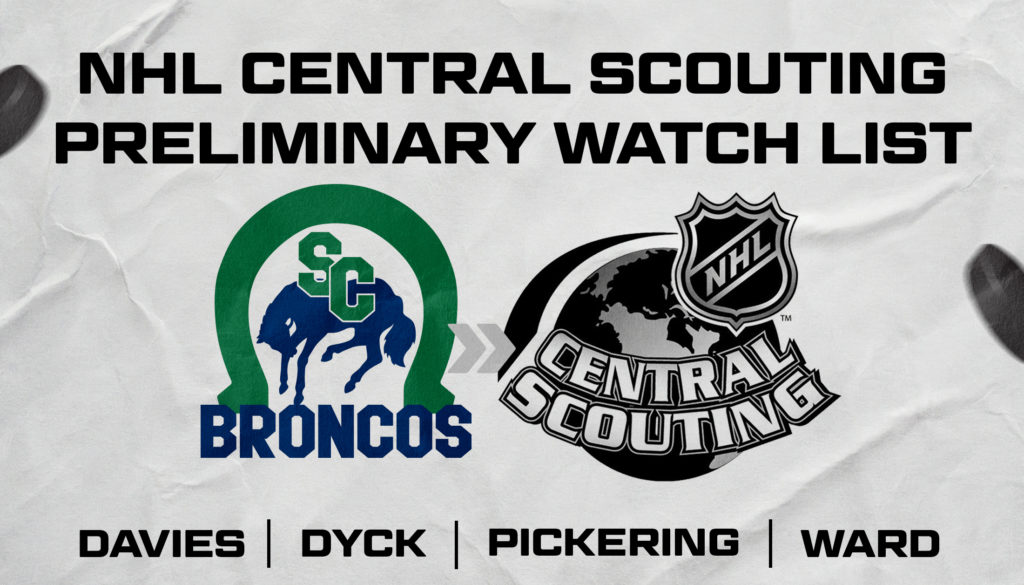 SWIFT CURRENT, Sask. – The Swift Current Broncos are proud to announce that four players on the roster have been recognized by NHL Central Scouting in their preliminary players to watch list for the 2022 NHL Entry Draft.

Forward Josh Davies was ranked as a ‘B’ prospect, while forward Mathew Ward, defenceman Owen Pickering and goaltender Reid Dyck were listed as ‘C’ prospects.

Davies, from Airdrie, Alta., is in his second season with the Broncos after being drafted 54th overall in the 2019 WHL Prospects Draft. Through seven games this season Davies has recorded a pair of goals.

In the 2020-21 Hub season, Davies scored six times and added three assists in 20 games. The 5’10, 195-pound Davies has been described as having a pro-level shot already, while adding high-end speed and deceptive physical attributes compared to his stature.

Ward, from Kamloops, B.C., is also in his second season with the Broncos and is currently the team’s leading scorer with three goals and two assists through seven games.

Drafted 14th overall in the 2019 WHL Prospects Draft, Ward joined the Broncos for the Hub season in the spring and adjusted to the WHL rather smoothly, finishing the season with six goals and 16 assists in 23 games. He was awarded with the Broncos rookie of the year team award at seasons end.

Ward has stepped into an even larger role this year with the graduation of some older players on the Broncos roster, while also averaging over 20 faceoffs taken per game. Generally a pass-first type of player, Ward has shown that he also possesses a high-end wrist shot which was on display with his goal in Winnipeg on Sunday, October 17.

Pickering, from St. Adolphe, Man., is patrolling the Broncos blue line in his second WHL season after being drafted 177th overall in the 2019 WHL Prospects Draft. Listed at 5’7’’ entering his draft year in 2018-19, Pickering now stands at nearly 6’4’’.

After sitting out the Broncos first game of the Hub season in the spring, Pickering made his WHL debut in the next game and didn’t come out of the lineup again, almost immediately being trusted in a top-four role.

A two-way defenceman with a strong active stick to negate scoring opportunities, Pickering also contributed offensively in the Hub season by scoring twice and adding seven assists in 23 games. He has recorded two assists in the 2021-22 season.

Dyck, from Winkler, Man., was the second goalie drafted in the 2019 WHL Prospects Draft, 45th overall by the Broncos. Already standing at nearly 6’4’’, Dyck had a stellar 2019-20 campaign at the U18 level by posting a 17-3-1 record with a 2.26 goals-against average and a .920 save percentage with the Pembina Valley Hawks. He took his play a step further in the playoffs, posting a 3-0 record with a miniscule 1.33 GAA and a .968 save percentage.

Joining the Broncos in the Regina Hub, Dyck appeared in eight games for the Broncos posting a 3-4-1 record with a 4.10 GAA and an .881 save percentage. His finest performance came April 17 against the Saskatoon Blades as he turned away 33 of 35 shots in regulation and all three attempts in the shootout in a 3-2 Broncos win.

In the summer of 2020, Dyck was invited to Hockey Canada’s U17 Virtual Summer Camp and their virtual Pursuit of Excellence goaltending camp. Dyck has started two games for Swift Current in 2021-22, posting a .901 save percentage and 4.01 GAA.

The 2022 NHL Entry Draft takes place July 7 and 8 at the Bell Centre in Montreal.