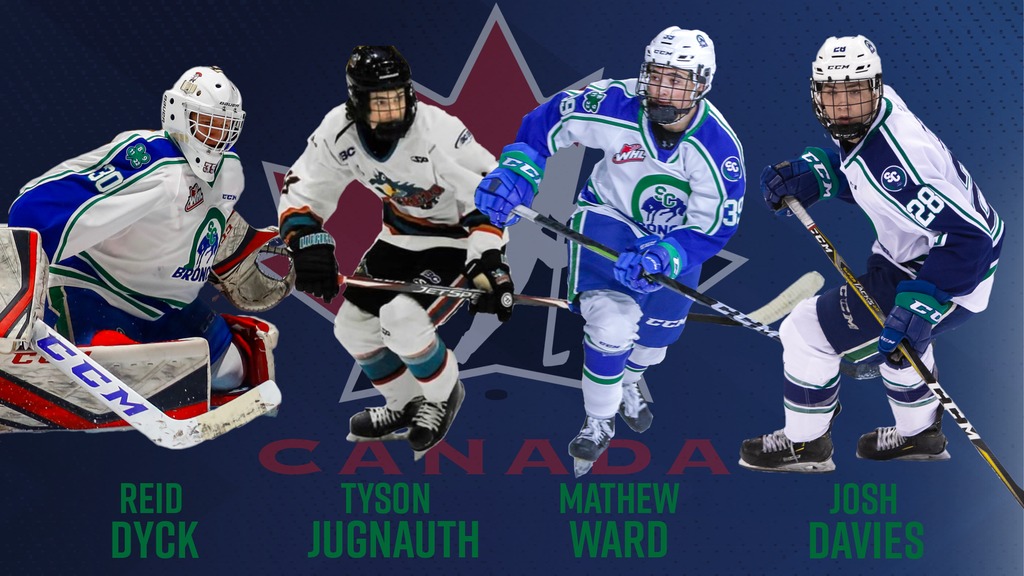 SWIFT CURRENT, SK – The Swift Current Broncos are proud to announce four prospects, Mathew Ward, Tyson Jugnauth, Reid Dyck and Josh Davies, have been invited to Team Canada’s virtual U-17 Development Camp which runs from July 19-25. The camp is a lead up to the World Under-17 Challenge which will take place in Charlottetown and Summerside, P.E.I., in November.

Ward, from Kamloops, B.C., spent the 2019-20 season with the West Van Academy Warriors of the Canadian Sport School Hockey League posting 19 goals and 45 assists in just 34 games. His 64 points were third amongst 2004-born players in the CSSHL Midget Prep division. He also made his WHL debut October 15 when the Broncos were in Kamloops. Ward was drafted 14th overall in the 2019 WHL Bantam Draft.

Jugnauth, from Kelowna, B.C., played for the Okanagan Rockets of the BC U18 League scoring five goals with 23 assists in 34 games. Jugnauth’s 28 points ranked fourth amongst 2004-born defenceman in the BC U18 League in 2019-20. At the prestigious Mac’s Tournament, Jugnauth scored twice in four games. He was drafted with the 21st overall pick in 2019.

Dyck, from Winkler, Man., was one of the top goaltenders in the Manitoba U18 AAA League in 2019-20 despite being just 15-years-old. On top of posting a 17-3-1 record, his .931 save percentage was second in the league and 2.26 goals against average was third. Before the playoffs were cancelled, Dyck went 3-0 with a 1.33 GAA and .968 save percentage. He was selected 45th overall in the 2019 WHL Bantam Draft and has signed a Standard Player Agreement.

Davies, from Airdrie, Alta., played on Vancouver Island for the Pacific Coast Hockey Academy Sea Devils in 2019-20, scoring 20 goals with 11 assists in 31 games. He made his WHL debut October 18 when Swift Current played in Victoria, and also suited up for two games following the Christmas break. He was drafted 54th overall in 2019.

The four are part of the 113 players named to the camp roster who will take part in the virtual camp, participating in a variety of sessions with a focus on player development through online education.

“The national under-17 development camp is the first stage in introducing these athletes to the Program of Excellence, and it is a great opportunity for them to develop as players and learn what it takes to wear the Maple Leaf,” said Scott Salmond, senior vice-president of national teams with Hockey Canada. “Our three under-17 teams are very fortunate to have these nine experienced coaches, and we know our coaching and support staffs will embrace the opportunity to guide the development of the top young players in Canada.”

WHL commits to 2020-21 season; start date to be decided upon government approval
1 week ago