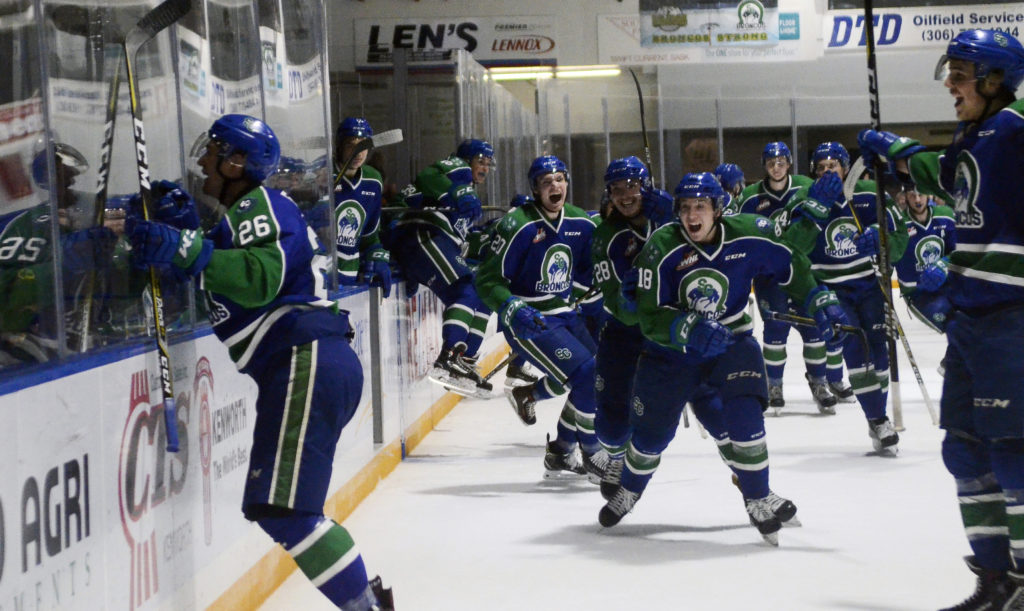 One night after an emotional 5-4 overtime win against the Lethbridge Hurricanes on Bronco Strong night, the Swift Current Broncos captured that momentum and turned it into another classic as they defeated the Edmonton Oil Kings 4-3 in overtime.

Broncos forward Ethan Regnier then buried his fourth of the season on an unassisted play to extend the Swift Current lead to 2-0.

The Oil Kings got one on the board with under three minutes left in the middle frame as forward Jalen Luypen scored his first goal of the season to cut into the Broncos lead and made it 2-1 Swift.

Yorkton, SK product Alec Zawatsky got the fans back on their feet as he restored the Broncos lead back to a two-goal margin, capping off a pretty passing play involving line mates Ben King and Patterson.

Back and forth the clubs went in the whirlwind second period as the Oil Kings’ Brett Kemp released one by Broncos goaltender Isaac Poulter with 34 seconds left before the intermission horn.

Swift Current nursed its one-goal advantage in the third period but it was short-lived as Matthew Robertson beat Poulter with a high wrist shot from the left faceoff dot, tying it 3-3. There was a lot of traffic in front of the Bronco cage but the goal stood.

Halfway through the third, Zawatsky appeared to score the go-ahead goal but after video review, it was revealed that his shot beat Myskiw but not the post. Edmonton pumped 21 shots compared to Swift Current’s two for the duration of the third period but the Broncos’ Poulter was locked in as he stopped 20 of those pucks to carry his team into overtime.

Poulter was named the game’s first star for putting up a sensational performance in the Bronco crease, backstopping 42 shots to earn his first career WHL victory.

Shots on goal were 45-20 in favour of Edmonton. Both clubs scored on their single power play chances.

For the first time this season, the Broncos have registered consecutive wins and have collected points in three straight games overall. The boys will return to game action on Friday, November 9th when they take on the East Division leading Prince Albert Raiders at the Art Hauser Centre. Puck drop is set for 7:00pm.