The Broncos are 3 points behind Saskatoon in the Eastern Wildcard standings for the 2nd playoff spot.

Kootenay is 5-16-2-0. They are last in the Central Division and East Conference. The Ice are nine points out of a Eastern Wildcard playoff spot.

Last Game: The Broncos fell to 0-5-0-0 on their US trip after a 4-1 loss Spokane. Calvin Spencer had the Bronco goal. The Broncos were without leading scorer Jon Martin, Jake Debrusk and played more than half the game without Glenn Gawdin who was injured early in the 2nd period. Martin, Gawdin and Debrusk are the Broncos’ top three scorers. Travis Child made 39 saves for the Broncos in goal.

The Ice are coming off a 2-1 overtime loss to the Moose Jaw Warriors last night in Cranbrook.

Numbers South of the Border: Tyler Steenbergen lead the Broncos in scoring during their US Division Trip. Steenbergen had a goal and 5 points in the five games. Glenn Gawdin and Jon Martin lead the team in goals during the trip with 3 each.

New Sheriff in Town: The Bronco players voted Jon Martin as the team captain for the 2015-16 seasons. Glenn Gawdin, Scott Feser and Jake Debrusk will serve as alternates. Martin was acquired early in October from the Kootenay Ice for a 4th round WHL Bantam Draft pick. Martin currently leads the WHL in goals with 22 and is 3rd in league scoring with 36 points.

Fun Fact: The last two Bronco team captains were former members of the Kootenay Ice organization. 2013-14 and 2014-15 captain Colby Cave was acquired from the Ice in the Cody Eakin trade while current captain Jon Martin came from the Ice this year. *excluding interim captains

Leaders: Jon Martin leads the team and The WHL in goals with 22. Martin is 3rd in the WHL in scoring with 36 points.

Glenn Gawdin is 2nd in team scoring with 23 points.

Jon Martin leads the team in power play goals with 3.

Kade Jensen leads the team in penalty minutes with 36.

Debrusk Out 1-2 weeks: Bronco forward Jake Debrusk sustained a lower body injury in a 3-1 loss to Victoria November 3rd. He was scheduled to play for Team WHL in the CHL Canada/Russia Series and was replaced by Dillon Dube of the Kelowna Rockets. He is out of the Bronco line-up for another 1-2 weeks.

Central Scouting with an Eye on Max: Max Lajoie has received an A level rating by NHL Central Scouting. Lajoie is a late birthday 1997 born player who is draft eligible in 2016.

Drafted Broncos: Glenn Gawdin was selected in the 4th round by the St. Louis Blues in 2015. Jake Debrusk was a 2015 first round pick of the Boston Bruins.

Who’s the Best? The WHL recently named its Top 125 players of all time. Fans can vote for their favorites. After fan voting, the greatest all time players in the WHL will be named this season. Former Broncos on the list are: Cody Eakin, Dan Lambert, Adam Lowry, Joe Sakic, Brian Sakic, Bryan Trottier and Tiger Williams.

The Roster: The Broncos have 24 players on their roster.

Imports are Andreas Schumacher from Sweden and Artyom Minulin from Russia.

Sick Bay: Jake Debrusk is out 1-2 weeks with a lower body injury. Jordan Harris and Jon Martin sustained upper-body injuries earlier this week in Seattle and have missed the last two games. Glenn Gawdin missed more than half of last night’s game in Spokane after an apparent injury. 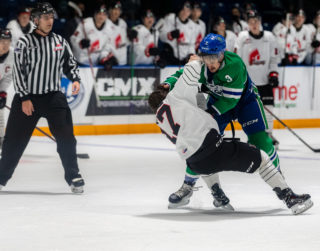 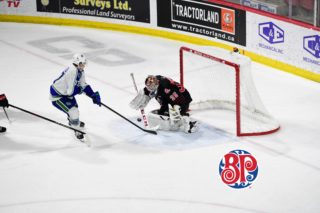 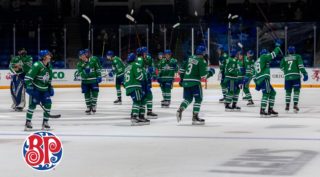