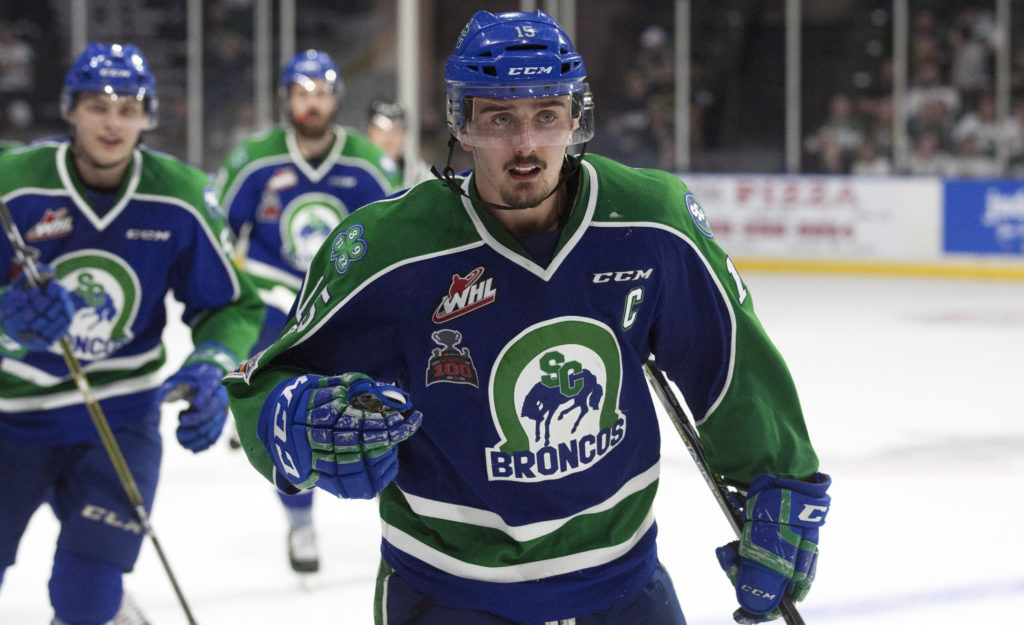 The 2018 Rogers WHL Championship shifted south of the border for Game Three between the Swift Current Broncos and the Everett Silvertips. It was an incredible outing for Broncos captain Glenn Gawdin as he notched his first career postseason hat trick as the Broncos came back to stun the Silvertips by a score of 3-2 to grab a 2-1 series lead in the Rogers WHL Championship Series.

Swift Current would score the first goal of the night at the 14:44 mark of the first period. Aleksi Heponiemi entered the zone with some speed, found some open ice in the slot area and dumped a soft drop pass to the stick of Gawdin who lasered it by Silvertips goaltender Carter Hart.

Everett responded with two goals that each came with a little bit of controversy. The first one coming a minute after Gawdin’s goal, Riley Sutter tipped in a Jake Christiansen point shot that had some air underneath it. The goal was reviewed to see if Sutter’s stick was over the crossbar at the time of the tip but it was deemed a legal goal.

Silvertips captain Matt Fonteyne gave Everett a 2-1 lead as a pass from Sean Richards went off him and in. Fonteyne was stationed in the Broncos crease and the play was briefly reviewed, but again it was ruled a good goal.

Shots on goal were 12 apiece through an entertaining 20 minutes of action.

Everett appeared to grow their lead to 3-1 but the goal from Bajkov was waved off due to the puck entering the goal through the side of the net. Big break for Swift Current as they killed off the rest of the penalty and returned to even strength only down a single goal.

The biggest scoring opportunity of the period came from the Tips’ Garrett Pilon but Broncos netminder Stuart Skinner had other ideas, making a speedy right to left push to make the save and deny Pilon.

Heading into the third period down 2-1, Swift Current’s Noah King received a two-minute minor for tripping but the penalty kill held off Everett’s man advantage. With eight minutes left on the clock, Washington Capitals prospect Beck Malenstyn got a burst of speed and created a quality scoring chance but his shot rang off the far post and into the corner.

The Broncos captain then scored quite possibly the biggest goal of his WHL career as he followed up his own shot on a shorthanded rush and snapped it over the glove hand of Tips’ goalie Carter Hart to tie it 2-2. Malenstyn and Artyom Minulin drew helpers on the goal that came with 3:17 left to go in regulation.

Overtime was necessary to determine a winner and the Broncos wasted no time as Gawdin took his magnificent performance one step further and buried the game winning goal 2:40 into the extra frame. For the Calgary Flames prospect, the goal capped off his first career postseason hat trick and furthermore, gave his club a 2-1 series lead in the WHL Championship.

Shots on goal were 38-30 in favour of Everett once the third period home sounded, indicating that overtime was needed for the second time this series.

The final shot tally was 39-32 for Everett with Skinner denying 37 of those for his 14th win of the 2018 Playoffs. The Broncos penalty kill was outstanding as they blanked the Silvertips on four power play chances while Swift Current was scoreless in their lone opportunity.

Game Four goes Wednesday, May 9th from the Angel of the Winds Arena in Everett. Puck drop is slated for 8:05pm MT.