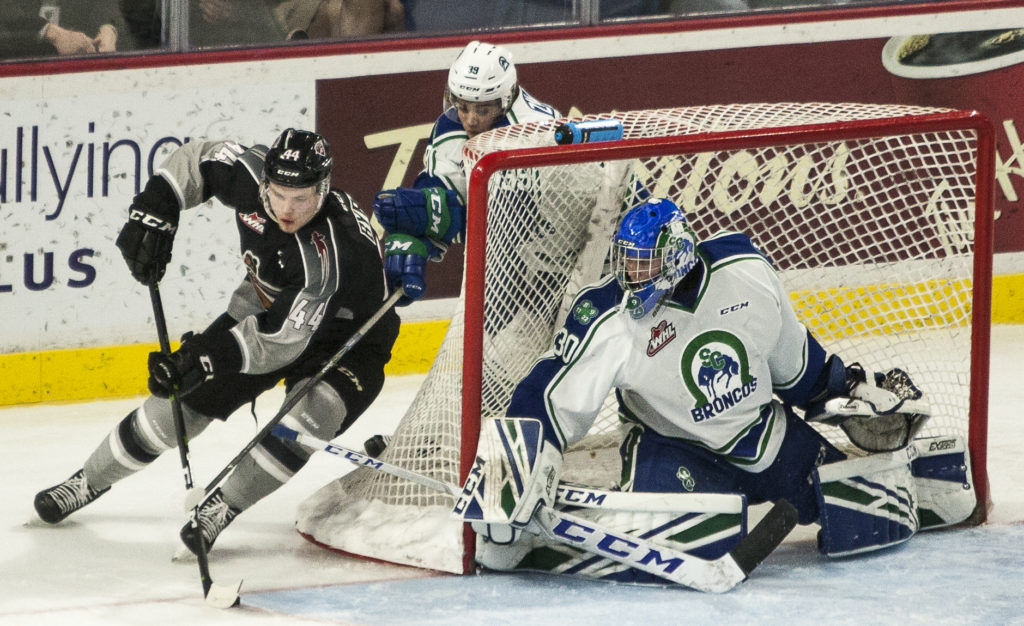 Fresh off an amazing 3-2 shootout victory over the Brandon Wheat Kings on Saturday night, the Swift Current Broncos kickstarted their B.C. road swing on Tuesday evening with a date against the Vancouver Giants. Broncos goaltender Joel Hofer exceeded his career high 53 save performance last Saturday with an incredible 65 save effort in a losing cause as Swift Current fell by a 6-2 margin.

Vancouver was buzzing throughout the opening frame as they outshot Swift Current by a wide 26-4 margin, scoring twice along the way. Giants defenceman Bowan Byram scored when Vancouver’s first power play was just about to expire exactly five minutes into the contest.

The Giants did increase their lead to 3-0 in the second period when Byram scored his second of the night via a wraparound but again Hofer was steady in collecting 19 additional saves.

Broncos forward Tanner Nagel put Swift Current on the board when he made an outstanding individual effort to earn his first goal of the 2018-19 season. The Mossbank, SK product went end-to-end and accomplished a nice drag move to beat Giants goaltender David Tendeck.

Down 3-1 after two in Vancouver. Still 20 minutes to go…and we already have a potential challenger for our next Bronco v Bronco. Sweet hands from Tanner Nagel. cc: @thewhl plays of the week crew. pic.twitter.com/SND1R0vK5Y

Shots were a commanding 46-11 in favour of Vancouver through 40 minutes with the score clock reading 3-1 Vancouver.

Hofer did everything he could to keep his team in it, notching his 50th save of the game but right after that the Giants got a two-on-one break and scored on it. Davis Koch had the puck, kept it and placed it under the bar and in to make it 4-1 Vancouver.

Swift Current was in penalty trouble in the third period which led to a five-on-three power play for Vancouver. Two goals were scored from Dylan Plouffe and Alex Kannok Leipert to place the Broncos behind 6-1.

A positive note for Swift Current was rookie forward Ben King scoring his first career WHL goal. The 16-year-old was stationed in front of the Giants crease and deflected a Christian Reimer point shot by Tendeck in the final minute of play.

Shots on goal were 71-16 for the Giants. Vancouver went 3/7 on the power play while Swift Current finished 0/2.

Swift Current will hop on the ferry towards Victoria to clash against the Royals on Wednesday night. Puck drop is set for 8:05pm MT.