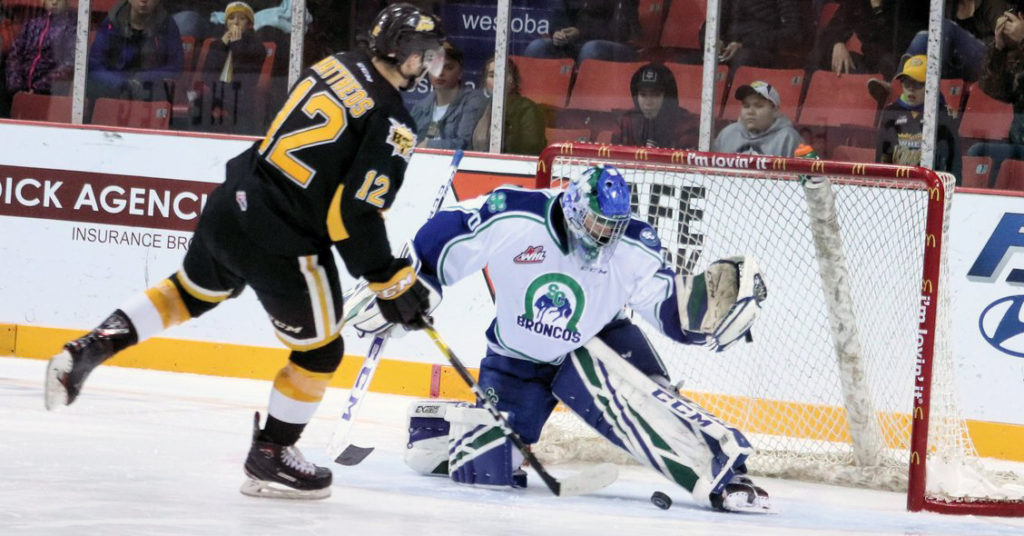 It may have taken 60 minutes of play, plus a five-minute overtime session and a shootout but the Swift Current Broncos secured their first victory of the season on Saturday night, edging the Brandon Wheat Kings 3-2.

The first period saw only one goal scored and that went to Wheat Kings captain Stelio Mattheos as he lifted one over the shoulder of Broncos netminder Joel Hofer during a delayed penalty call against Swift Current.

Halfway through the second, Swift Current caught a golden opportunity and made the most of it. Max Patterson tipped the puck ahead to Andrew Fyten while on stride, creating a 2-on-0 chance with himself along with Alec Zawatsky. The 20-year-old Fyten made a text book cross crease pass to Zawatsky who snapped it home to tie the game 1-1.

Penalty trouble hurt the Broncos as Mattheos fired a wrister by the blocker hand of Hofer on a Wheat Kings power play for his second of the game and restoring Brandon’s one goal lead at 2-1.

The 18-year-old Hofer was standing tall in the Bronco cage, polishing off 39 saves on 41 Brandon shots through 40 minutes to keep his squad in striking distance.

Swift Current struck back in the third period when forward Fyten tied the game up 2-2. The Sundre, AB product zoomed down the left wing and attempted a pass to Max Patterson but the puck ended up deflecting off the Wheat King defenders’ skate and up and over goaltender Ethan Kruger.

The score remained 2-2 through 60 minutes of regulation and overtime was needed. With that, the Broncos were guaranteed to pick up at least one point in the East Division standings. Swift Current was awarded a power play opportunity with 1:01 left in overtime and came close to ending it as Fyten hit the post on a low shot in the final seconds of the extra frame.

A shootout was then needed to determine a winner and the Broncos took care of business quickly as both Zawatsky and Patterson scored on terrific individual moves while Hofer stopped both Wheat Kings shooters to go along with his 53 save effort to help lock up a 3-2 win.

Shots on goal were 55-32 in favour of Brandon. Swift Current went 0/5 on the power play while Brandon finished the night 1/7.

For Swift Current, the win marks their first of the 2018-19 campaign and carry that momentum onto their B.C. road trip beginning on Tuesday, October 16th against the Vancouver Giants. Puck drop is set for 8:00pm MT.