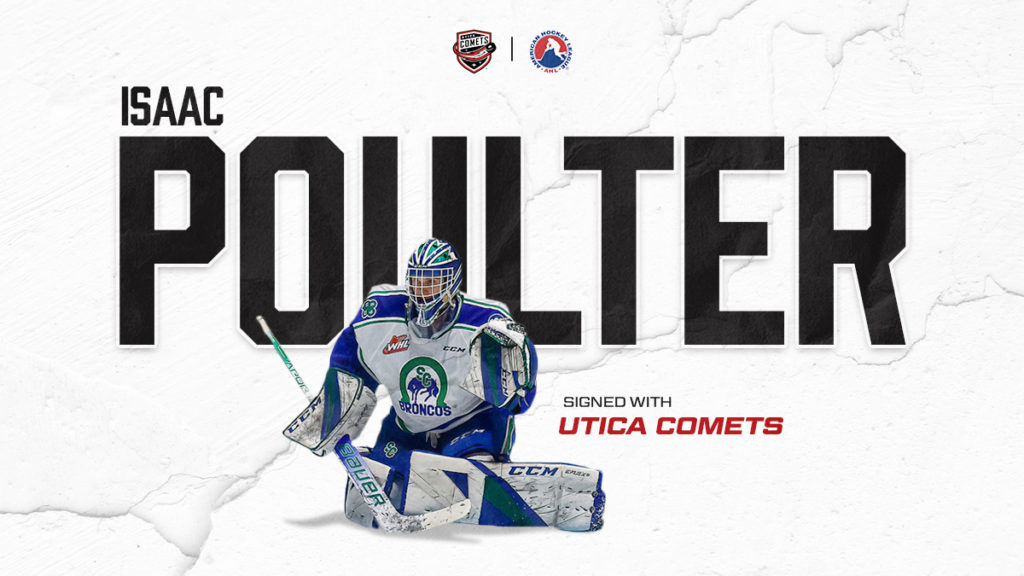 Swift Current, Sask. – The American Hockey League’s Utica Comets announced today that Broncos alum Isaac Poulter has signed a two-way standard player contract with the club for the 2022-23 season. The Comets are the AHL affiliate of the NHL’s New Jersey Devils.

Poulter, from Winnipeg, wrapped his Western Hockey League career this past season, spending four seasons with the Broncos after being drafted by the club in the sixth round, 112th overall, in the 2016 WHL Prospects Draft.

Spending four years with the team, Poulter finished near the top of the leaderboard in multiple categories in the Broncos record book. Those included: career games by a goaltender (137, T-4th), career minutes played (7,976, 3rd), career saves (4,411, 2nd) and single season shutouts (5, T-3rd). For the third straight season, Poulter was named the Broncos team MVP in 2021-22.

After eight seasons as the AHL affiliate for the Vancouver Canucks, the Utica Comets became New Jersey’s top affiliate with Vancouver relocating their AHL team to Abbotsford, B.C. The Comets had their best season in franchise history in 2021-22, finishing with a 43-20-9 record to claim top spot in the North Division.

The Broncos would like to congratulate Poulter and wish him luck as he makes his professional debut.