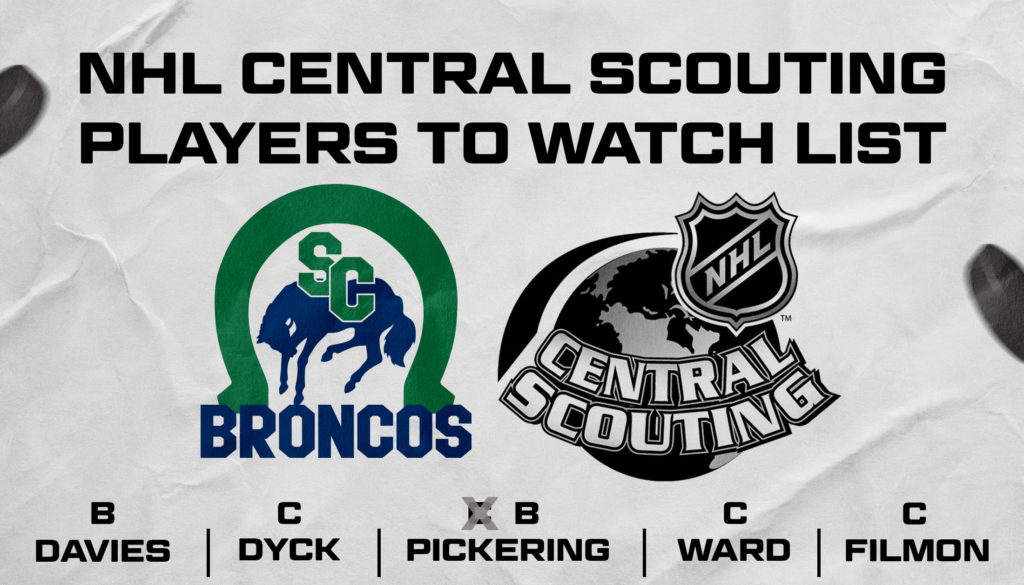 SWIFT CURRENT, Sask. – The Swift Current Broncos are pleased to announce that 2004-born forward Josh Filmon has been named on the NHL Central Scouting’s most recent “Players to watch” list for the 2022 NHL Entry Draft.

Filmon, from Winnipeg, has been named a C-ranked skater, a player potentially drafted in the fourth, fifth or sixth round. Filmon joins teammates Reid Dyck and Mathew Ward who are also C-ranked skaters.

In his second season with the Broncos Filmon has already quintupled his offensive output from the 2020-21 Hub season by scoring six goals and adding four assists in 17 games. He is currently riding a four-game point streak.

Also in his second season with the Broncos, Pickering has seen his role increase dramatically while being used in all situations through 17 games. He has already set a career high with three goals this year while also adding three assists for six points. All six of his points have come on the power play.

Davies, from Aidrie, Alta., has four goals in 14 games this season and has continued his punishing physical play, using all of his 5’10’’, 195-pound frame to rattle the boards in various WHL buildings.

Ward, from Kamloops, B.C., leads the Broncos in scoring with 19 points in 16 games so far this season. He has now played 40 games in his short WHL career with 41 points to his name.

All five Broncos players are in action on home ice this weekend as they welcome the Winnipeg ICE on Friday and the Saskatoon Blades on Saturday.

The full list can be viewed by clicking here.