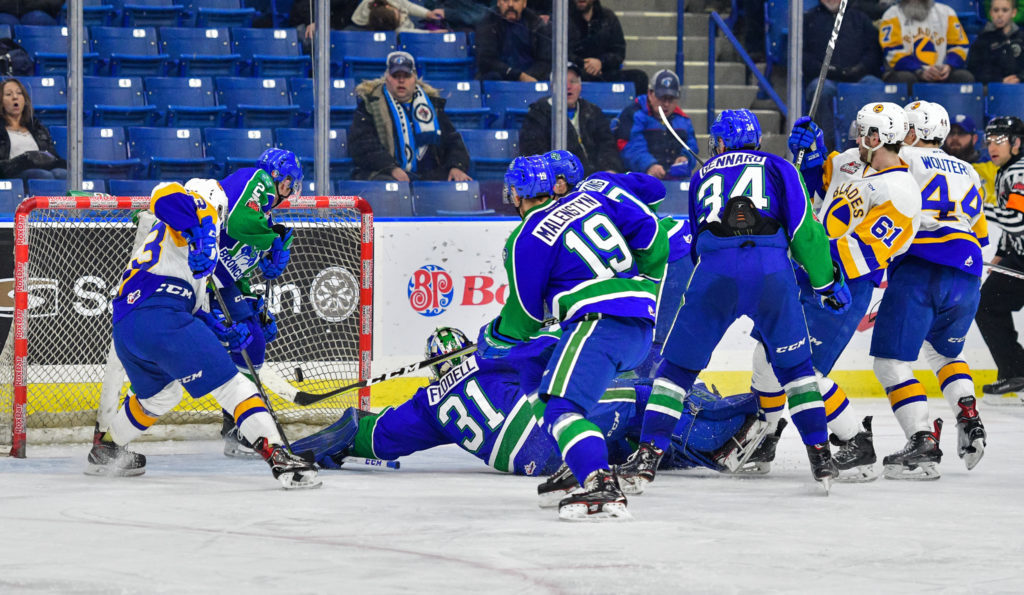 Swift Current rang in the New Year with a quick day trip up north to face the Saskatoon Blades for the back half of a home-and-home set at the SaskTel Centre. After dropping a 4-3 decision on December 30th on home ice, the Broncos funk continued as they lost 4-2 in regulation on Monday afternoon.

Dryden Michaud one-timed a pass from Tyler Lees to give Saskatoon a 1-0 lead midway through the first period.

The Broncos got one back thanks to a terrific indivual play from Broncos forward Ethan Regnier. The rookie forced a turnover in Saskatoon territory and then rifled a good low wrist shot off the far post and in to force a 1-1 score after 20 minutes of play.

The Blades’ Evan Fiala capped off a partial two-on-one break to make the score 2-1 Saskatoon at the 7:49 mark in the middle frame.

But once again, the Broncos responded in no time as vetern winger Kole Gable zoomed down the left wing, kept the puck and wired a wrist shot just by the Blades defenceman and netminder Nolan Maier.

Swift Current found themselves in penalty trouble in the third period and it proved to be devastating as Josh Paterson victimized the Broncos again, tapping in a bouncing puck from a scramble in the Broncos crease to make it 3-2.

Paterson’s goal ended up being the game winner as Braylon Shmyr tacked on an empty netter when the Broncos went with a six-on-five attack pressing to tie it up.

Shots on goal were 42-22 in favour of Saskatoon. Swift Current went 0/3 on the power play while Saskatoon clicked for a single power play goal on four tries.

The Broncos return home to faceoff against the Kootenay ICE on Wednesday, January 3rd at the Innovation Credit Union I-Plex. Puck drop is at 7:00pm CT.