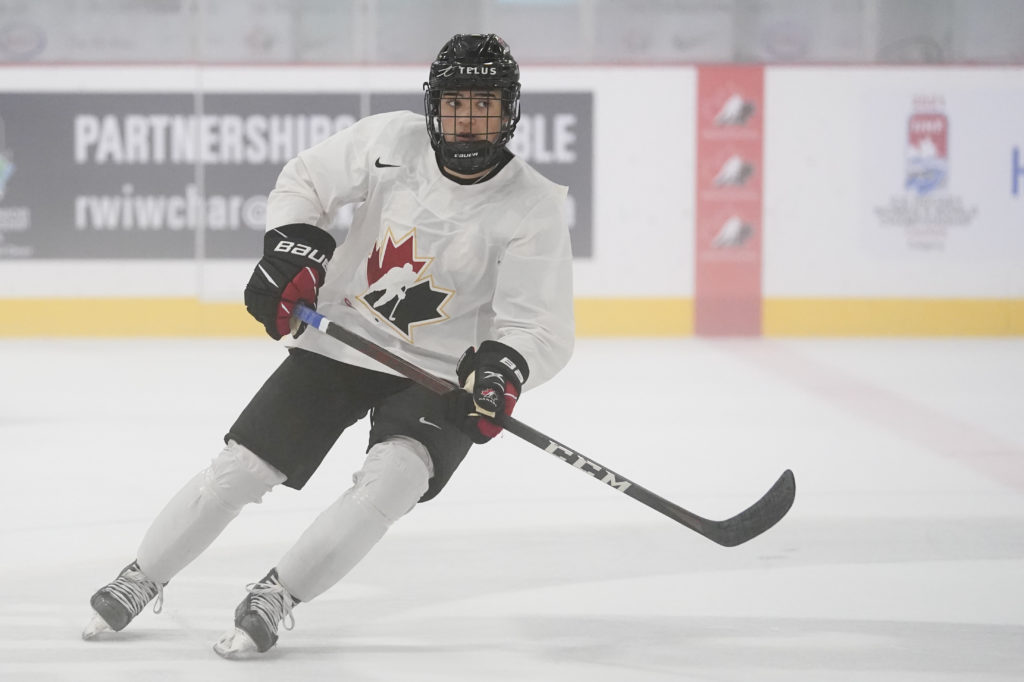 There’s no doubt an unexpected phone call was one of the highlights of Mathew Ward’s summer. Shortly after returning home following a workout in his hometown of Kamloops, B.C., Ward’s phone lit up with a number he didn’t recognize.

“It was early in [July] when a representative from Hockey Canada called me,” Ward recalled. “Honestly I didn’t really know what was going on, because I didn’t know there was a camp happening. Right away I knew I had to get dialled in to get ready for camp because it was happening in just a few weeks.”

Ramping up his workout routine in the weeks leading up to the camp, Ward made his way to Calgary for July 25, with the camp being held at the Seven Chiefs Sportsplex on the Tsuut’ina Nation nearby.

With Covid protocols still in place, Ward likened the experience to that of the Hub season in Regina.

“It was pretty similar to the bubble in Regina,” he said. “You’d have your ice time and eat your food, then you’d head back to your room. You weren’t supposed to leave your room very often, and you had to wear your mask everywhere outside of your room.”

Unlike the bubble, however, Ward had a roommate to go through the experience with throughout the entire camp, sharing a hotel room with Antonin Verrault of the Quebec Major Junior League’s Gatineau Olympiques.

Following day one of the camp, which included photos and one-on-one meetings with the coaches, the players hit the ice for their on-ice sessions the following day.

With all the best players in the 2004 age group across Canada, it’s not surprising the pace was high.

The players aren’t just put through the paces on the ice throughout the camp. Ward said there were presentations on the importance of mental performance and sleep.

There were also mixed practices and intrasquad games with the U-20 players.

“It was really cool,” Ward said. “The first day we changed up to our new teams, I’m in a room sitting right next to Cole Perfetti. It was pretty cool to be sharing a room with a bunch of first-round draft picks and guys who are making a million dollars.”

Perfetti was drafted 10th overall by the Winnipeg Jets in the 2020 NHL Entry Draft, and scored 26 points in 32 American Hockey League games with the Manitoba Moose during the 2020-21 season.

Ward feels the experience of being at the camp will have a lasting impact on his game.

“I learned a lot,” he said. “It just gives me confidence to be able to play with these guys and not feel like you’re out of place. Knowing you’re that close to where they are right now, it definitely motivates you. It’s cool to see where the OHL and QMJHL guys stack up against the Western League guys too.”

With the camp coming to an end on August 4, Ward’s attention is now solely focused on heading to Swift Current for the 2021-22 season.

“It’s hard to explain the excitement I have right now,” he said. “I’m just looking forward to seeing all the boys again. It’s no secret that we’re going to try and make the playoffs. It’s going to take everyone to buy in to make that happen.”

On the personal side of the upcoming season, Ward is also eligible for the 2022 NHL Entry Draft.

“I’d be lying if I said I wasn’t thinking about it,” he admitted. “Every draft-eligible kid in the world is thinking about it. You just can’t let it be a distraction, but at the same time you have to know that people are watching and not let it interfere with your team play.”