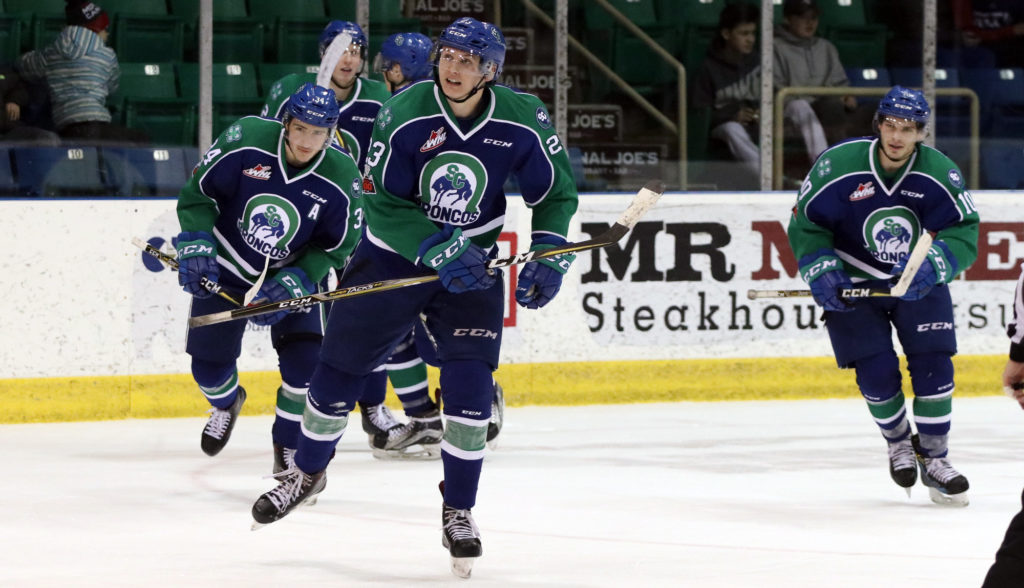 Goals continue to come in piles as the Swift Current Broncos netted half a dozen to stave off a pesky Prince Albert Raiders squad, coming away victorious 6-5 for their fourth straight win.

Broncos forward Andrew Fyten opened the scoring as he capitalized on a gift wrapped opportunity. Beck Malenstyn was initially denied from the Raiders’ Ian Scott from in close but the puck ended up in the slot area and Fyten stepped into a good wrist shot, sending it to the open net to make it 1-0 Swift Current.

The Raiders Nikita Krivokrasov picked up a rebound opportunity, did a quick move to the slot and scored Prince Albert’s first goal at the 7:33 mark.

Fyten found himself in the right place, right time once again as the 19-year-old was stationed on the door step by the Raiders net and banged home a rebound to put Swift back ahead 2-1. Malenstyn attempted a wrap around scoring chance with Scott stopping the shot but Fyten finished off the play.

Jordy Stallard deposited his 37th goal of the year on a Prince Albert man advantage with 38 seconds left in the period. The score was 2-2 through one period of play.

Kody McDonald gave the Raiders a brief lead as he deflected a Curtis Miske pass by Stuart Skinner early in the second. The puck went off the skate of McDonald and whether if it was accidental or not, the goal was deemed legal.

Swift Current would get it back as team captain Glenn Gawdin capped off a nice passing play that involved teammates Max Patterson and Tyler Steenbergen. For Gawdin, the goal marked his 48th of the season and his point streak extended to 16 games.

Broncos blue liner Josh Anderson clapped an absolute one-timer from the left point through a maze of legs to give Swift Current a 4-3 lead midway through the middle frame. Gawdin collected the lone assist on the goal.

Steenbergen then joined the party, zipping his 39th of the season through the five-hole of Scott, effectively ending his night. The Raiders backup goaltender Curtis Meger entered the game in relief.

In the third period, McDonald scored his second goal of the game to get the Raiders within one. McDonald tried to float a pass over from the corner in Broncos territory and it took a weird bounce off Skinner’s equipment, just sneaking over the goal line in a tough luck play.

The Broncos got caught on their heels in the back half of the third period, leading to a goal from Cole Fonstad with under seven minutes left in regulation, tying the affair up 5-5.

Patterson made sure no overtime was necessary as he picked the corner from the left faceoff dot with 4:02 left in regulation. Matteo Gennaro earned an assist on what stood as the difference maker in a 6-5 Broncos victory.

29-28 were the shots on goal for Swift Current. The Broncos went 1/5 on the power play while the Raiders scored twice on three separate man advantages.

With the win, Swift Current improves its stellar record to 40-13-3-1, surpassing last season’s win total of 39 and remain second place in the WHL’s East Division standings.

Swift Current returns home for a mini two-game home stand, the first of which is against the Brandon Wheat Kings on Wednesday, February 14th. Puck drop is slated for 7:00pm CT.