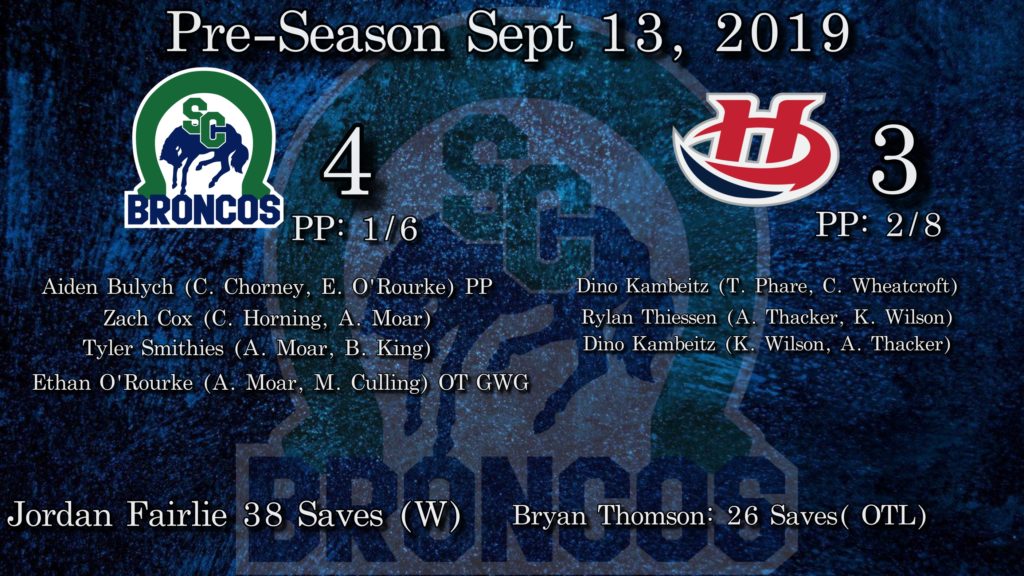 LETHBRIDGE, AB – The Swift Current Broncos improved to 4-0-0-1 in the pre-season after a 4-3 overtime win in Lethbridge against the Hurricanes Friday night.

Aiden Bulych opened up the scoring on the power play, jumping on a loose puck in the crease after Carter Chorney was stopped in tight by Bryan Thompson.

Zach Cox extended the Broncos lead to 2-0 after taking a bullet pass from Connor Horning, skating in on a breakaway and beating Thomson over the glove to give the Broncos a 2-0 lead through 20 minutes.

Lethbridge answered back in the second as Dino Kambeitz capitalized on his second opportunity off the rush to cut the Broncos lead to 2-1.

Tyler Smithies would restore the Broncos lead late in the period, finding a loose puck and backhanding it past Thomson just as a power play had come to an end. Swift Current lead 3-1 through two periods, but trailed 28-16 on the shot clock.

Swift Current ran into penalty trouble in the third, giving up back to back power-play goals to Rylan Thiessen and Kambeitz just four minutes apart.

The Broncos took four penalties in the third period, but survived the final two as the game went to overtime. It was the third overtime game for the Broncos through five pre-season games.

In the extra frame, Ethan O’Rourke took a pass from Alex Moar who was below the goal line, and O’Rourke was able to walk down the slot before firing a wrist shot under the glove of Thomson to seal the victory for the Broncos.

Swift Current now returns home to wrap up their pre-season schedule when they host those same Hurricanes at the Innovation Credit Union iPlex at 7:00 on Saturday.