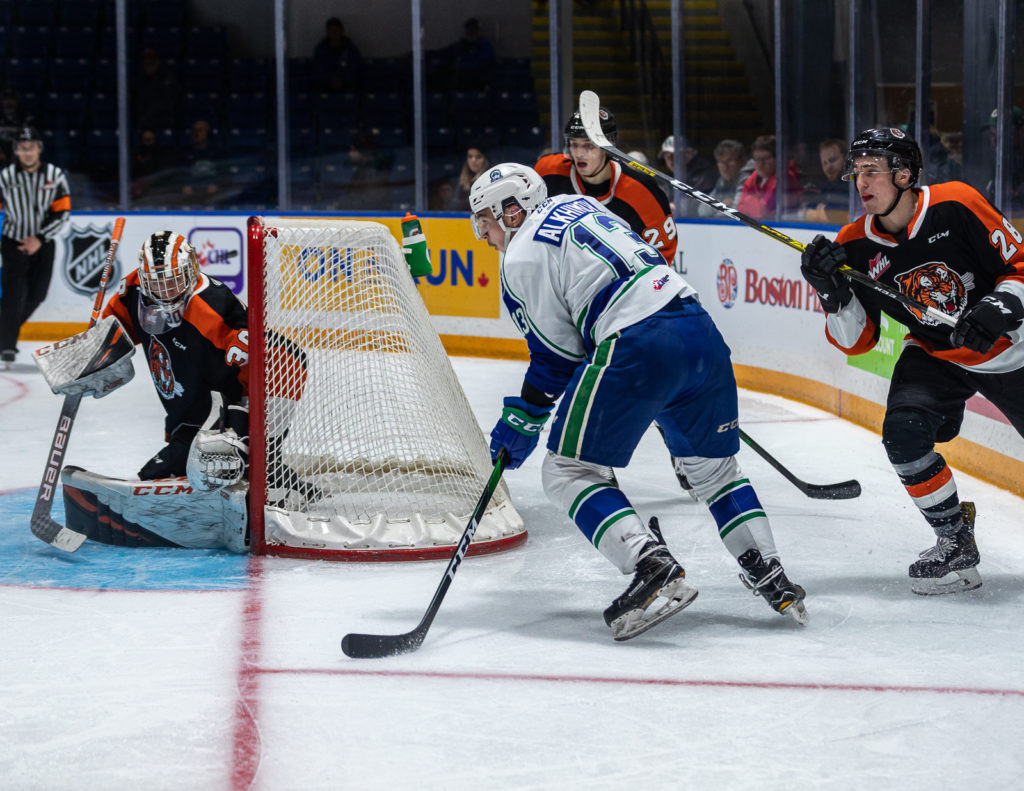 SWIFT CURRENT, SK – The Swift Current Broncos (10-31-1-3) took care of business Saturday night, rebounding from a tough loss at home to the Moose Jaw Warriors with a 6-3 win at Mosaic Place over those same Warriors. Tuesday they begin a tough week at the Canalta Centre in Medicine Hat as they play the Tigers (30-14-1-1) twice and the Prince Albert Raiders on Saturday.

Jaxan Kaluski’s second career Western Hockey League hat trick led the way for the Broncos on Saturday. The first two of his goals came in the opening 10 minutes of the period before D-Jay Jerome hit the highlight reel with his goal to give the Broncos a 3-0 lead through one.

The score was a touch closer at 3-1 through two as Martin Lang got the Warriors on the board late in the second period with a shot that deflected off a skate and in. Early in period three, Isaac Poulter made a sprawling stop on a two-on-one rush to keep the Broncos ahead by two.

Eric Houk scored a shorthanded goal by poking the puck away from Logan Doust and sliding a breakaway through the five hole of Boston Bilous before Moose Jaw answered back 18 seconds later to make it 4-2.

Sergei Alkhimov made it 5-2 before Kaluski completed the hat trick by tipping in a point shot to push the Broncos power play to 3/5 on the night. Ryder Korczak scored his second of the game in the final minute for the 6-3 final score.

The Tigers played a pair of tight games on the road over the weekend, dropping a 6-5 decision in Saskatoon Friday night before taking a 4-3 shootout win in Prince Albert on Saturday.

Friday the Tigers jumped out to a 3-0 lead 11:37 into the second before the Blades scored five straight to lead 5-3 early in the third. The teams then traded goals with Nick McCarry’s tally pulling the Tigers to within one with five minutes to go, but that was as close as they would get in the loss.

Saturday Medicine Hat led 3-2 in the back half of the third period before Kaiden Guhle’s goal tied it with 6:34 to go, sending the game to overtime and eventually a shootout. Brett Kemp sealed the victory with a goal in the third round to get the Tigers the two points.

Tuesday will be the fourth of eight meetings in the season series between the Broncos and Tigers, with Medicine Hat holding a 2-0-0-1 advantage.

September 27 and 28 the Tigers won 2-0 and 10-1 to sweep a weekend set, before the Broncos picked up a 4-3 shootout win December 27, snapping a nine-game losing streak at the time.

With a victory, the Broncos would match their win total from last season.