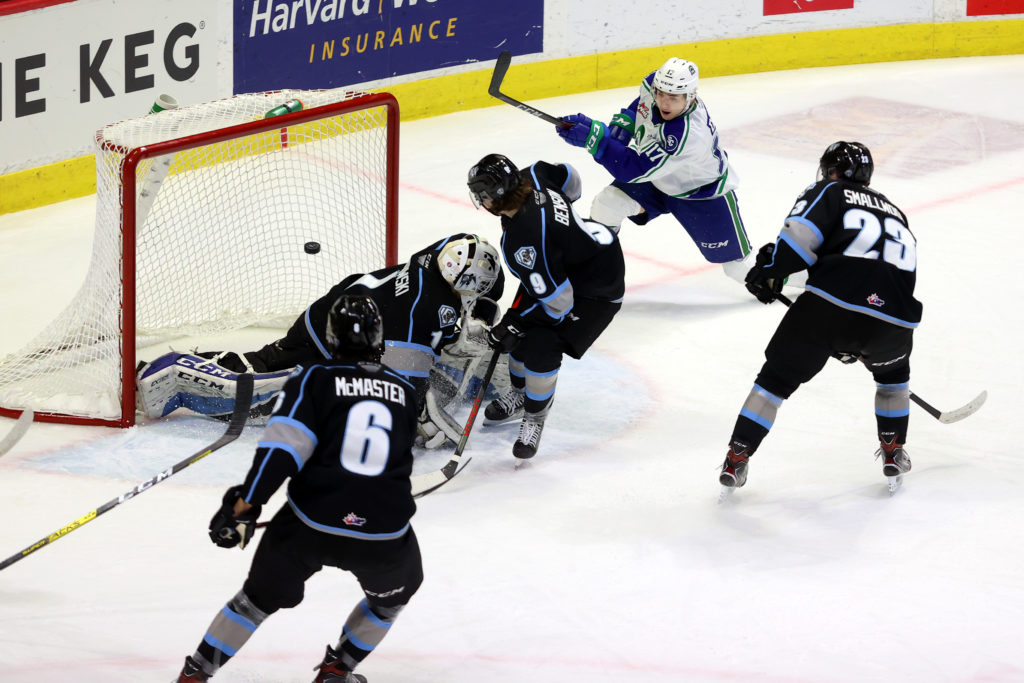 Regina, Sask. – The Swift Current Broncos (3-13-1-0) were shutout for the first time this season at the hands of the Saskatoon Blades Wednesday night. They now look to end a six-game losing streak when they face the Winnipeg ICE (12-5-0-0) on Friday, who just had a six-game winning streak snapped.

Wednesday the game opened at a furious pace with only a handful of whistles in the first six minutes. The Broncos and Blades traded chances before Saskatoon opened the scoring.

Blake Stevenson took a backdoor feed and tapped the puck into an open net for his sixth of the season 10:35 into the first, before scoring on a near-identical feed less than two minutes later to make it 2-0 after 20 minutes.

After a strong start to the second period for the Broncos, the Blades countered to extend their lead on a fortuitous bounce. Ben Saunderson’s shot from the left point missed the net, but careened off the end boards to the slot for Chase Wouters to score his seventh of the season.

While the Broncos had a number of good scoring opportunities throughout the game, they couldn’t sneak a puck past Nolan Maier to turned aside 27 shots for his second shutout of the season. Isaac Poulter was stellar at the other end of the rink, turning aside 37 of 40 Saskatoon Blade shots.

The ICE were also in action on Wednesday, hoping to push their winning streak to seven games. The Brandon Wheat Kings had other plans, handing Winnipeg their first loss since March 31 with a 5-3 victory.

After Brandon jumped out to a two-goal lead halfway through the first, the two teams traded goals the rest of the way with Winnipeg picking up a pair of power-play goals.

Friday is the third of four meetings between Swift Current and Winnipeg with each team picking up a victory. The ICE won 6-4 March 15 after opening up a 5-1 lead late in the second period. The Broncos punched back with goals from Eric Houk, Cole Nagy and Aiden Bulych to get to within one, but the ICE held off the comeback and scored on the power play with 12 seconds left to win.

March 26 the Broncos jumped out of the gate with a 3-0 lead after 20 minutes. Winnipeg made things interesting by scoring early in the third to make it a one-goal game, but the Broncos didn’t cave, scoring the next three en route to the 7-4 win. Mathew Ward led the way offensively with a four-assist game.

Friday’s game is a 6:00 puck drop, catch the action on watch.chl.tv or tune in to Living Sky Casino Broncos Hockey on The Eagle 94.1. The pre-game show starts at 5:30.