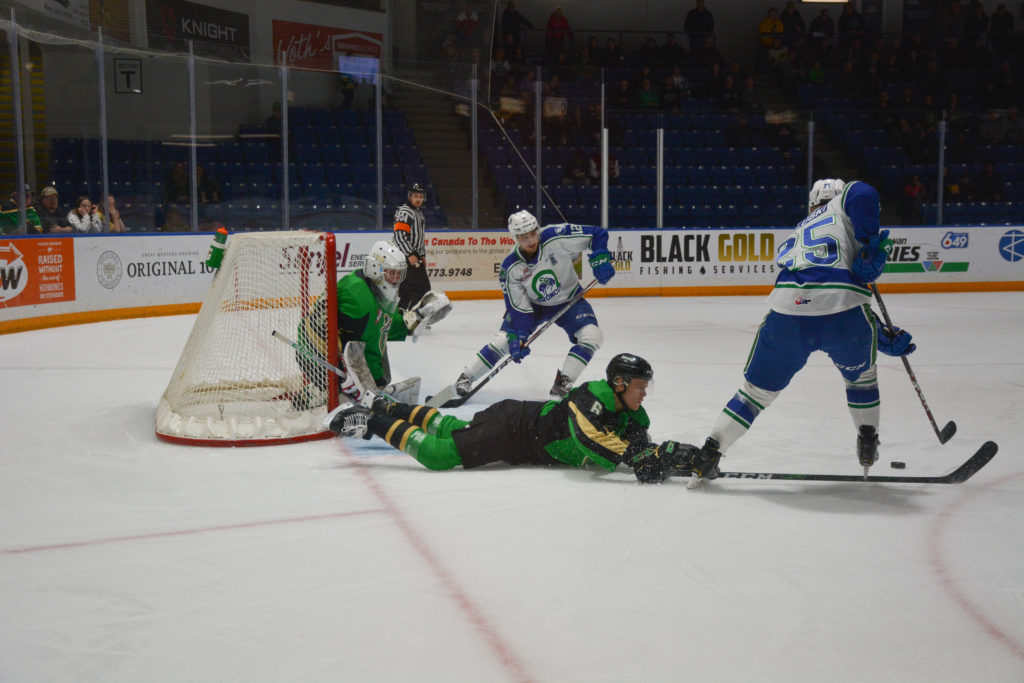 SWIFT CURRENT, SK – The Swift Current Broncos (10-37-1-3) started strong but couldn’t sustain it in an 8-3 loss to the Winnipeg ICE Wednesday night, their sixth loss in a row. Friday they’ll travel north to face the Prince Albert Raiders (28-16-5-4) for the fourth and final time this season, hoping to avoid the season-series sweep.

The Broncos were the much better team for the opening 10 to 12 minutes Wednesday, at one point outshooting Winnipeg 6-1. The ICE weathered the early storm and opened the scoring 14:04 into the period.

The Broncos pushed back and tied the game off a strong forecheck from Hayden Ostir, setting up Jaxan Kaluski in front with goaltender Liam Hughes out of position, but Winnipeg regained the lead off a two-on-one rush to carry a 2-1 lead into the intermission.

Winnipeg scored just 1:43 into the second period and would add two more to lead 5-1 with under eight minutes remaining. Swift Current found their legs and tried to turn the tide, scoring twice in 1:21 with Matthew Benson’s fifth and Ostir’s sixth to cut Winnipeg’s lead to 5-3 heading into the third.

The ICE would once again pull away, scoring three unanswered goals in the third to take the game 8-3.

The Raiders have been off since Saturday when they wrapped up a short two-game road trip through the Central Division, dropping both games. They fell 2-1 in Calgary Friday before a 3-1 setback in Lethbridge the next night.

Raiders goaltender Max Paddock was named the games third star that night, turning aside 34 of 36 shots. It was Paddock’s 10th game with Prince Albert and he’s posted a solid 6-2-0-2 record with a sparkling .940 save percentage and 1.67 goals against average.