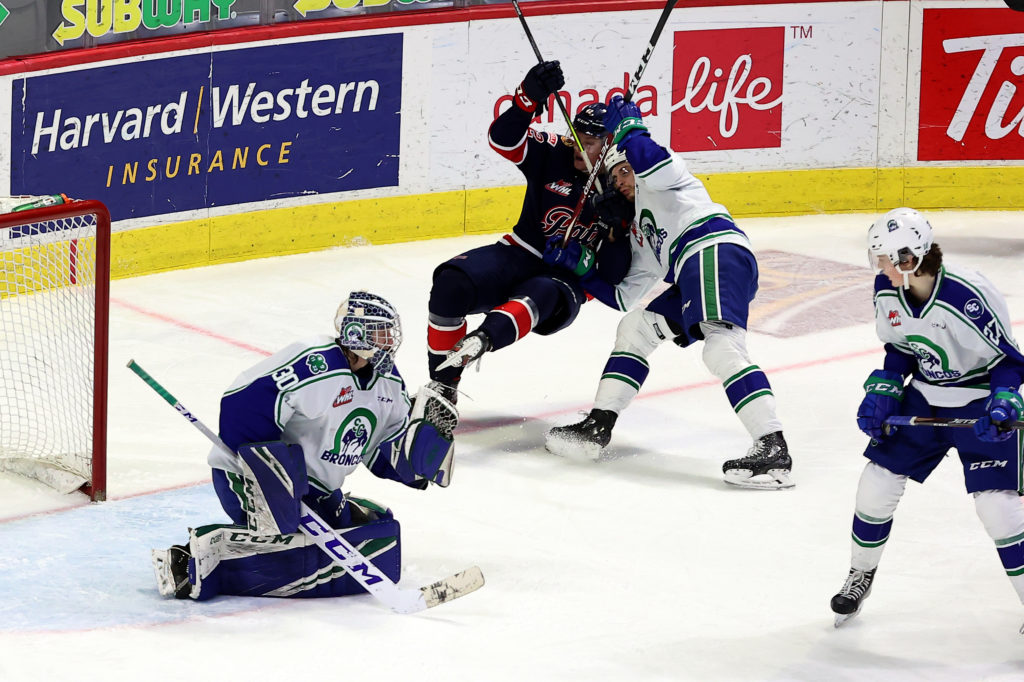 Regina, Sask. – The Swift Current Broncos (4-16-1-0) are hoping to avoid being swept by their long-time rival Regina Pats (8-9-2-1) Thursday night when they meet for the fourth and final time this season.

The Broncos are coming off a 6-1 loss to the Brandon Wheat Kings on Wednesday. The game remained close until the final minutes of the second period when Brandon scored twice in 1:31 to take a 4-1 lead into the intermission. The Broncos only recorded two shots on net in the final 20 minutes. Mathew Ward scored the lone goal for the Broncos in the loss.

Swift Current has registered just 18 shots on net in each of their previous two games, and are hoping a meeting with the Pats will turn that around as Regina has given up the third-most shots in the WHL this season, ahead of only Moose Jaw and Swift Current.

Regina comes into Thursday’s game on the heels of a two-game winning streak. Sunday a very physical and chippy affair saw the Pats down the Prince Albert Raiders 4-3, before a 4-2 win over the Saskatoon Blades on Tuesday. Carson Denomie scored the go-ahead goal late in the second period and Saskatoon had just five shots on net in the final 20 minutes before Regina hit the empty net.

The back-to-back wins for Regina come after three straight losses following the departure of Connor Bedard to the U-18 Championships in Texas. Despite missing the past five games for Regina, Bedard still leads the team in scoring by four and is third overall in league scoring with 28 points.

Thursday is the fourth and final meeting of the season with the Pats for Swift Current, with Regina looking for the season series sweep. After a down-to-the-wire 3-2 loss in the first meeting of the year, the past two haven’t been as kind to the Broncos with 9-4 and 6-1 losses.

Tonight’s game also finishes off a five-games-in-seven-days stretch for Swift Current, who have just two games remaining on the schedule following tonight; Sunday at 4:00 against Moose Jaw before the season finale on Wednesday at 8:00 against Prince Albert.

Catch the action on watch.chl.tv or tune in to Living Sky Casino Broncos Hockey on The Eagle 94.1 with the pre-game show beginning at 7:30.