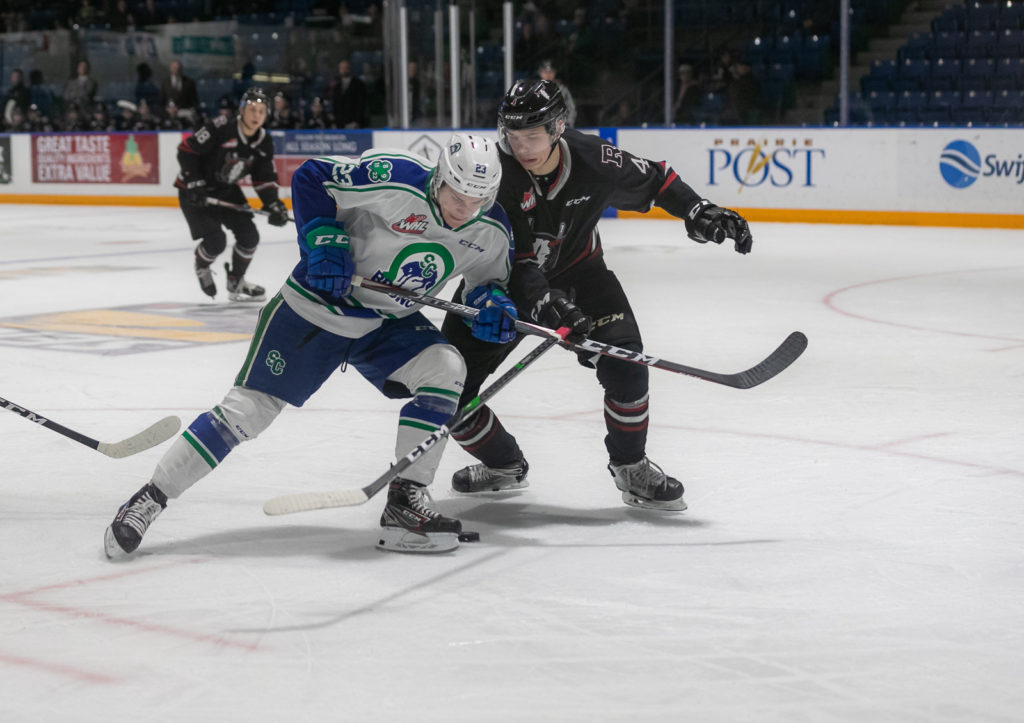 Swift Current, Sask. – The Swift Current Broncos (2-0-0-0) swept the Medicine Hat Tigers to open up the 2021-22 regular season and now look to keep the momentum rolling as they welcome the Red Deer Rebels (1-1-0-0) to the Innovation Credit Union iPlex on Tuesday night. The Rebels were the Broncos last opponent in 2019-20 before they went nearly 600 days between regular season home games.

Saturday night in Medicine Hat the Broncos jumped out to a 3-0 lead after the first period thanks to goals from Caleb Wyrostok, Josh Filmon and Raphael Pelletier, with the final goal coming with just 19 seconds left in the period. The shots read 11-8 in favour of the Tigers after one.

Despite numerous high-quality scoring opportunities for Swift Current in the middle frame, including partial breaks and odd-man rushes, the score remained 3-0 heading into the third period.

As expected, the Tigers began to furiously push in an effort to cut into the Broncos lead as the third period went on. Shortly over the halfway mark of the third, Lukas Svejkovsky had a shot block deflect right to him while on the power play to end Isaac Poulter’s shutout streak at 141:06, dating back to 2020-21.

Medicine Hat continued their push with Svejkovsky scoring again in the final minutes to cut the Broncos lead to one. The pressure continued, but the Broncos bent but didn’t break as they held off the Tigers for the 3-2 win to sweep the opening weekend.

The Rebels were also in action in a home-and-home set Friday and Saturday, beginning their season in Edmonton Friday night. Josh Williams scored a hat trick in a 4-1 win on Friday night. Saturday in Red Deer the Rebels scored twice into an empty net in the final minutes of the game to win 4-1 on home ice and split the weekend.

Tuesday will be the first of six meetings between the Broncos and Rebels this season, though just two of those games come before the Christmas break.

There will be a special presentation before the game honouring the life of Broncos alum Colby Cave. Special merchandise will be available for sale throughout the game, with all proceeds going towards the Colby Cave Memorial Fund.