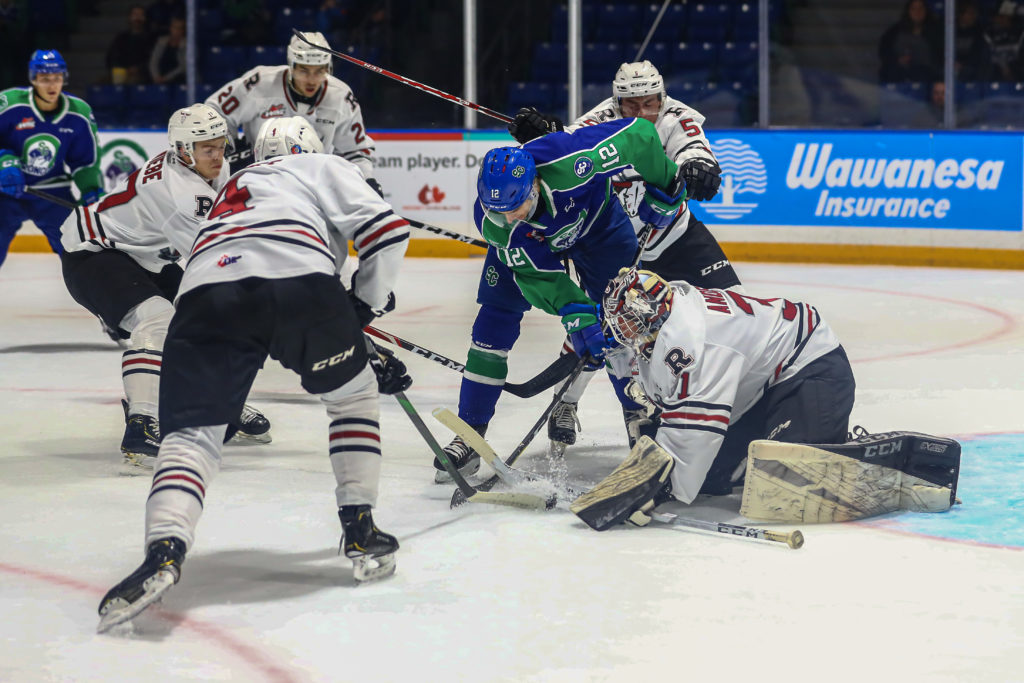 SWIFT CURRENT, SK – The Swift Current Broncos (5-13-1-2) are hoping to put Friday’s lopsided loss to the Regina Pats behind them as they welcome the Red Deer Rebels (7-13-0-3) to the Innovation Credit Union iPlex on Tuesday.

Friday the Broncos were stymied on two breakaways in the opening few minutes before the Pats opened the scoring. Riley Krane scored off a blocked shot at 9:35 which opened the floodgates for Regina.

The Broncos ran into penalty trouble all night and it cost them as the Pats would strike three times on the man advantage. Two of those goals came in the first period, both scored by Robbie Holmes just 1:54 apart to give Regina a 3-0 lead after one.

Regina scored another power-play goal just 2:17 into the second and Holmes would complete the hat trick with under two minutes left in the period as the Pats led 5-0 through 40 and were outshooting the Broncos 42-15.

Zack Smith capped off the scoring in the third and the Broncos couldn’t break through on their own power play, finishing the game 0-for-6. They had a five-minute power play in the third and a full two-minute 5-on-3 but couldn’t solve Max Paddock who turned aside all 25 shots he faced for his third career shutout.

The Rebels had a forgettable night of their own in their last game as they were pounded 11-2 on home ice by Lethbridge. The Hurricanes led 5-0 after one and added three goals in the second and third periods to cruise to victory. Dylan Cozens led the way with a goal and three assists while defenceman Calen Addison scored a hat trick. It was the first time Red Deer gave up double digits in goals since March of 2007.

Tuesday is the second meeting of the season between the Broncos and Rebels as Red Deer was in Swift Current on October 4, taking a 5-1 game. Goaltender Ethan Anders was the story that night, making 27 saves to be named the game’s first star. A handful of his saves were highlight-reel worthy as he frustrated the Broncos.

Following Tuesday’s game the Broncos will hit the road to begin a home-and-home set with the WHL’s top-ranked team, the Prince Albert Raiders.