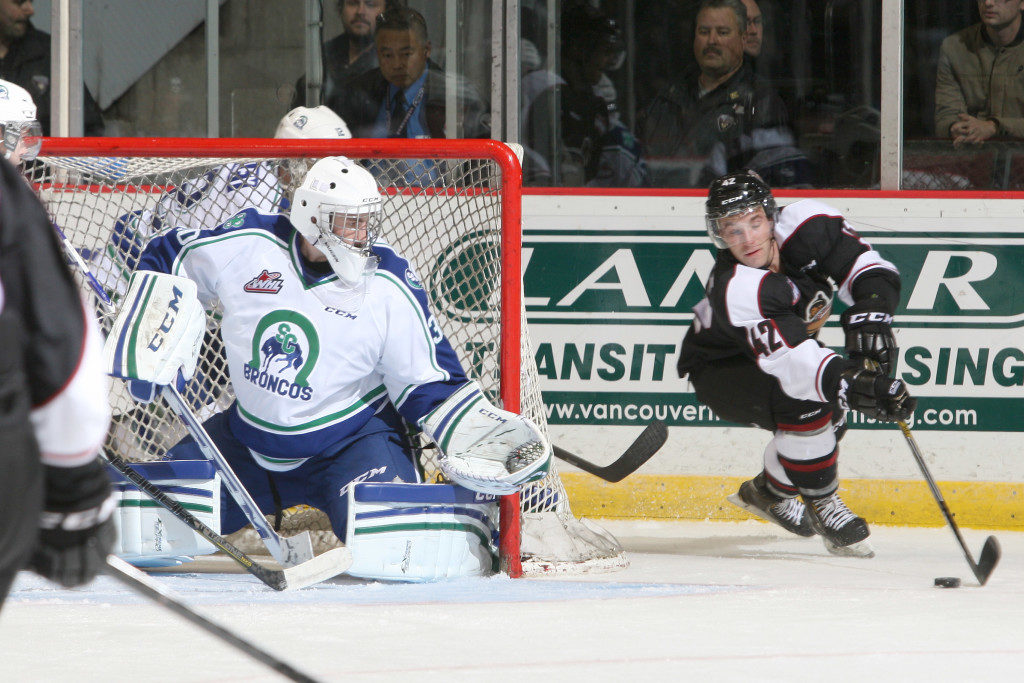 LANGLEY, BC – The Swift Current Broncos (2-6-1-1) lost their sixth game in a row Friday night, 4-0 at the hands of the Victoria Royals. Their road trip doesn’t get any easier as they head back to the Mainland to play the Vancouver Giants (6-6-0-0) Saturday night.

Friday, the Broncos found themselves trailing 1-0 after a solid opening 20 minutes in which they outshot the Royals 11-8.

The second period was a different story as the Royals dominated just about start to finish, outshooting Swift Current 22-4 and scoring three more times to cruise to the 4-0 final.

Isaac Poulter turned aside 36 shots in the loss while Brock Gould made 23 saves for his first career shutout.

The Giants had a forgettable night of their own on Friday as they were hammered 6-0 on the road by the Kamloops Blazers.

Vancouver couldn’t stay out of the penalty box and the Blazers made them pay, going 4-for-8 on the man advantage en route to the win. Kamloops’ captain Zane Franklin led the way with a hat trick and an assist.

Widely considered favourites to return to the WHL finals, the Giants haven’t found their groove just yet this season. Their goal differential sits at zero, with 32 goals for and against on the season.

David Tendeck was on the hook for all six goals against on Friday, so the Broncos can expect to see Trent Miner in net on Saturday. The seventh-round pick of the Colorado Avalanche has struggled out of the gate to a 1-4 record, 3.46 GAA and .878 save percentage, compared to 1.98 and .924 last season.

The Broncos will stay in Langley overnight before making the trip to Prince George on Sunday, finishing their five-game swing against the Cougars on Tuesday.