Preview: Broncos look for bounce back against ICE 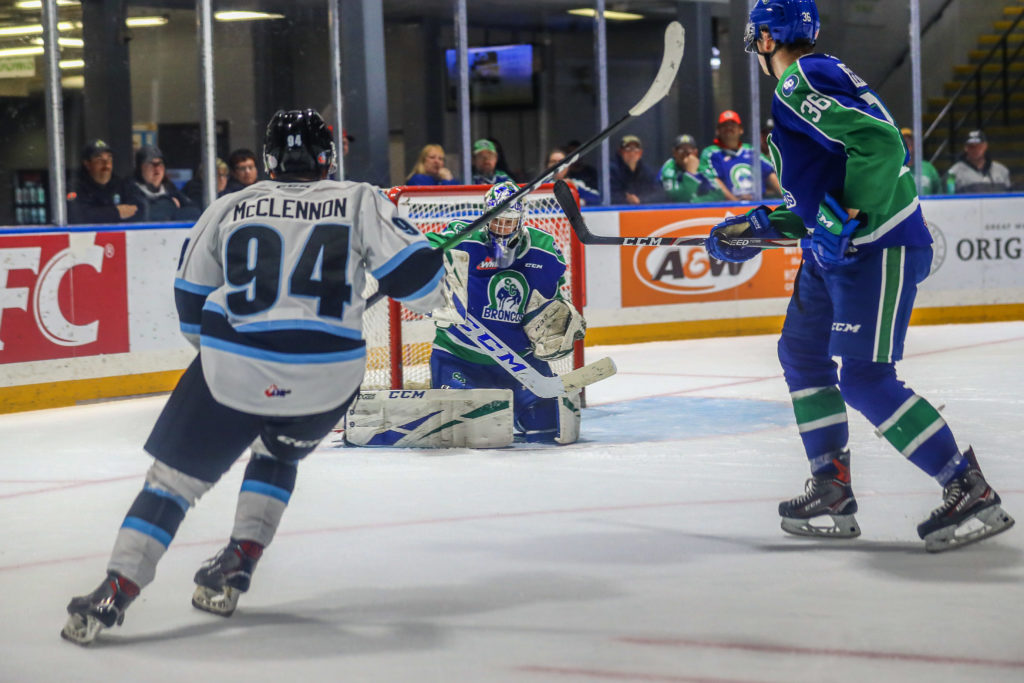 WINNIPEG, MB – The Swift Current Broncos (3-8-1-2) are looking for a rebound performance after a 5-0 loss in Brandon to the Wheat Kings Friday night. Their opponent tonight, the Winnipeg ICE (7-6-1-0), are looking for the same thing as they were hammered 8-2 by the Lethbridge Hurricanes last night on home ice.

Reece Klassen turned in a stellar performance for the Broncos on Friday as he was peppered with 53 shots throughout the 60 minutes. He had made 10 saves before the game was 10 minutes old, and stood tall on a full two-minute five-on-three power play early in the third period to keep his team within striking distance.

The Broncos were given an excellent opportunity to open the scoring with a five-minute power play after Braden Schneider was ejected for kneeing Joona Kiviniemi, but couldn’t solve Ethan Kruger. Kruger’s finest save of the game came on that penalty kill when he stretched across with his blocker to take a goal away from Carter Chorney, who was then called for slashing in the ensuing scrum to negate the remaining 50 seconds.

Brandon opened the scoring late in the first after some sustained zone time in the Broncos end and led 1-0 after 20. The game stayed 1-0 until late in the second after Garrett Sambrook was given five and a game for checking Riley Ginnell from behind. With 31 seconds left in the period, Nolan Ritchie made it 2-0.

The huge penalty kill to start the third period didn’t shift the momentum much as the Wheat Kings would eventually add three more goals in the final five minutes to make the final score 5-0. It was the fourth time in 14 games the Broncos have been shutout this season.

The ICE meanwhile were looking for a double header sweep of the Hurricanes after a 4-3 shootout win on Wednesday, but it wasn’t meant to be as the Hurricanes came out flying en route to the 8-2 win. Oliver Okular scored a hat trick and Dylan Cozens had four points in the lopsided victory.

This is the second meeting of the season  between the two clubs; October 12 the Broncos came out flying and led 5-1 after 20 minutes, but the ICE clawed their way back to tie the game on a power play late in the third before taking the 6-5 shootout win.