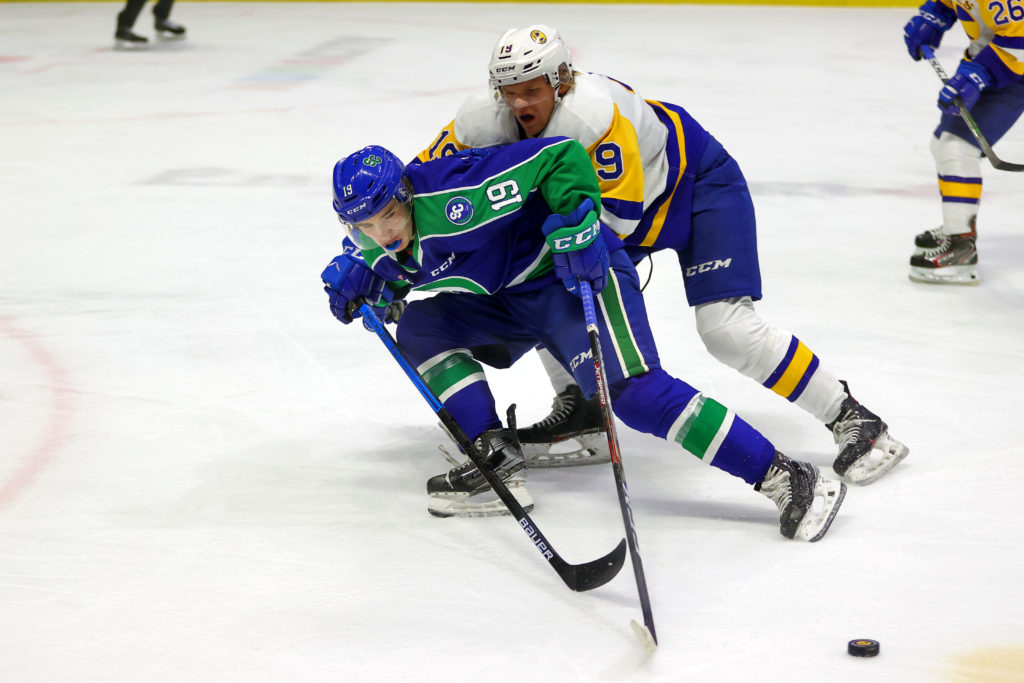 Regina, Sask. – The Swift Current Broncos (3-12-1-0) are coming off one of their most complete efforts of the season in a 4-2 loss to the Prince Albert Raiders on Sunday, and are now hoping to carry that effort level into a meeting against the top team in the East Division, the Saskatoon Blades (12-2-2-0).

It took until the final minutes of the second period on Sunday for the first goal of the game to be scored when Michael Horon gave the Raiders a 1-0 lead through 40. Michael Farren was robbed by the paddle of Max Paddock in the first period and stopped on a penalty shot in the second. Reid Dyck also faced a penalty shot in the middle frame, turning aside Evan Herman.

The Broncos power play scored for the second straight game with Cole Nagy finishing off a nice passing play to tie the game early in the third, but the Raiders would score a power-play goal of their own to retake the lead a few minutes later.

Herman finished off a two-on-one rush to extend Prince Albert’s lead to 3-1 before Mathew Ward capitalized on a turnover behind the Raiders net to cut their lead to 3-2. The Broncos pushed for the equalizer, but Eric Pearce hit the empty net for a 4-2 win. Dyck finished with 33 saves in the Broncos crease.

The Blades are coming off a big victory over the Brandon Wheat Kings in the late game on Sunday as the two teams had identical 11-2-2-0 records heading in. Rookie forward Brandon Lisowsky scored with just over three minutes remaining to push the Blades ahead 3-1 before Brandon scored with six seconds left for the 3-2 final score.

Nolan Maier had a strong performance in net, turning aside 42 shots as the Wheat Kings outshot Saskatoon 44-22.

Wednesday is the third meeting of the season between the Broncos and Blades and while Saskatoon has won the previous two, the Broncos were in a good position to win both.

Swift Current carried a 2-1 lead into the third period in the opening game of the season before the Blades turned up the pressure in the third, scoring three unanswered to take the game 4-2. March 24 Josh Filmon’s first WHL goal put the Broncos up 5-3 with eight minutes to go in regulation, but Saskatoon tied the game in the final minute with the net empty before Tristen Robins scored the overtime winner.

The Broncos are looking to avoid dropping their sixth game in a row while the Blades are searching for a four-game winning streak.

Catch the action on watch.chl.tv or tune in to the broadcast on Living Sky Casino Broncos Hockey on The Eagle 94.1 with the pre-game show starting at 3:30.