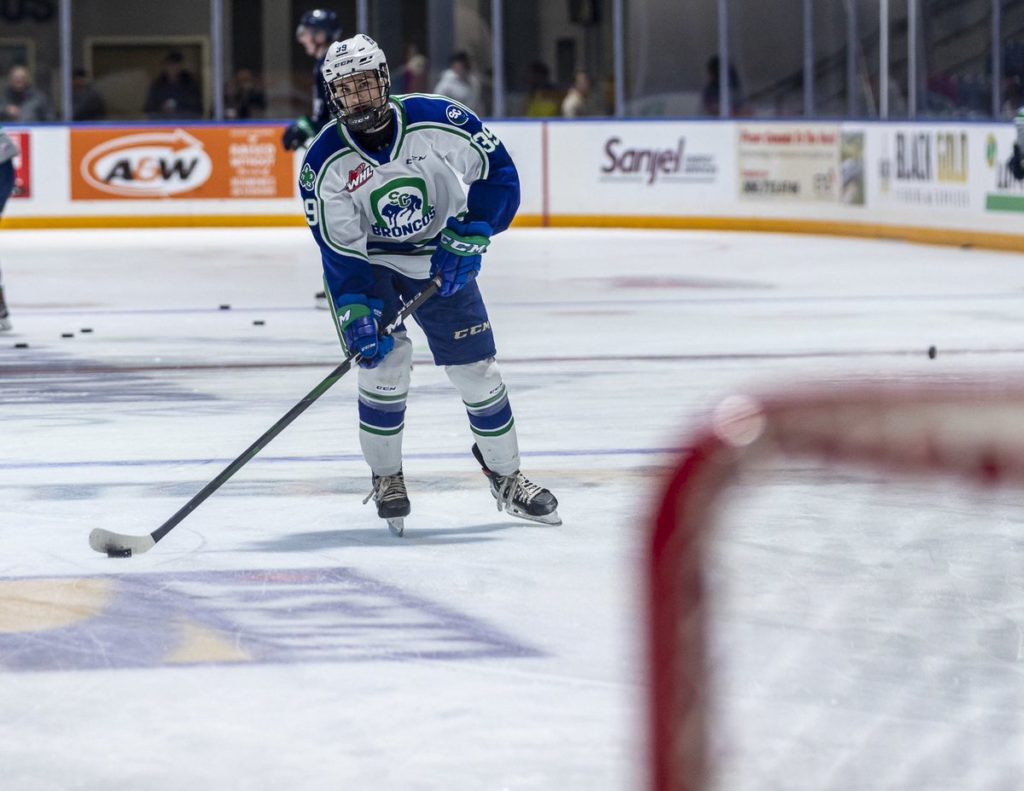 Years of hard work paid off for Braeden Lewis on May 3, 2018 when he was drafted 114th overall by the Swift Current Broncos in the Western Hockey League Bantam Draft. It was a moment he had been thinking of for a long time.

“Going into your first year of bantam, you see the older guys get drafted and it becomes something you really work towards,” Lewis said. “Seeing your name get picked, it’s a huge weight off your shoulders. You work so hard over those two years and you’re a little nervous in that second year leading up to the draft. It was a great day all around, because you get to see your friends get drafted too.”

The Broncos drafted Lewis with their second pick in the 2018 draft after he scored 23 goals and 24 assists in 28 games with the Southwest Cougars of the Manitoba Bantam AAA league.

A phone call shortly before the draft gave Lewis a hint he may be a Bronco in the future.

“I talked to them just before the draft started and after I got off the call, I started researching the town and the team,” Lewis recalled. “Being picked by them was a huge honour and I hope to someday come to the organization and help out as much as I can.”

Lewis says Swift Current being close to his hometown of Virden, Manitoba is an added bonus, and knows his family will be making plenty of road trips in the future.

With the Broncos still in the playoffs at the time of the draft, Lewis was able to get a glimpse into the team he hoped to play for down the road before attending his first training camp.

“I followed the team throughout the Memorial Cup and playoffs, and coming into camp with a team that had just won the championship I was really nervous,” Lewis admitted. “When you come to camp you get to see how good players have become through their experience in the WHL. You can pick their brain a little bit about the things they’ve had to do to get where they are, and as a young kid that really helps out a lot.”

Lewis returned to the Cougars program, now making the jump to the U-18 level, where he scored 10 goals and 20 assists in 45 games.

It was after the 2018-19 season that Lewis put pen to paper and signed his Standard Player Agreement with the Broncos.

“It was a family decision when it came down to it,” Lewis said. “There have been a couple of guys from Virden who have gone the college route, and you’re able to talk to them and see what they like about it. But my mind and my heart were set towards playing in the WHL and I think the Broncos have given me an excellent opportunity to do that.”

Family carries a lot of importance within the Lewis household, and Braeden’s older brother Tanner is a big part of that.

“Everything I’ve done has just been trying to follow him,” Lewis said. “He’s been a role model of mine ever since I was a little kid watching him play bantam and get drafted by Moose Jaw. He was drafted in the same year as Braden Point who’s playing in the NHL right now, so I was able to talk to him about his experience at his first camp. This past year he was my assistant coach as well, so we were able to share more moments and memories together.”

Tanner was a ninth-round pick of the Warriors in 2011 and played 172 games in the Manitoba Junior Hockey League.

One training camp, one season of U-18 hockey and a WHL SPA under his belt, Lewis returned to the Innovation Credit Union iPlex for training camp in the fall of 2019 with a better understanding of what to expect.

Now a signed prospect, he was eligible to play in pre-season games and suited up for four of them.

“You walk into the locker room and you see your name on the back of a Broncos jersey, I kind of had to sit there for a minute and take it all in,” Lewis said. “Getting to share that moment with a lot of other young guys, including Caleb Wyrostok who I’ve grown really close to over the past year, was awesome and I’m looking forward to playing with all of those guys.”

Lewis picked up an assist in his four-game stint before returning to the Cougars for a second season.

Not before having a parting conversation with Broncos brass, however.

“They tell you what they think you can improve on and what you did good,” Lewis said. “Those little chats with the coaches are a big confidence booster. It tells you what you have to do to make that jump to the next level. It’s really amazing getting to talk to high-level coaches like Dean, Brandin and Scott. I really hope I can be there next year to work with them.”

Being a returning player to the Cougars, the coaching staff entrusted Lewis with the captaincy for the 2019-20 season.

“I love winning,” Lewis said when asked why he thinks the coaching staff awarded him the ‘C’. “I hate to lose and all I want to do is help the team win. When they gave me the captaincy I knew I had to take in the opportunity, but I wasn’t the only leader. We had a lot of older guys who were coming back and showing the younger guys what they had to do to succeed. We came into the season and I think a lot of teams looked at us like we would barely make the playoffs, but we finished in the top four, and I think our leadership group played a big part of that. We weren’t the most skilled team, but we were definitely going to be the team that wanted to win the most.”

The Cougars went 34-12-2 over the regular season and were set to host Western Regionals for the Telus Cup before the season was cancelled.

Lewis led by example as team captain in 2019-20, more than doubling his point total from the previous year with 20 goals and 44 assists in 46 games. His 64 points put him sixth in league scoring.

“I think leadership is a big thing with Braeden,” Broncos Director of Player Personnel Gary Aubin said. “He’s just such a smart player. His vision is what sets him apart, he can make a lot of players around him better. He’s the type of player you can move up and down the lineup and can complement anyone he plays with.”

Lewis got his first taste of regular season action when he made his WHL debut January 5 against the Seattle Thunderbirds.

He was called up earlier in the week and says he’ll never forget the moment.

“I was sitting in my basement and got the call from Dean that I was coming up to play,” he recalled. “I honestly didn’t know what to say in the moment.”

After watching the first two games of the weekend, a pair of wins against the Regina Pats, Lewis was inserted into the lineup for the Sunday afternoon against against the Thunderbirds.

“Going out for the solo lap you’re a little nervous, hoping you don’t trip,” Lewis laughed. “But once you get that first shift in, it kind of just becomes another game. The fans were incredible and playing against a bigger team in Seattle was an eye opener because you don’t play against guys that size at the U-18 level.”

The game solidified Lewis’ desire to make the jump to the WHL next season and gave a closer look at the level of work it will take to earn a full-time roster spot with the Broncos in 20-21.

“Playing in a game shows you what the league is all about and what has to be done by me if I want to be successful in the WHL,” he said. “I need to show that I belong. I have to come into camp with the mindset that I belong there and improve on my weaknesses over the summer to make sure I have a more complete game. I’m super excited to come to my third camp and hopefully prove myself.”