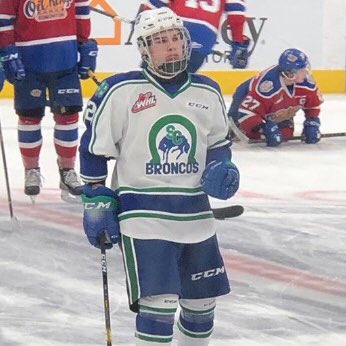 Devin Aubin’s 2017-18 WHL draft year was a roller coaster of peaks and valleys for the defenceman from Falher, Alberta.

The high point came on May 3 when he was selected 75th overall by the Spokane Chiefs in the Bantam Draft. The low point came seven months earlier when he was rushed into emergency surgery for a torn quadricep tendon.

“I got hit knee on knee and they initially thought it was a broken femur,” Aubin explained. “They put me in a leg splint but leg just kept swelling. They got me into emergency surgery and found out it was a quad tendon tear and hematoma in my thigh. I was out for about two months with some pretty intense physiotherapy after that.”

An injury of that magnitude at the young age of 14 could have had a devastating impact on Aubin, but he said it helped shape him into the person and player he’s become.

“I think that’s kind of a big part of who I am today,” he said of the recovery process. “It was a big mental test, and I know not a lot of guys go through that at a young age. I took it as a positive aspect to bring into my life, and I had a lot of great support from friends and family.”

Aubin returned to Grand Prairie’s lineup in December and eventually finished the season with nine goals and two assists in 19 games. He added two goals in three playoff games to head into the offseason on a high note.

Despite the injury and missed time, Aubin still saw his name called in the early rounds of the draft with Spokane grabbing him in the fourth round.

“I was really nervous, but also really excited because I didn’t know where I was going to go,” Aubin said of his draft-day experience.

He cites his skating ability and vision as reasons he believes the Chiefs wanted to add him to their team with their 75th overall pick.

Growing up in Falher, a small town of around 1,000 residents located an hour and 45 minutes northeast of Grand Prairie, it’s no surprise heading to Spokane, Washington for training camp was an eye-opening experience.

“There was a lot of great players there,” Aubin recalled. “Guys like Kailer Yamamoto and Ty Smith. I put my focus on just kind of watching Ty and paying attention to what he does and how he acts. When you’re that young you try to not be a burden during training camp, but guys like that are just such great players and great people that they open up and go talk to you themselves. That’s something I’d like to do myself as I get older, try and help out the younger guys, just like they did for me.”

Leadership is nothing new for Aubin, who has worn letters on his jerseys with teams he’s played for in the past. He hopes to continue that for as long as his hockey career goes.

“I definitely want to be a leader, I think that’s kind of who I am,” he said. “I want to be a leader and be a good community member. Just set a good example for the crest that you’re wearing by taking things you learn from the older guys in years past.”

Aubin returned to Grand Prairie to make the jump to the U18 level for the 2018-19 season, and it wasn’t long before he received a phone call telling him he had been traded to Swift Current.

It was news that came as a shock at the time.

“It definitely wasn’t expected,” Aubin said. “It was a pretty big shock and I didn’t know what to say or how to act. But in the end in worked out great, I’m really glad and thankful and excited to be a part of the Broncos.”

It was announced December 4, 2018 that the Broncos had acquired Aubin, Carter Chorney and Kye Buchanan in exchange for Noah King, Matthew Davis and a conditional 2021 draft pick.

Aubin admits he was nervous heading to a new team after forming bonds and friendships with players during training camp in Spokane.

More unexpected news came less than two weeks later when Aubin met with the Broncos for breakfast in Edmonton, and was offered a Standard Player Agreement.

“It was before a game of mine in Edmonton,” Aubin said. “I went for breakfast and I didn’t know that was coming, so it was a big surprise. I just wanted to take any opportunity I had and I feel very lucky and thankful to have signed.”

When the Broncos were in Edmonton two months later, Aubin would make his WHL debut at Rogers Place for an 11:00 game against the Oil Kings.

This wasn’t unexpected however, as he had known for a while that he would get a chance to suit up in that game.

“I’d say it was probably a few weeks in advance,” he said of when he knew he was going to play. “I had lots of family show up for that game.”

While the end result was a lopsided 11-1 loss for the Broncos, the experience wasn’t one Aubin will forget any time soon.

“The feeling was probably 10 times worse,” Aubin laughed when asked about comparing the nervousness to his draft day. “Stepping on the ice at Rogers Place for the first time was just insane. I remember on my second shift I went to chip the puck high off the glass, but I missed and got a delay of game penalty.”

His first shift was even more memorable, as he picked up a +1 rating by being on the ice for Tanner Nagel’s opening goal.

It was a moment that hardly even felt real for the kid making his WHL debut.

“It kind of just felt surreal,” he admitted. “It was a really good feeling and really exciting and I think it really helped me get outside my comfort zone. It kind of allowed me to think ‘Ok, I can do this.’”

While Aubin didn’t draw into any regular season games during the 2019-20 campaign, he did suit up for the first two games of the pre-season with a plethora of other Broncos rookies.

It was a chance for Aubin to get to know a handful of the guys he could be teammates with for the next few seasons.

“It definitely helped me get more comfortable,” Aubin said. “Just creating a bond with all those guys and further my experience in the Western Hockey League to help get used to the pace.”

Aubin spent the 2019-20 season with the Grand Prairie Storm U18 team, scoring four goals with an assist in 22 games before the season was cut short due to COVID-19.

Heading home early allowed him to take part in more of the farming season than he had been able to in years past.

“I’m really fortunate to be able to work on my friends farm every summer when I come home,” he said. “It really allows me to grow some life skills and learn about hard work. I was able to help out with seeding this year, but I also help out with general maintenance and getting equipment ready.”

With hockey in Alberta on hold for the time being, Aubin is back at home in Falher awaiting word on when to head to Swift Current for training camp.

He says he’s looking forward to getting back into a routine.

“Really looking forward to seeing the guys again,” he started. “Being able to get back into that high-pace game is going to be really nice.”

While being a smaller-sized defenceman at 5’8’’, Aubin believes the game of hockey is changing and allowing smaller defenceman to be more and more effective.

“As years go on, you’re starting to see teams picking up smaller defenceman,” Aubin said. “Hockey is definitely turning into more of a skilled game where smaller guys can be more effective, and that’s an opportunity for me to take advantage of.”

Aubin has one goal in mind heading into training camp: make the roster as a full-time WHL player.

“I definitely need to keep my feet moving and move the puck as hard as I can. I want to show my strength because I’ve been working a lot on getting stronger this offseason.”