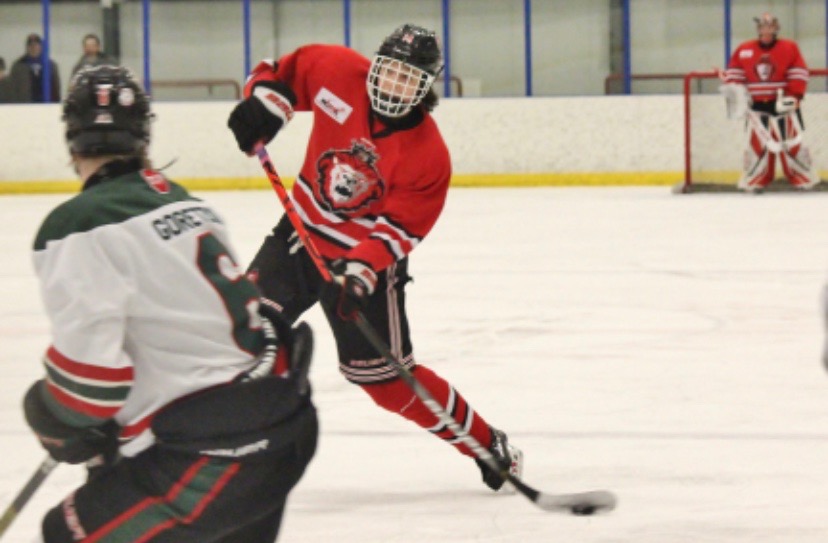 Grayson Burzynski’s Western Hockey League draft day was everything he could have asked for and more.

Even though he didn’t see it play out in real time.

“I was watching the first round on the tv, but I was pretty sure I wasn’t going to get drafted [in the first round],” Burzynski recalled. “I ended up going outside to play basketball just to try and get my mind off it. Then my phone started blowing up and everybody was saying congratulations to me.”

It was then Burzynski discovered he had been drafted by the Swift Current Broncos with the 44th overall pick.

As if that moment wasn’t special enough, his good friend and teammate Rylan Gould was drafted by the Broncos two spots before. It was something the two had even discussed leading up to the draft.

“Rylan and I had talked about it before, because Swift Current had talked to us quite a bit throughout that season,” he said. “We just thought it would be so crazy if we both got drafted by the same team, because we’re really good friends, and then it ended up happening.”

Swift Current was happy to grab the teammates from the Winnipeg Monarchs U15 program after their stellar seasons in which Gould scored 86 points, fourth in the league, and Burzynki led the league in defencemen scoring with 58 points.

In total Burzynki scored 19 goals with 39 assists to lead the pack among defenders, with both goal and assist totals also ranking first in those categories.

As expected, Burzynki was happy with his 2019-20 season too.

“I was really happy with it, I didn’t think I was going to have a season like that,” he said with a laugh. “My defensive coach was really good. He gave me a lot of opportunities to play a lot of minutes.”

That coach was Dean Court, whose son Sam was a third-round pick of the Broncos in the 2019 WHL Draft.

Burzynski’s team had a strong season overall as well, finishing second in the WAAA U15 standings with a 28-5-2-1 record.

Their play got them to the city finals against the Winnipeg Warriors, who were a juggernaut as they went 36-0-0-0 during the season. The Warriors won the series four games to one.

“We thought we could have finished first, but that Warriors team was absolutely stacked,” Burzynski said. “It was a pretty hard-fought series. We took them to overtime twice, which I thought was pretty good since we hadn’t beaten them all year.”

Burzynski continued his strong play through the post season as he scored six goals with eight assists in 10 games.

Born in Iowa City, Iowa when his dad was working through his residency, Burzynski had also been a strong volleyball player throughout school. When it came down to it, it wasn’t a tough choice for him to focus full-time on hockey.

“My parents were both pretty good volleyball players and my sisters play too,” he explained. “I decided to play during school and I really enjoyed it. During my draft year I was playing volleyball and hockey, and there were times where I had to miss hockey for volleyball and vice versa. Hockey was always my main sport so it wasn’t really a big decision for me.”

Burzynski did his homework leading up to draft day, admitting he did a bit of research on every team in the league so he would have some knowledge on the team that drafted him.

While he didn’t know much about the Broncos before the draft, he unknowingly had a bit of a connection to the organization as a good friend of his is the son of former Broncos assistant coach Ryan Smith.

Burzynski was primed to make the jump to the U18 level for the 2020-21 season, but was only able to play two games before the season was shut down, eventually for good.

“It was extremely disappointing,” he said. “When I got the news that we wouldn’t be able to play I was so mad. I was able to work out a lot, which was nice, but I think I needed to be on the ice and I wasn’t able to do that as much as I wanted.”

There was a two-month stretch where he and his teammates were able to practice together, and Burzynski said he regularly went to outdoor rinks so he was able to skate on his own.

Burzynski says he’s counting down the days until he can head to Swift Current for his first WHL training camp.

“I’m really excited, I’ve been thinking about it for a while now,” he said. “I don’t even know what to expect really, I’ll just have to see what it’s like once I get there.”

With his eye-popping offensive numbers from his draft year, it would be fair to assume Burzynski is an offensive defenceman, but he says he doesn’t want to be one dimensional.

“I would say I’m an offensive player, but if a team needs me to be a lockdown guy, I can do that too,” he said. “On our Monarchs team they needed someone who could score goals, so that’s the kind of role I filled.”

With eyes toward eventually making the jump to the WHL, Burzynski is happy to gradually work himself up the lineup with the Broncos.

“I’d like to be the same kind of player I was with the Monarchs, but I know the first little while won’t be like that,” he said. “I know at the start it will be more like limited minutes, but I hope I can become a guy that they can use on the power play or someone they put out in the final minutes of the game. I’d love to be ‘the guy’ Swift Current Broncos.”