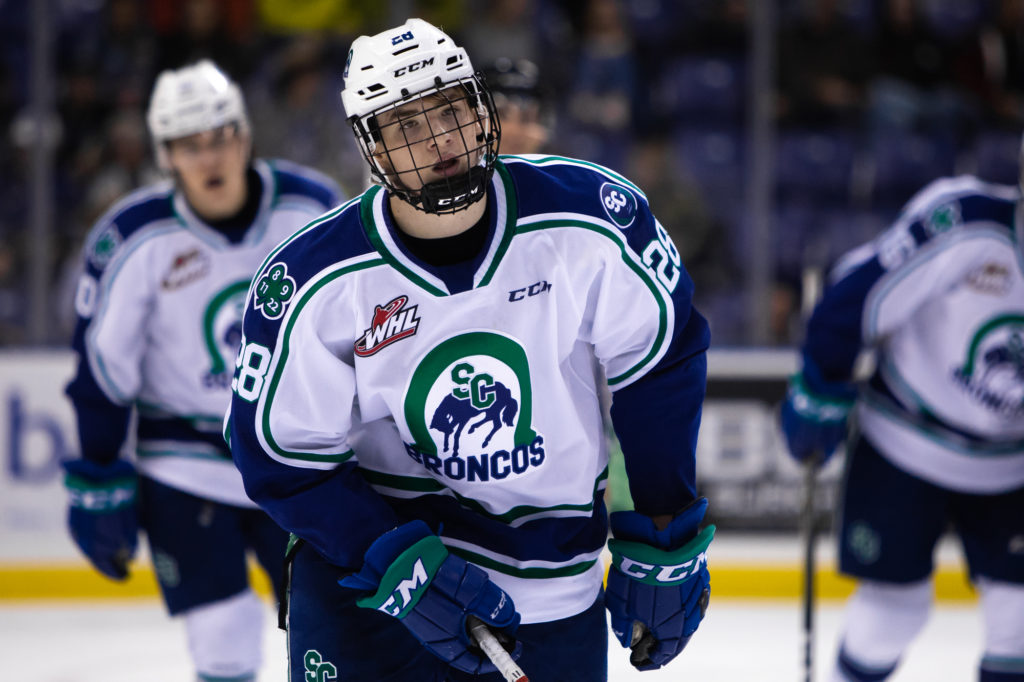 A hat trick in his first Western Hockey League pre-season game was an emphatic way to burst onto the scene, but the 2004-born forward from Airdrie isn’t getting ahead of himself.

“I wanted to make an impact right away,” Davies said. “It was pretty cool for that to happen in the first game, but I can’t let it get to my head. It was just pre-season so I just have to keep looking ahead.”

Davies scored a minute into the Broncos first pre-season game against Moose Jaw August 30 before adding a power-play goal six minutes later and a shorthanded goal in the third period of an 8-5 Broncos win.

He would also score in the next two pre-season games he dressed in, heading into his 2019-20 midget campaign with five pre-season goals under his belt.

Drafted 54th overall in 2019, Davies scored 20 goals and added 11 assists in 31 games with the Pacific Coast Hockey Academy Sea Devils in 2019-20, marking a smooth transition from Bantam to Midget.

While it was a strong showing for Davies, the team struggled to a 8-25-3 record.

“There were times when it was really tough,” Davies admitted. “I love to win and I love to compete. Sometimes it got tough but you just try and tell the guys to keep going and to not give up.

The Sea Devils scored just 98 goals as a team, meaning Davies was responsible for a little over 20 per cent of the team’s total goals.

There’s an old saying that everyone is their own hardest critic, and that holds true for Davies.

“I’m not too happy with the year overall,” Davies said. “I thought it could have gone a lot better. I was pretty shaky at the start for the first few games, but once I started getting a little more ice time the confidence came back.”

The Broncos organization began to restock the prospects cupboard with the 2019 Bantam Draft, acquiring a first, two thirds and a fourth over the course of the 2018-19 season. One of those thirds, acquired from the Calgary Hitmen in exchange for Kaden Elder, was used to select Davies.

“We look into the future and you look at Mathew Ward giving Davies the puck on the fly,” Broncos director of player personnel Gary Aubin said. “It’s pretty exciting for the future. There were times when Davies would get the puck in full stride and nobody was stopping him.”

When watching him play or viewing highlights, it’s clear to see one of Davies’ biggest assets is the release of his shot.

“I think it just came with how much time I spent on the ice,” Davies said of his shot development. “With how many practices I would go to per week. I just kept shooting the puck and it ended up being like that. I’d say I work on my shot quite a lot right now, just trying to get it up to that pro level.”

Davies got into three games with the Broncos during the 2019-20 regular season, with his WHL debut coming October 18 in Victoria when Swift Current was in the midst of their B.C. Division swing.

Even though he had known a week or so in advance that he was going to play in that game, there were still a few nervous moments for Davies that night.

“I was feeling good leading up to the game,” he said. “There were a couple moments where I was maybe overthinking it a little bit and had those butterflies, but I tried to just think of it as any other game. The coaches put a fair amount of trust in me that game and gave me a lot of ice time.”

The biggest adjustment for players coming into the Western Hockey League is often the size and physicality of the opposing players.

Davies was listed at 5’10’’ and a 180 pounds with Pacific Coast Hockey Academy, and his physical game appears to be just as developed as his scoring touch.

“You never want to compare kids to NHL guys because that’s not fair to them,” Aubin said. “But Josh is kind of like those 5’10’’ or 5’11’’, 185-pound guys who can go into the corner against a big defenceman and still come out with the puck. He’s so strong, has a great centre of gravity and very rarely got knocked down.”

Already signed to a Standard Player Agreement, Davies has his sights set on a full-time roster spot with the Broncos for next season.

“I want to help them out with this rebuild they’re going through,” Davies said. “I’m glad they have trust in me to help them do that and hopefully we can win a WHL championship together.”