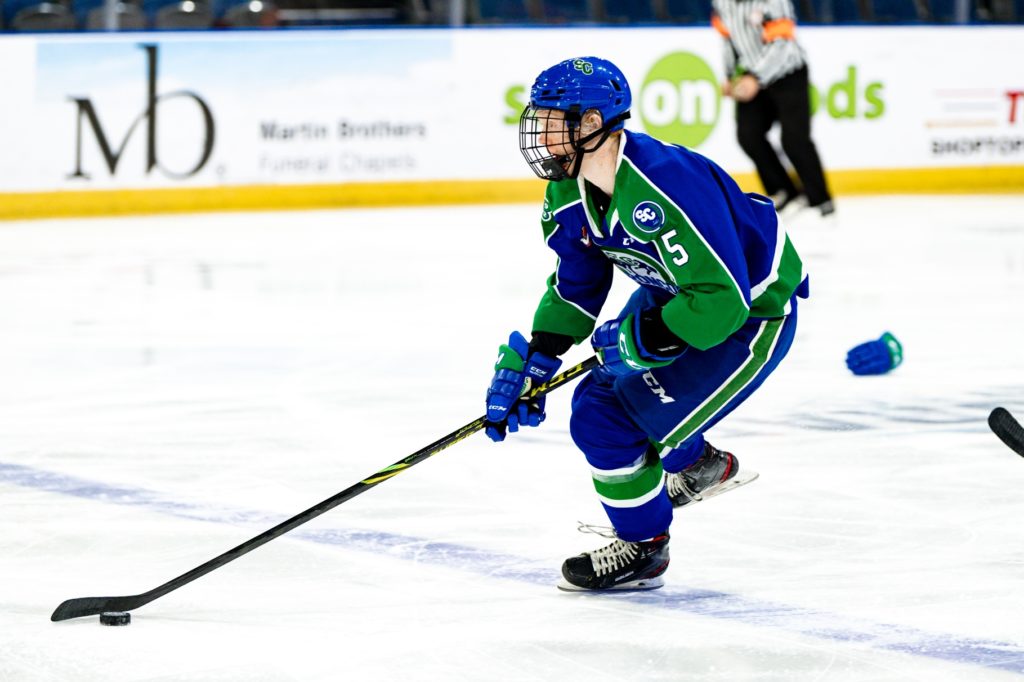 Josh Fluker made a strong first impression with the Swift Current Broncos. Drafted seventh overall in the 2021 WHL Prospects Draft, Fluker was able to get into 10 games in the back half of the 2021-22 season, five more than usually allowed, due to injury troubles to the Broncos blue line.

With five assists in those 10 games, Fluker showed the massive potential that lies within his game.

“It was unreal,” he said. “I’m really grateful for that. Just taking that opportunity into next season I think will be really big for me.”

Due to the 2021 WHL Prospects Draft being delayed from May until December, Fluker had to wait an additional seven months for the big day. Though he says he’s also grateful the draft was delayed.

“Before it got delayed, I would say I wasn’t exactly on the charts,” he explained. “It kind of worked out for me that it was delayed. I kept working really hard during that time and had a couple of tournaments in between. I really improved my game and kind of took off.”

The Broncos held back-to-back picks in the December draft, and Fluker watched his childhood friend Clarke Caswell get selected sixth overall just moments before his name was announced. He said he didn’t even have time to congratulate Caswell before seeing himself get drafted.

You wouldn’t know it after watching him play, but Fluker admits he was as nervous as could be before making his WHL debut on February 4 against the Moose Jaw Warriors.

“Two days before the game I got the call and I was pretty excited,” he said. “I could barely even stand, my legs were shaking. I thought I took my confidence to a good level and was able to play pretty well.”

Playing pretty well might be an understatement, as Fluker showed the poise of a veteran defenceman during his brief time in the WHL during the 2021-22 season.

Fluker says his smooth skating ability is his biggest asset, and is something he honed on the outdoor rinks during the frigid Manitoba winters.

“It’s something that kind of came on when I was in Atom,” he said. “It started to show a lot then. I spent a lot of hours on the outdoor rink, and in the normal rink, just kind of floating around and fooling around with my edges. I guess I got pretty good at it.”

He also had a strong performance with his U18 team as the Southwest Cougars were hosting the Western Regionals for the 2022 Telus Cup. After a first-round exit in the MU18HL playoffs, the Cougars put on a strong showing at Regionals, reaching the final against the Notre Dame Hounds.

“We played a really good team in the first round and had a tough time controlling them,” he said. “We had two months off until the tournament started so we had a few breaks to rest up and prepare. I think we really showed what we had. Notre Dame scored with 17 seconds left in the final, so we were that close to a national championship appearance.”

Fluker’s offseason has involved plenty of work in the gym as he says working on physical strength is his main goal.

“My strength is my biggest weakness right now,” he said. “I’m in the gym really trying to focus on that. I’m also skating a few times a week to make sure my game stays intact. I want to make sure I’m keeping my body stretched out and fresh so that I’m ready to go for a 68-game season.”

He’ll have an opportunity to showcase himself in just a week’s time when he heads to Calgary for Hockey Canada’s U17 Hockey Challenge Camp, which runs July 10-16.

Fluker’s excitement when asked about becoming a full-time WHL player in the Fall was obvious, and the expectations for what the Broncos could do in 2022-23 are starting to rise as well.

“I mean our roster is going to be stacked,” he stated. “I think we have great potential and I think we can make a deep playoff run.”