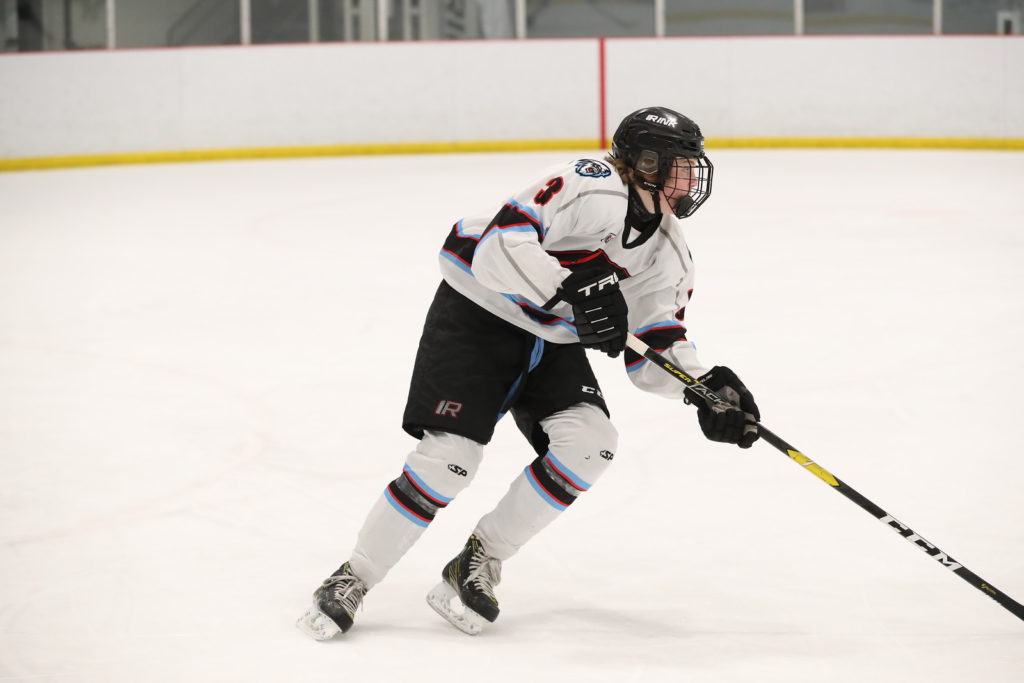 Owen Pickering had to wait until the ninth round of the 2019 Western Hockey League Bantam Draft to see his name appear on the screen. As if that wait wasn’t long enough, it was extended even further.

“I was in French class with a bunch of friends and there was a 45-minute break in between the eighth and ninth rounds,” Pickering recalled. “But we didn’t know that was happening so we were getting a little worried. Then my name popped up on the screen and it was such a cool feeling knowing that the Broncos were taking a chance on me.”

The wait suddenly felt worth it for the defenceman from Manitoba as he realized a goal of his; getting drafted into the WHL.

Pickering wasn’t about to rest on his laurels, however.

“It was pretty cool, my family was congratulating me and my grandparents came over for dinner,” he said. “We talked about hockey and what Swift Current might look like. It was a cool day but it doesn’t really stop. Once you get drafted that’s only the beginning.”

Standing at nearly 6’2’’, Pickering was one of the tallest players on his Rink Hockey Academy Elite 15’s (RHA) team this past season, but it wasn’t that long ago where 6’2’’ seemed like a pipe dream.

“At the start of my last bantam year I was 5’7’’,” he said. “I’ve worked on my coordination a lot though. I’ve played so many different sports ever since I was a little kid so I think that’s helped me a lot.”

The Broncos scouting staff thought there was potential in Pickering, not only to grow taller but also develop into a legitimate WHL defenceman.

“His progress has been huge,” commented Broncos Director of Player Personnel Gary Aubin. “He’s going to be a dynamite player in the WHL. He’s just so smart, has great feet and great agility. He just needs to put a little more muscle on that frame of his before training camp, but we’re very excited about is upside.”

Pickering spent the 2018-19 season with the Eastman Selects program before making the transition to RHA for 2019-20.

The Academy, based in Winnipeg, has become a hot spot for Manitoba-born prospects to be able to develop with the amount of on-ice activity they’re able to do, compared to other programs.

“I’d wake up at 6:30 in the morning every day and drive half an hour to school from my house in St. Adolphe,” Pickering said. “I’d take three classes in the morning then we’d hop on the bus for a 10-minute ride to the Rink facility and either go on the ice or do a dryland workout. After our workouts we’d either have team building activities or study hall too.”

After recording 17 points in his draft season, Pickering fit right in with the Elite 15’s level by scoring five goals and 16 assists in 34 games.

He did so alongside a fellow Broncos prospect, as 2019 fourth-round pick Josh Filmon played for the same team.

“Josh is such a great guy,” he said. “I first met him in like grade three and we’ve gone to school together ever since grade five. We’ve talked about Swift Current a lot and we talk about everything. You can tell that he cares about you and everyone else on the team.”

Pickering and Filmon also suited up at Broncos training camp together last fall, Pickering’s first time in the city.

“Training camp was great. The only time I had ever been in Swift Current was when I was driving through on my way to Calgary,” Pickering said. “I was pretty nervous at first but as soon as I got to the rink it was so amazing. Just knowing that maybe one day I would be there and seeing all the veteran players play. Not feeling like I was out of place when I was there was a really big confidence booster for me.”

That confidence carried over into the 2019-20 season for Pickering, though he says he never had any specific goals in mind for his offensive production.

The production and growth so far in Pickering’s career has been impressive so far, and Aubin believes that won’t stop any time soon.

“I think 100 per cent he will,” Aubin said of Pickering’s potential to be an offensive defenceman in the WHL. “He always had the sense and the smarts about him, like he can run a power play. Now when you project that into a 6’2’’ frame, he hasn’t lost any of those smarts, he’s just bigger and stronger.”

“We were a pretty confident group the whole year I think,” he said. “We had a bit of a rough patch in the middle of the year, but the last weekend we needed to go 3-0 against some tough B.C. teams and we just gelled together. That was the most fun I’ve had playing hockey.”

The team got off to a good start at the CSSHL Championships in Penticton with 5-3 wins over Edge and West Van Academy, but had their season cancelled due to the COVID-19 pandemic.

“That really sucked,” Pickering said. “We were flying high and we were getting ready to play a really good NAX team, but we were really confident we were going to beat them. We honestly thought we were going to win the whole thing. Some things you just can’t control, but you wish you could control them sometimes.”

The Northern Alberta Xtreme were the only team that finished above Rink in the Elite 15’s standings.

While Pickering hasn’t signed a WHL Standard Player Agreement just yet, it’s something he’s put a lot of thought into ever since being drafted by the Broncos.

“Nothing’s finalized yet and we haven’t made any concrete decisions,” Pickering said. “But I’m really excited about the possible opportunity of playing in Swift Current. We’re talking about it as a family, but I think it would be good for me. With the prospect group they have now it’s definitely made it more enticing for me.”