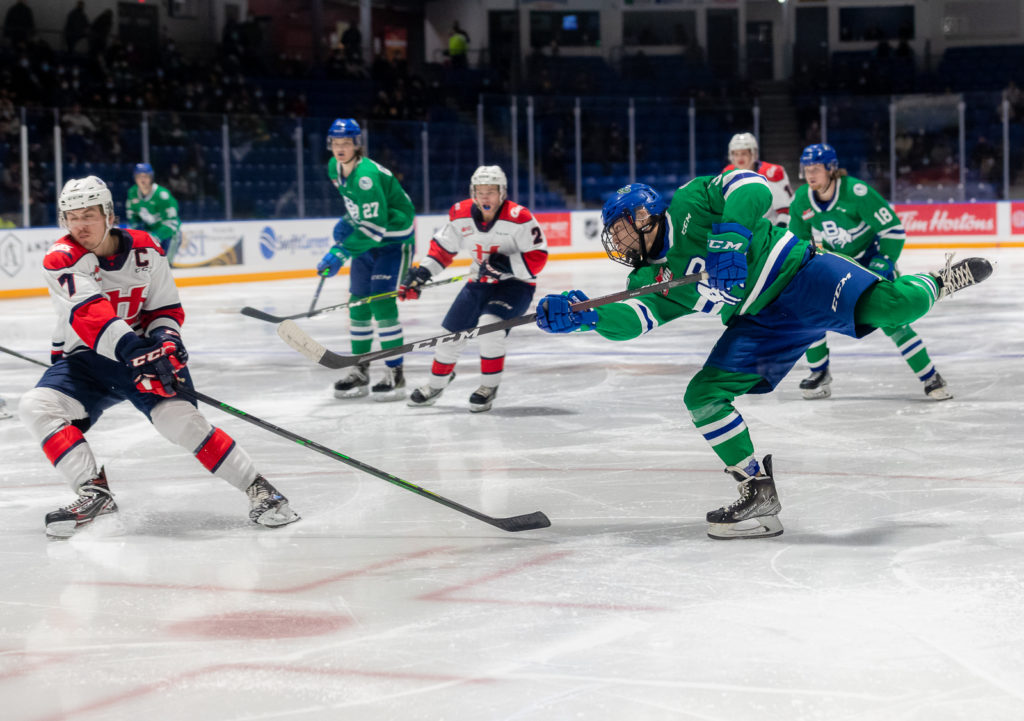 Van Eger always knew he wanted to play hockey. After all, that meant he could follow in the footsteps of his older siblings.

“My brother and sister both played hockey when they were younger,” Eger explained. “I really stayed close to them my whole life, and I just wanted to be like my brother.”

Growing up on a farm near Willow Bunch, the closest rink Eger could go for game action was in Assiniboia, while also having a smaller rink in Willow Bunch for skating, which Eger says he would use for hours every day.

When it came time to move up in competition, Eger’s commute tripled as he played minor hockey in Weyburn.

There was one game in particular that stood out and played a big role in the next step of his hockey path.

“It’s kind of funny because a year or so before that, my dad and I went to Notre Dame and he’d always joke that I was going to move there to play prep,” Eger said. “My mom didn’t like it because she didn’t want me to move away from home. Then we played a game against Notre Dame, and I scored six goals. All (then U15 Hound head coach) Lino Dixon read about me was that I scored six goals against them in one game. He contacted my parents, and then I went to Notre Dame.”

Eger made the full-time move to the dorms at Athol Murray College of Notre Dame in 2019, which he admitted was tough at the beginning, but quickly adjusted to being around his teammates on a daily basis.

He also took on a leadership role, being named the U15 Notre Dame Hounds captain for the 2019-20 season.

“I think just right from the get-go I was a leader on the team,” Eger said. “I would always try and help guys out during practices and things like that. I think that sort of came from my brother and my parents. They always told me to try and make others better instead of focusing on yourself all the time. There’s a part of me that really just wants to lead a team. I want to be ‘that guy’.”

His performance also caught the eyes of WHL teams leading up to the 2020 WHL Prospects Draft, which only fanned the flames of Eger’s inner fire.

Eger’s love for the WHL was shaped, in part, thanks to Brayden Point and the Moose Jaw Warriors, as Eger and his dad would attend Warriors games when he was younger.

When draft day came around, Eger says he watched the first round before distracting himself for the next little while.

“It was spring, so my brother and I went and worked on the air drill,” he recalled. “Some time went by, and I started hearing a bunch of phone calls coming from the house. I figured I should go and see what all those phone calls were about, and I got a call from my mom saying I had been drafted by Swift Current.”

The Broncos drafted Eger with the final pick of the fourth round, 88th overall.

Eger held true to his word about committing to any team that drafted him, officially signing a Standard Player Agreement with the Broncos just a month after the Prospects Draft was held.

With minor hockey across the country impacted severely during 2020-21, Eger was a bit lucky in the sense that he was able to continue working out, thanks to a gym in his brother’s garage, and practice daily at Notre Dame.

“I owe Devan a lot for what he did during that time,” Eger said. “He really pushed our team, even though we didn’t have games. He kept pushing us for over 100 practices, always telling us that there’s still a purpose. That’s really what kept me going through that season with no games.”

Eger was only able to play six games for the U18 Notre Dame Hounds in 2020-21, scoring a goal and two assists.

He said he was thrilled when Praught called him the following summer, letting him know that he had accepted a job with the Broncos.

Nearly a year and a half after being drafted by the Broncos, Eger was finally able to make his way to Swift Current to take part in his first training camp in the fall of 2021. As expected, the nerves were prevalent for the 16-year-old.

“I was definitely pretty nervous, but at the same time I was really, really excited,” he said. “I thought my camp experience was great, I got hit a lot and cut open a couple times, but I’m ready for that. It’s expected, I like that kind of stuff. It gets the adrenaline pumping and really gets you going.”

Eger also dressed for a pre-season game with the Broncos before returning to Notre Dame to begin his first full season at the U18 level.

Though it wasn’t long until Eger received a phone call asking if he could come back to Swift Current to play his first WHL game.

“I actually got a phone call from Devan that morning,” he laughed. “He asked if I could play that night and I said ‘Yep! I’ll be right there!’. I was really nervous leading up to the game, but a lot of the guys in the room were just telling me to play my game and not worry, so they really helped me out a lot.”

Watching that game on November 6 against the Lethbridge Hurricanes, you would never have known it was Eger’s first career game as he looked confident as could be, finding himself on a great scoring chance off the rush and blocking shots late in regulation to preserve the lead.

“I was really happy with the way I played,” Eger said of the 5-1 Broncos win. “I was really happy that Devan put me out in those situations late in the game. I knew I had to showcase myself, block some shots and throw some hits.”

The game clearly gave Eger confidence when he went back to Notre Dame as his offensive game came to life following the WHL debut.

“I think that game gave me a huge confidence boost,” he said. “It was a bit of a shaky start to the year, and I wasn’t picking up many points, but that didn’t bother me too much because I was still there for the team.”

Eger was a key cog in the U18 Hounds engine during the 2021-22 season as the team finished atop the SMAAAHL standings with a record of 35-8-1.

He says it was simply the team’s extreme depth that allowed them to have so much success.

“Just our skill to put the puck in the net,” he stated. “We were such a deep team, we had 10 guys with 10 or more goals. It’s huge when your whole team can all score, so I think it was the depth and the drive that our team had to win that really set us apart. We always joked about going to Telus Cup throughout the season, and I think that just stuck in our heads.”

The Hounds then rolled through the post season, winning the first and second rounds, against Battlefords and the Regina Pat Canadians, in four games and sweeping the Warman Wildcats in three games to claim the league championship.

While the team celebrated deservedly, the mindset quickly shifted toward the next step.

“The celebration was pretty crazy,” he recalled. “But when we got into the dressing room, we all started talking about how this one doesn’t matter, and we had to focus on the next one. It was exciting for a little bit, but we knew we had a job to do.”

The laser focus Eger referenced helped the Hounds carry over their dominance to the Western Regionals for the Telus Cup as the team went a perfect 4-0 at the event.

That included the championship game against the host Southwest Cougars, and Broncos 2021 first-round pick Josh Fluker, which was one that came down to the wire.

“They really brought it to us in that game,” he recalled. “We scored with 17 seconds left to make it 3-2. I was on the bench when it happened, I saw our guy flying down the ice and just a nice shot through the five hole to put us in the lead.”

The Hounds had officially reached the Telus Cup, just like they talked about all season long, and made the trip to Okotoks, Alberta to begin the event.

As expected, the level of competition took a strong step forward at the event, which led to a slower start for the Hounds.

“The competition was a lot better,” Eger said. “Every team was just as deep as our team, everybody on every team could score. We had a bit of a slow start and sort of picked up our socks after that.”

After dropping their first two games at the event, 5-1 to the Moncton Flyers and a 5-4 overtime decision to the Vancouver NE Chiefs, the Hounds rebounded with a pair of 4-1 wins over the Mississauga Reps and Sydney Rush.

After dropping their final round-robin game to the Cantonniers de Magog 5-4, the Hounds were set for a semi-final matchup against that same team the following day.

The game was tied 1-1 after 20 minutes but slipped away from the Hounds in the second period.

“We were doing ok in the first period but coming out for that second I thought we played well for the first 10 minutes,” Eger recalled. “But they really brought it to us in the last 10 minutes and scored a couple goals. When there was maybe 15 minutes left in the third period, it seemed like we kind of just gave up. It’s tough because it’s not the way we wanted it to end. We wanted to get to the Telus Cup final, but that’s just the way it happened.”

The Cantonniers won the game 8-2 before eventually losing to the Moncton Flyers in the championship game.

With a long 2021-22 season finally over, Eger’s attention quickly turned to preparing for the full-time jump to the Western Hockey League.

He says he knows what he must do to make the Broncos opening-night roster.

“I just have to stay consistent,” he stated. “I need to make sure I’m contributing to my team every practice and every game. I need to stand out above other players. I think the expectations are going to be high. You have to be really consistent throughout the year to contribute to the team, especially in this league. It’s a good league to be in and the competition is going to be that much higher.”