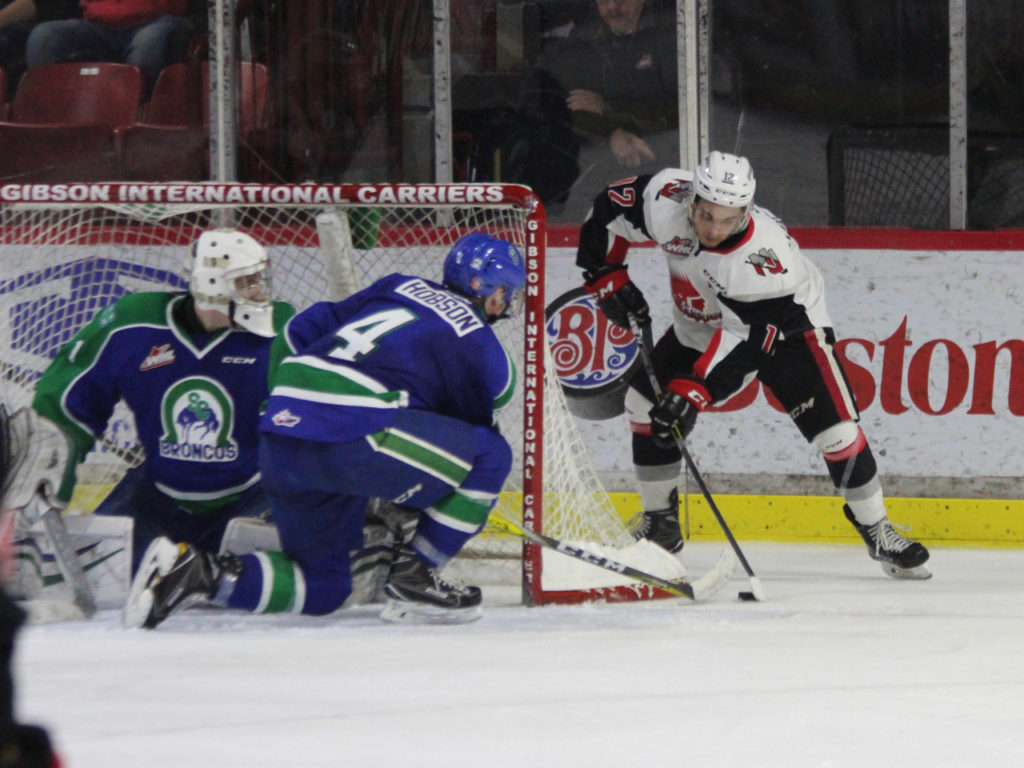 A night after a thrilling 2-1 win over the Moose Jaw Warriors at the Credit Union i-Plex, the Broncos closed out the regular season portion of their schedule to the Warriors at Mosaic Place and dropped a wild 10-5 decision.

With many regulars out of the lineup for rest purposes in a game that meant nothing in regards to the standings, the Broncos gave third-string goaltender Bailey Brkin his first career WHL start.

It was a tough outing for Brkin and the Broncos as they were outshot 17-3 in the opening frame but yet the score was 3-2 Moose Jaw through 20 minutes. Riley Stotts scored his ninth of the season just 45 seconds into the game, but Brett Howden tucked in the first Warriors goal less than three minutes later.

Regina, SK native Conner Chaulk tipped in the Broncos second goal on a Swift Current power play, giving the Broncos a 2-1 lead but it did not last long. Jayden Halbgewach and Noah Gregor each added a goal to give Moose Jaw the 3-2 cushion.

The offensive output continued for both clubs into the second period as both the Warriors’ Howden and Broncos’ Chaulk scored their second markers of the evening less than a minute apart before three minutes had been played.

The Warriors would score two more goals, including a hat trick marker from Howden to put the Broncos in a 6-3 hole but forward MacKenzie Wight rifled in his first goal as a Bronco with 1:08 left to narrow the gap to 6-4.

The game got away from Swift Current in the third period as Halbgewachs scored three times to cap off a four goal outing. 20-year-old Broncos forward Ryley Lindgren mixed in a power play goal for Swifty but the Warriors skated away with the 10-5 win.

Swift Current scored a pair of power play goals on four separate man advantages in the game while Moose Jaw finished the evening 3/6. Shots on goal were 53-21 in favour of Moose Jaw. Brkin backstopped 43 Warriors shots in his WHL debut for the Broncos.

These two East Division rivals will commence Round One of their 2017 WHL Playoffs matchup on Friday, March 24th at Mosaic Place in Moose Jaw for Game 1. Puck drop is 7:00pm CT.

Broncos playoff tickets for Games 3 and 4 in Swift Current are currently on sale. Visit the Stable during box office hours or purchase tickets online at tickets.scbroncos.com.