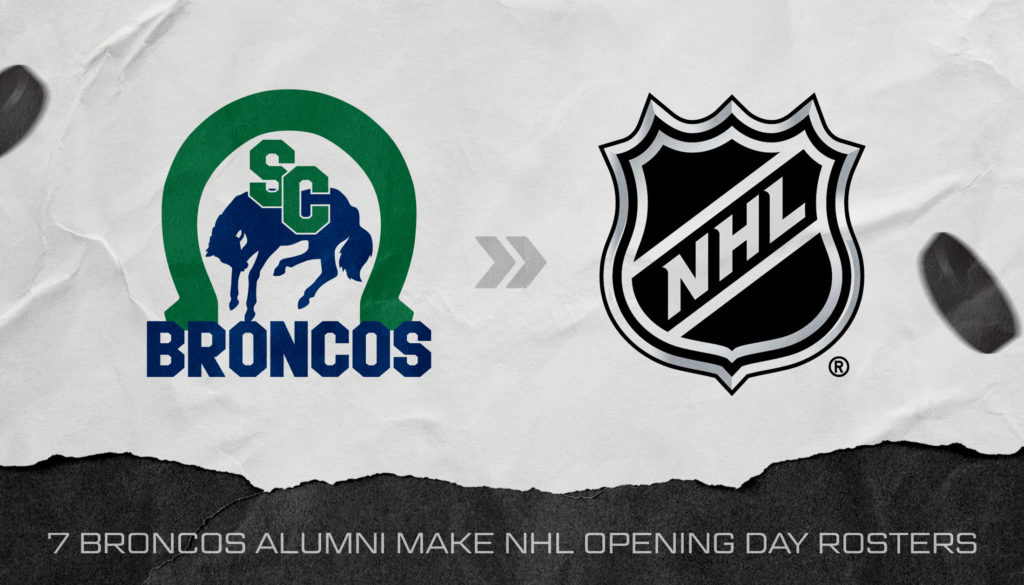 SWIFT CURRENT, Sask. – The Swift Current Broncos are proud to announce that six alumni of the organization have been named to NHL Opening Day rosters as the 2021-22 NHL season begins today.

Jake DeBrusk begins his sixth season in the Boston Bruins organization and fifth with the NHL club. Drafted 14th overall by the Bruins in the 2015 NHL Entry Draft, DeBrusk has played 244 regular season NHL games to date scoring 67 goals and 67 assists. He has also appeared in 59 playoff games recording 16 goals and 10 assists.

Debrusk was drafted in the seventh round, 137th overall, by the Broncos in the 2011 WHL Prospects Draft and would record 146 points in 168 games with Swift Current before being traded to the Red Deer Rebels during the 2015-16 season.

Cody Eakin is set to begin his second season with the Buffalo Sabres and 12th NHL season overall. Originally drafted in the third round, 85th overall, by the Washington Capitals in the 2009 NHL Entry Draft, Eakin has appeared in 632 NHL games with the Capitals, Dallas Stars, Vegan Golden Knights, Winnipeg Jets and Sabres. He has 106 goals and 138 assists throughout his career.

Eakin was drafted sixth overall by the Broncos in 2006 in played 212 regular season games with Swift Current, recording 195 points. He was traded to the Kootenay ICE in 2011 and would help them win the Ed Chynoweth Cup that season.

One of the best Swift Current Broncos players in franchise history, Gawdin finished his WHL career sitting fifth in all-time Broncos scoring with 313 points in 312 games. Drafted fifth overall in the 2012 WHL Prospects Draft, Gawdin was originally drafted by the St. Louis Blues in 2015 but was never signed by them. During his overage season in 2017-18 Gawdin led the Broncos in scoring with 125 points in 67 games, and followed that up by claiming WHL Playoff MVP honours with 32 points in 24 games, leading the Broncos to their first WHL Championship since 1993.

Beck Malenstyn has made the Washington Capitals opening day roster after a tumultuous past 10 months. Suffering a ruptured Achilles tendon during off-ice training, Malenstyn missed the entire 2020-21 season recovering from the injury. He is entering his third season with the Capitals and has played in three NHL games to date.

Malenstyn was acquired by the Broncos during the 2017-18 season and scored 29 points in 38 games before adding 11 points in 24 playoff games, helping the Broncos claim the 2018 Ed Chynoweth Cup.

Lane Pederson switched area codes from Arizona to California over the offseason and is on the San Jose Sharks’ opening day roster. After four seasons in the Coyotes system, including 15 games in the NHL during the 2020-21 season, Pederson was traded to the Sharks for a 2024 fourth-round pick. He scored in his NHL debut on April 2, 2021.

Pederson was acquired from the Red Deer Rebels in the trade that saw Jake Debrusk go the other way. In 99 career games with Swift Current, Pederson scored 39 goals and 60 assists before being signed by the Arizona Coyotes as a free agent, jumping to the AHL for his 20-year-old season.

Justin Dowling is back in Canada after nine years south of the border, making the Vancouver Canucks opening day roster. Dowling had been playing in the Dallas Stars organization for the past nine years, getting in 76 games at the NHL level with four goals and six assists. Dowling was a mainstay for the AHL’s Texas Stars, appearing in 408 games and scoring 97 goals with 201 assists for the Stars. He also helped them claim the AHL title in 2018 by scoring 17 points in 22 playoff games.

Dowling spent his entire four-year WHL career in Swift Current, serving as the team’s captain in 2010-11. He skated in 280 regular season games for the Broncos picking up 81 goals and 161 assists.

Adam Lowry embarks on his eighth season with the Winnipeg Jets and ninth professional season overall. Freshly signed to a five-year contract extension, Lowry has played 460 regular season games for the Jets since 2014, scoring 67 goals with 80 assists. He has an additional 39 playoff games under his belt with five goal and eight assists.

The Broncos drafted Lowry 78th overall in the 2008 WHL Prospects Draft and watched him flourish into a physical force during his final WHL season in 2012-13 as he exploded for 45 goals and 43 assists, capturing the WHL’s Player of the Year award. In four seasons in Swift Current Lowry scored 90 goals and 114 assists in 235 games.

The Broncos would like to congratulate these six alumni, along with all other alumni who are beginning their professional and collegiate seasons in the coming weeks.