Seven Broncos to play at 2022 IIHF World U18 Championship 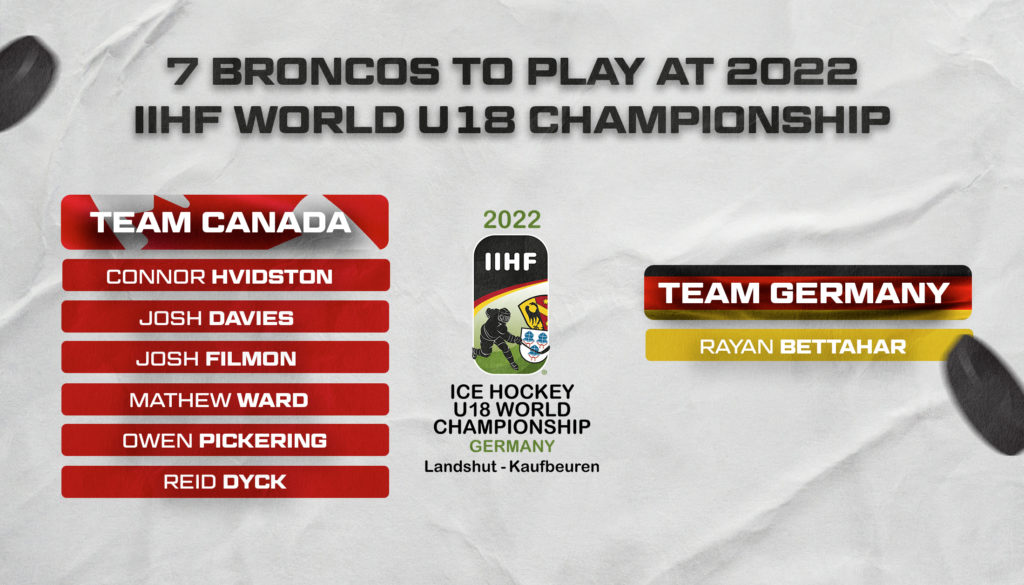 Swift Current, Sask. – The Swift Current Broncos are proud to announce that seven players will play at the 2022 IIHF World U18 Championship in Landshut and Kaufbeuren, Germany. Reid Dyck, Owen Pickering, Mathew Ward, Josh Filmon, Josh Davies and Connor Hvidston will play for Team Canada while Rayan Bettahar will play for Team Germany. The tournament runs from April 23 to May 1.

“As an organization we are extremely proud of our players,” said Broncos general manager Chad Leslie. “All seven of these guys have shown tremendous growth and maturation in their individual development which has gotten them to this point. The opportunity to play for your country is an honour, and I know they will represent the Swift Current Broncos very well.”

Dyck, from Winkler, Man., posted a 6-12-1-0 record with an .884 save percentage and a 4.26 goals against average during the 2021-22 season. He was also named to the CHL/NHL Top Prospects Game where he turned in a brilliant 23-save performance for Team Red. He was ranked 26th amongst North American goaltenders in NHL Central Scouting’s midterm rankings.

Pickering, from St. Adolphe, Man., flourished in his second season with the Broncos, scoring 33 points (9-24-33) in 62 games. His play not only got him an invite to the CHL/NHL Top Prospects Game, but also caught the eyes of NHL scouts. He began the season as a C-ranked prospect before shooting up to 21st amongst North American skaters in the midterm rankings.

Filmon, from Winnipeg, Man., exploded offensively in his second season with the Broncos. After scoring twice in 17 games during 20-21, Filmon posted 23 and 22 assists in 67 games in 21-22, finishing third on the team in scoring. He was the third member of the Broncos invited to the CHL/NHL Top Prospects Game and was ranked 51st amongst North American skaters in the midterm rankings.

Davies, from Airdrie, Alta., combined his speed, strength and shot to become an intimidating force to opposing players in 21-22. Not only did he finish the year with 36 points (16-20-36), he was often found running over opposing players with his punishing hits along the boards and in open ice. He was ranked 127th amongst North American skaters in the midterm rankings.

Hvidston, from Tisdale, Sask., blossomed into a late-round steal for the Broncos during the 21-22 season. Drafted with the 133rd pick in the 2019 WHL Prospects Draft, Hvidston made the transition to the WHL look rather smooth by recording 32 points in 58 games. He also improved his face off percentage by nearly 10 per cent (40.2 to 49.6) from the first half of the season to the second half.

Bettahar, from Rodgau, Germany, was drafted fifth overall by the Broncos in the 2021 CHL Import Draft. In his rookie season in the WHL Bettahar scored once and added 14 assists while patrolling the Broncos blue line. This will be Bettahar’s second time playing at the World U18 Championship as he also represented Germany at last year’s event in Texas.

The Broncos become the only team in Canadian Hockey League history to have six players appear on Team Canada’s U18 roster at one event. Canada opens the tournament against the United States on April 23 at 11:30 CST. The Broncos players will then go head-to-head when Canada plays Germany on April 24.