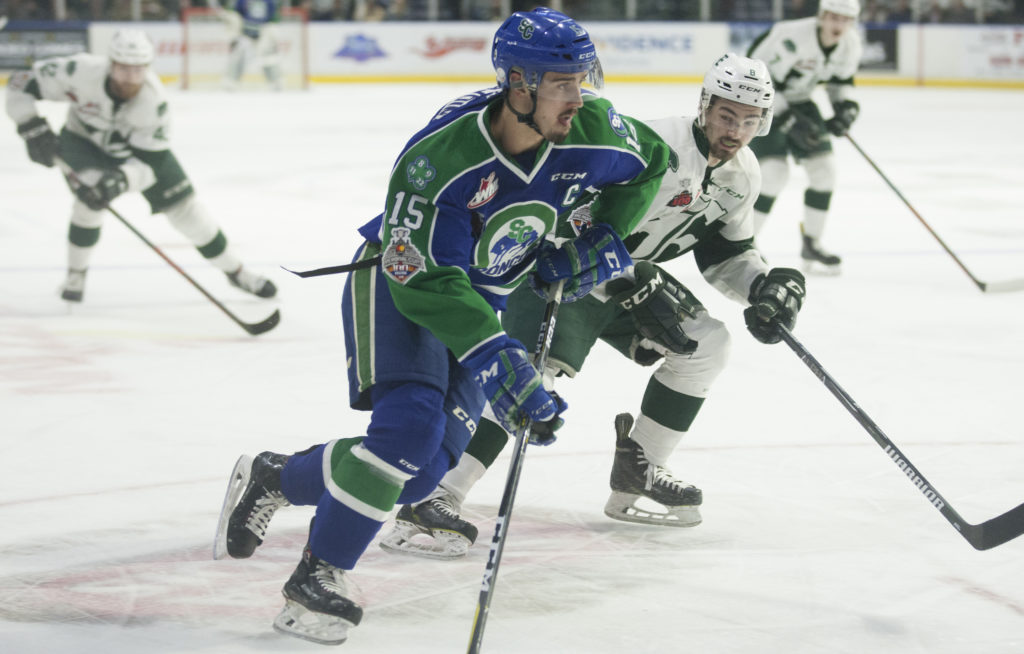 Game Five arrived on Friday night as the Swift Current Broncos looked to finish off the Everett Silvertips with a win on the road but the Tips’ haulted the Broncos mission on this night, doubling up the Broncos 6-3. Swift Current now leads the 2018 WHL Championship best-of-seven series 3-2.

Wyatte Wylie netted the Silvertips first goal as he received a centering ice pass from Connor Dewar and ripped it by the glove hand of Broncos netminder Stuart Skinner at the 6:19 mark.

Shortly after Swift Current’s first power play of the game expired, the Tips doubled their lead as Matt Fonteyne received a pass from Martin Fasko-Rudas and performed a deke in Broncos territory before releasing a low wrist shot through Skinner’s five-hole.

Swift Current got one back on another man advantage try as Calgary Flames prospect Glenn Gawdin capped off a tic-tac-toe play that involved Giorgio Estephan and Aleksi Heponiemi to cut the deficit to 2-1.

Gawdin reached back into his bag of tricks in the second period as he outwaited Hart to get his second goal of the game and fifth in his last three contests overall. The Bronco captain was all alone in the Tips slot area right after he won an offensive zone faceoff directly to Colby Sissons at the far point, followed by the blue liner finding an open Gawdin with a good long pass.

Everett fired 16 shots on Skinner throughout the duration of the second period but Skinner stood tall in denying everything sent his way. The score sheet read 2-2 heading into the third period.

Broncos forward Giorgio Estephan had a golden opportunity in the high slot but his shot rang off the crossbar three minutes into the third period. Moments later, Sean Richards entered the zone and fired a wrister by Skinner who was partially screened to give Everett a 3-2 lead.

Riley Sutter buried his ninth of the playoffs a minute plus later to restore the Silvertips two-goal advantage.

Swift Current kept grinding away however. Rear guard Noah King made a great pinch when needed and scored his first ever WHL goal to thin the gap 4-3.

The Broncos went in favour of the 6-on-5 attack as they pulled Skinner for the extra attacker with exactly two minutes remaining in regulation time.  Everett’s Dewar sealed the Broncos’ fate with a pair of empty netters to send the visitors to a 6-3 loss.

Game Six of the 2018 WHL Championship Series is back at the Innovation Credit Union i-Plex on Sunday, May 13th. Puck drop is slated for 7:00pm. Tickets for Game Six go on sale Saturday, May 12th at 9:00am MT. Season ticket holders have until 1:00pm on Sunday, May 13th to purchase/pick up their tickets.