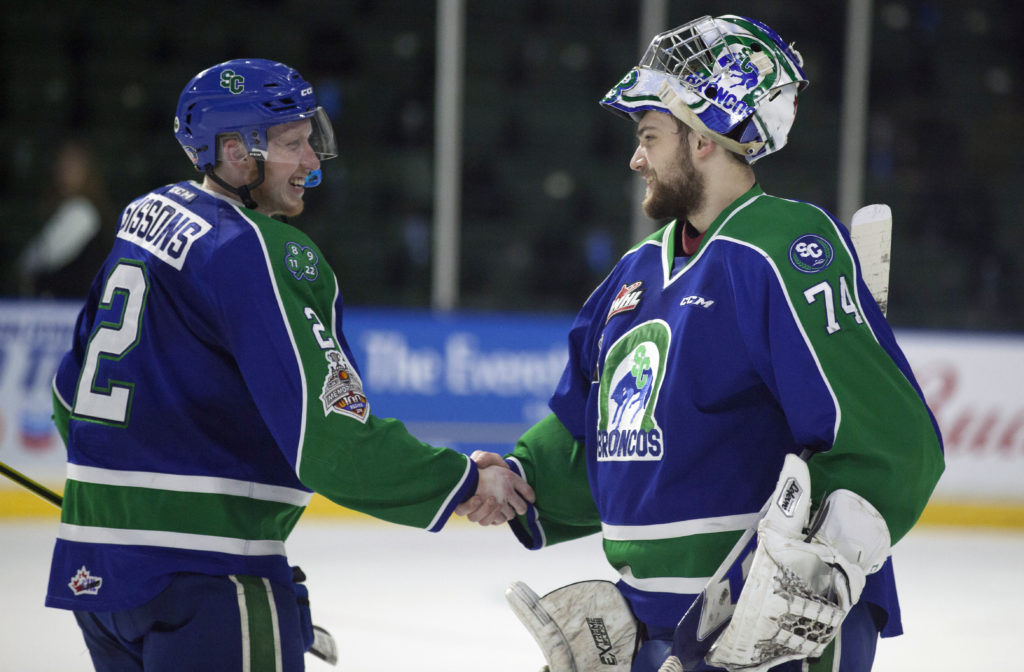 It wasn’t the prettiest of hockey games, but the Swift Current Broncos played a near flawless game as their team defence was outstanding in a 1-0 Game Four win on Wednesday night against the Everett Silvertips in the 2018 Rogers WHL Championship Series.

Both teams gave each other no open ice whatsoever in what was a physical first period. Swift Current had three ma advantages, including a brief five-on-three power play in the first half of the frame but could not solve the Tips defenders.

Shots on goal were 8-4 in favour of Everett heading into the second period where it was more of the same. Colby Sissons and Glenn Gawdin each registered two-minute minor penalties by the Broncos penalty kill was sound in not giving Everett many scoring chances.

Swift found themselves shorthanded on another couple occasions but again were effective when down five-on-four, including a 14 second stint where they were down five-on-three and not giving up many quality scoring chances.

Silvertips forward Sean Richard drew two minutes for hooking and the Broncos wasted no time in recording the first instance of a goal light going off. Sissons entered the zone and wired a perfectly placed wrist shot in the high glove corner off the crossbar and in. Two periods in the books and it was Swift Current nursing a 1-0 advantage.

Defensive hockey was played the rest of the way as Swift Current played an outstanding defensive style to really limit the Silvertips scoring chances. Everett put 11 shots on goal in the third period compared to the Bronco’s five but they kept them on the perimieter and goaltender Stuart Skinner was sharp when he needed to be. Skinner wrapped up a solid performance, turning aside all 32 sthos to earn his fifth shutout of the 2018 WHL Playoffs.

Swift Current held on at the end to edge the Everett Silvertips by a narrow 10 margin to grab a commanding 3-1 series lead in the 2018 WHL Championship Series.

Shots on goal wer 32-19 in favour of Everett. The Broncos power play unit went 1/4 while the Silvertips finished the evening going 0/5.

The Swift Current Broncos have a terrific opportunity in front of them on Friday, May 11th as they can secure their third Ed Chynoweth Cup as WHL Champions with a win. Game Five goes Friday night from Angel of the Winds Arena with puck drop set for 8:35pm MT (7:35pm PT).