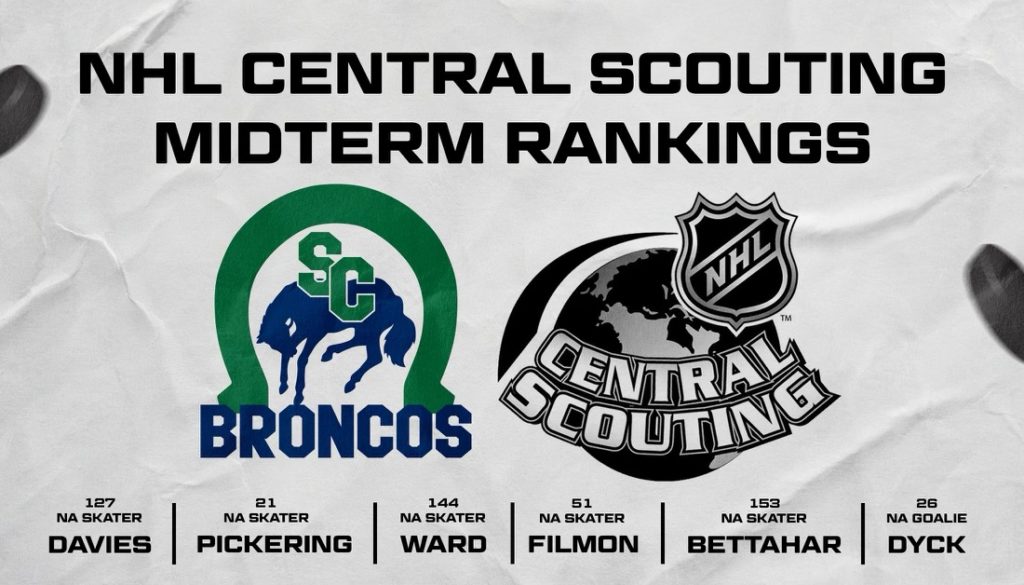 Swift Current, Sask. – NHL Central Scouting released their mid-season draft rankings for the 2022 NHL Entry Draft today, and five Broncos players have been listed. Swift Current is the only team in the Western Hockey League with six players on the list.

Pickering, from St. Adolphe, Man., was named a B-ranked skater on NHL Central Scouting’s November 18 list. The 6’5’’ defenceman has scored six goals and added 14 assists in 32 games so far this season. He has been on an offensive tear since the November 18 list came out with 14 points (3-11-14) in 16 games since then.

Filmon, from Winnipeg, Man., has exploded offensively in his second season in the WHL with 15 goals and 13 assists in 32 games. The 6’2’’ forward recently scored his first career hat trick on December 27 against the Lethbridge Hurricanes, and has been rolling offensively since the month of November with 24 points (12-12-24) in his last 20 games. He was named a C-ranked skater in the last NHL Central Scouting list on November 18.

Ward, from Kamloops, B.C., has been a reliable producer for the Broncos since joining them for the 2020-21 season and has carried that over into his second year in the league. Through 32 games this season Ward leads the Broncos in scoring with 12 goals and 22 assists for 34 points. Five of his 12 goals have been game winners which puts him second in the league in that category. Ward is a point-per-game player in his WHL career to this point, with 56 points (18-38-56) in 56 games.

Davies, from Airdrie, Alta., has already set new career highs across the board offensively with seven goals and four assists in 28 games this season. Davies impact on the game can often be heard in the arena with his thunderous checks on opposing players.

Bettahar, from Rodgau, Germany, was drafted fifth overall in the 2021 CHL Import Draft by the Broncos and has provided steady offence from the blue line. Through 29 games Bettahar has scored once and added nine assists, doing the majority of his damage on the power play with nine of his 10 points coming on the man advantage.

The 2022 NHL Entry Draft is set to take place July 7 and 8 at the Bell Centre in Montreal.