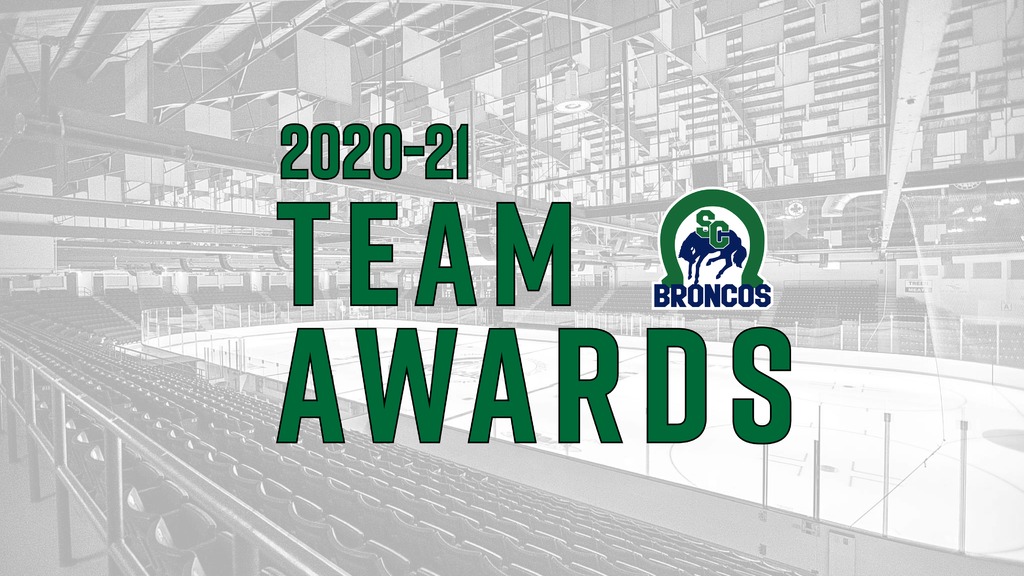 Swift Current, Sask. – Following the completion of the 24-game 2020-21 season at the Subway WHL Hub in Regina, the Swift Current Broncos coaching staff have finalized the latest winners for the Broncos team awards. The winners are as follows. 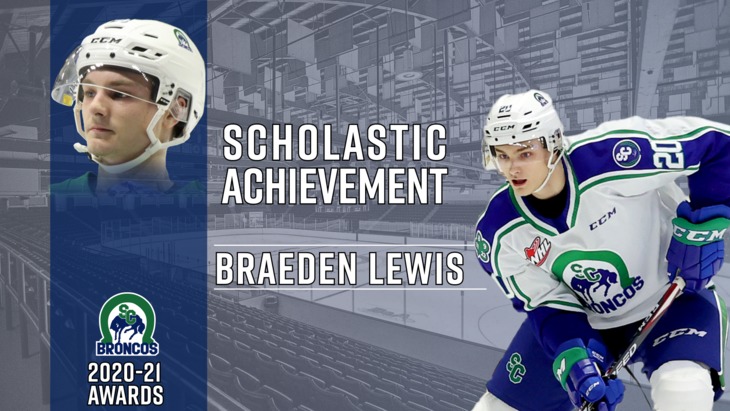 Lewis wrapped up his first season with the Broncos in 20-21 finishing with two goals and four assists in 19 games. While the Broncos hammered out 24 games in 47 days, Lewis stayed laser-focused on finishing his school work from inside the hub, ensuring his graduation from grade 12 from Virden Collegiate Institute with an 82 average.

Humanitarian of the Year – Isaac Poulter 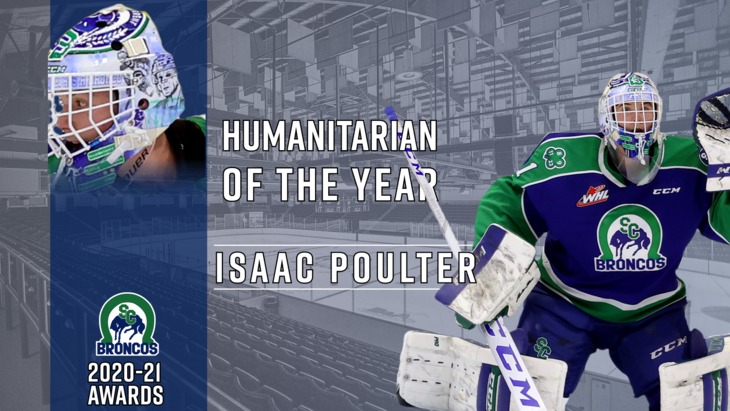 While unable to attend community events in 20-21, Poulter made the most of his virtual school visit to Wymark Elementary by engaging with the kids for significantly longer than the visit was initially scheduled for. During a normal season, Poulter’s number 1 was always the first to appear on the board when players were asked to volunteer for community events.

Chairman of the Boards – Eric Houk 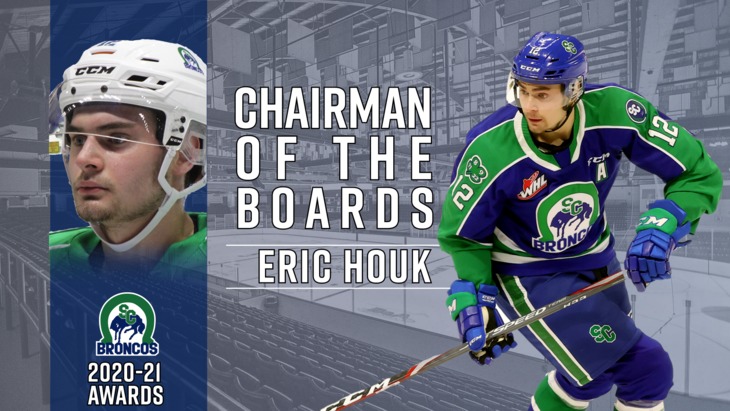 A regular on the Broncos penalty kill over the past few seasons, Houk continued his gritty style of play inside the Subway WHL Hub, laying his body on the line to block shots while not shying away from physical contact every night. With his 23 games played in 20-21, Houk moved up nearly 40 spots on the Broncos all-time games played list. 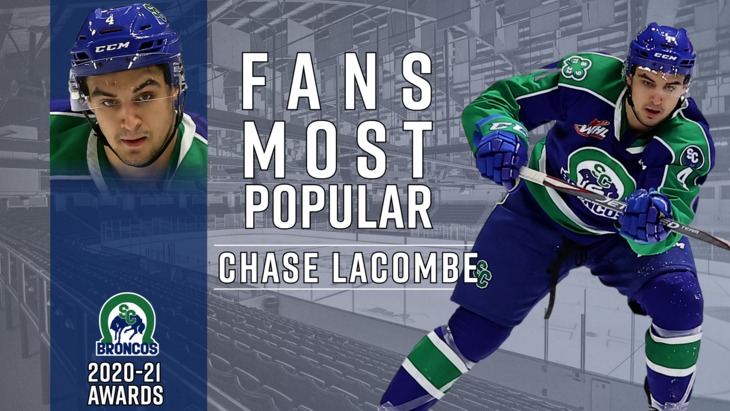 After more than 30,000 votes were cast on the Broncos website, Chase Lacombe takes the crown as the Fans Most Popular player for the 2020-21 season. Joining the Broncos in the hub following a slew of injuries on the back end, Lacombe became a regular on defence while bringing his trademark easy-going attitude into the locker room and on the bench for his 13 games. 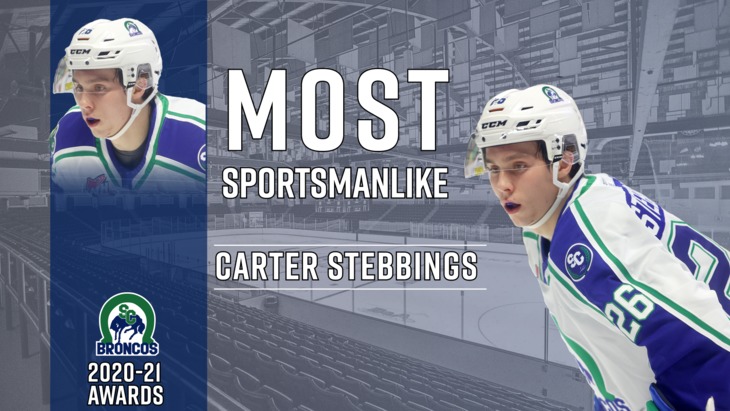 Stebbings had an impressive rookie season in the WHL during the 20-21 campaign, finishing with nine points in 15 games. Despite missing eight games with an injury, Stebbings worked his way onto the Broncos top line and power play with his strong play. While playing plenty of minutes on the ice, Stebbings spent just two minutes this season in the penalty box, getting called for tripping in the Broncos final game of the year against the Prince Albert Raiders. 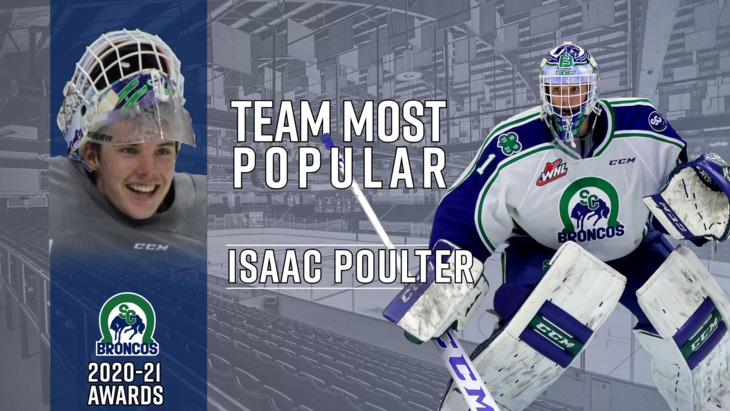 Claiming this award for the second season in a row, Poulter continued to cement himself as a favourite in the locker room amongst his peers during the 20-21 season. Seemingly unfazed by the ups and downs of being a junior hockey player, Poulter added a mentorship role to his resumé in 20-21, taking rookie goaltender Reid Dyck under his wing to help him adjust to the daily challenges of playing in the Western Hockey League. 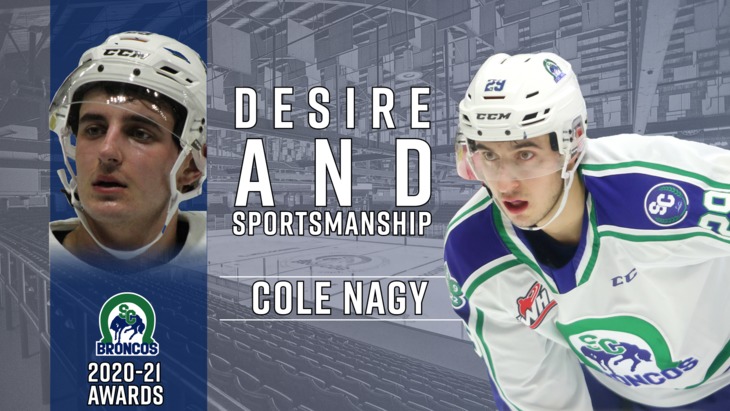 In his second season in the WHL, Nagy raised his game and became the go-to centreman for the Broncos during the 20-21 campaign, lining up for nearly twice as many faceoffs as his closest teammate with 458.  His 55.9 per cent face off rate put him sixth amongst WHL players with over 300 faceoffs in the 20-21 season. Nagy also raised his offensive game to a new level by recording 16 points in just 23 games, beating his 14 points in 57 games during his rookie season in 19-20. He also recorded his first career hat trick on April 25 against Moose Jaw before finishing the season by scoring the tying goal with 1:03 left in regulation against the Prince Albert Raiders on April 28. 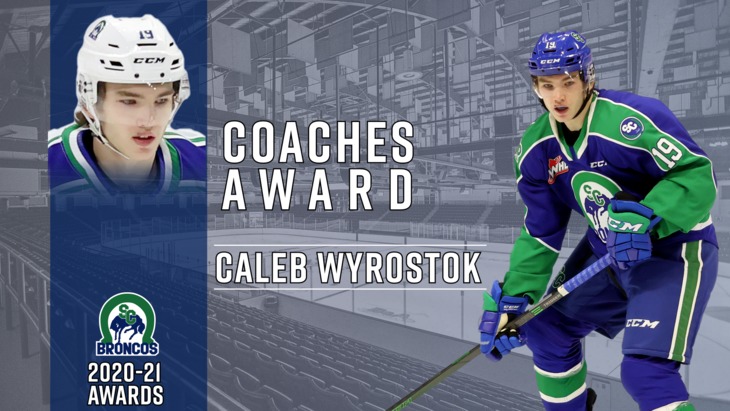 Wyrostok made the jump to the WHL look rather smooth during the 20-21 season, scoring five goals and adding six assists in 22 games. The former 197th overall pick in the 2018 WHL Draft became a fixture on a line with Raphael Pelletier and Josh Davies, giving that line a mixture of grit, speed and scoring touch. Wyrostok played in all situations for the Broncos last season, spending time on the power play and penalty kill. 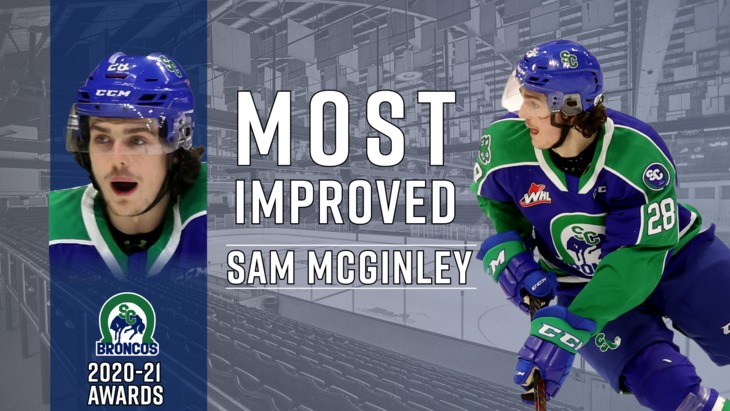 Another repeat winner, McGinley takes home his second consecutive Most Improved award for the 2020-21 season. Already heading into the season as a top-four defenceman, McGinley’s role increased even further with the injuries to Alex Moar and Daylan Weigel. Playing in all situations for the Broncos, McGinley was relied upon to eat up big minutes all season long. 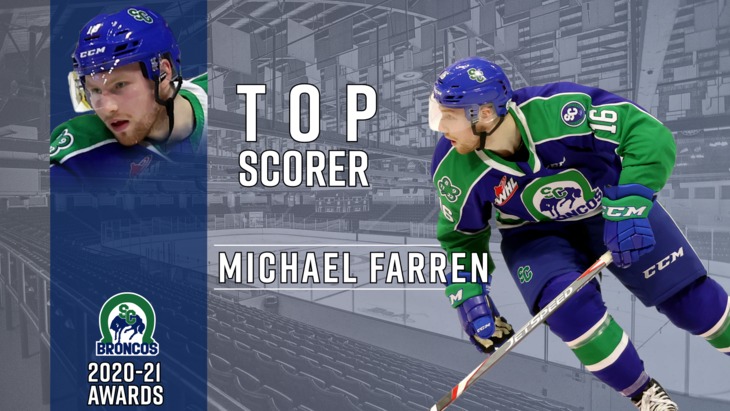 Reuniting with Dean Brockman brought out the best in Michael Farren as he led the Broncos in scoring with 23 points in 24 games. Acquired as a waiver pickup from the Kelowna Rockets in the offseason, Farren’s scoring touch was a welcome addition to the Broncos as he recored nine goals and 14 assists to give him a 0.96 points-per-game average. He recorded three assists in the Broncos final game of the season to claim the award, and finished his WHL career with 107 points in 249 games. The majority of his points came while playing for Brockman, as 75 of his 107 points came with Saskatoon and Swift Current. 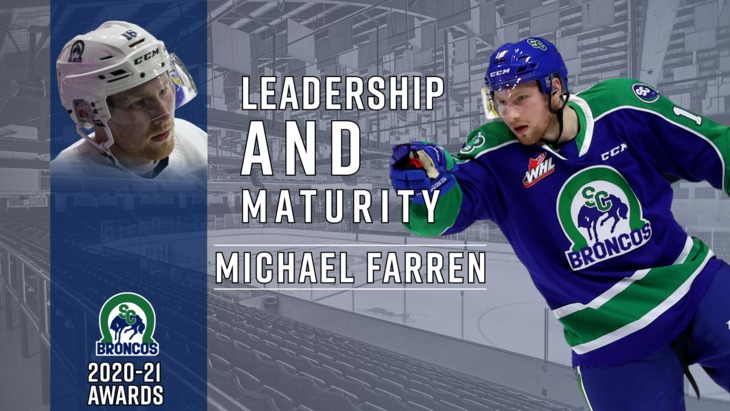 While his scoring touch was a welcome addition to the Broncos, the impact Farren had off the ice might be more important. The most veteran player on the roster, Farren was instrumental in helping the many young players on the Broncos roster adjust to becoming full-time WHL players and helping them understand what it takes to be an effective WHL player. His performance on the ice is what was visible to spectators, but his impact off the ice will surely leave a larger impact on the next generation of Swift Current Broncos. 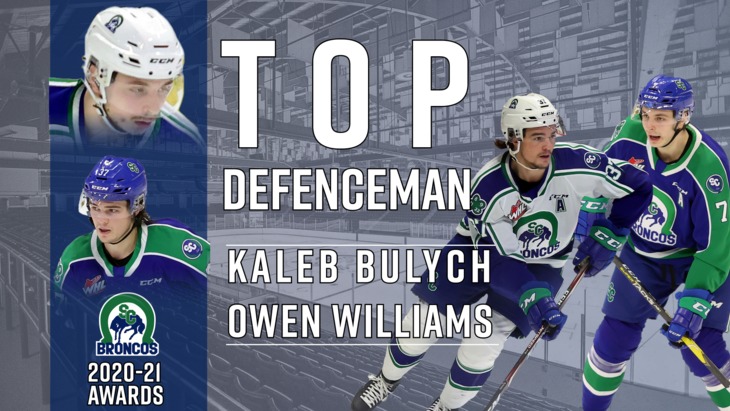 With both of them playing integral roles on the back end, it was impossible to give the award to just one of them. Both veterans of over 200 games in the WHL, Bulych and Williams chewed up ice time for the Broncos in 20-21 finishing the season with an average of 26 minutes per game. Williams added an element of scoring from the blue line by recording five goals and 10 assists in 24 games, while Bulych brought his smooth skating and physicality each and every night.

Rookie of the Year – Mathew Ward 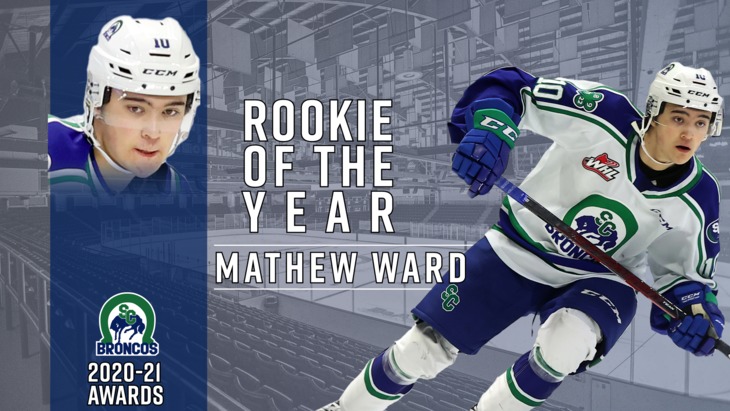 The 14th overall pick in the 2019 WHL Draft came as advertised for the Broncos as Ward finished his rookie campaign with 22 points in 23 games. While it was an abbreviated schedule, the Broncos haven’t had a 16-year-old skater score at that rate since Kimbi Daniels in the 1988-89 season. Playing high-leverage minutes and entrusted to provide offence, Ward showed why he was a first-round pick with his six goals and 16 assists in 20-21. The Kamloops, British Columbia native looks to be a key cog in the future of the Swift Current Broncos. 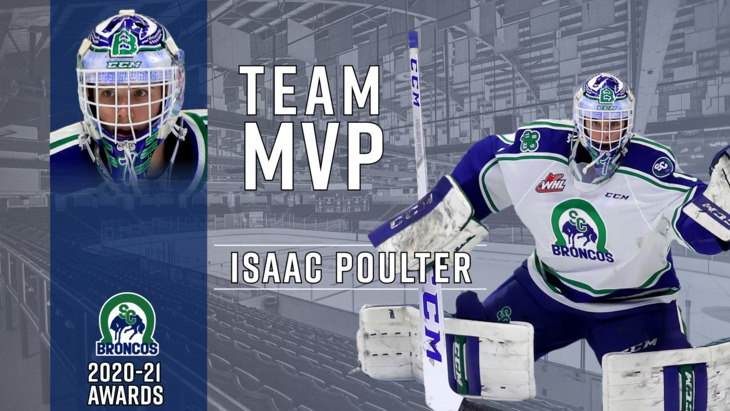 Claiming MVP honours for the second year in a row, Poulter kept his team in nearly every single game he started in the Subway WHL Hub. The Winnipeg native started 16 of the team’s 24 games in the Hub, adding 508 saves to his career total. Poulter continued to work his way up the career franchise records in a number of categories during the 20-21 season as he now sits eighth all time for minutes played by a goaltender with 5,154 and fifth in career saves with 2,963.